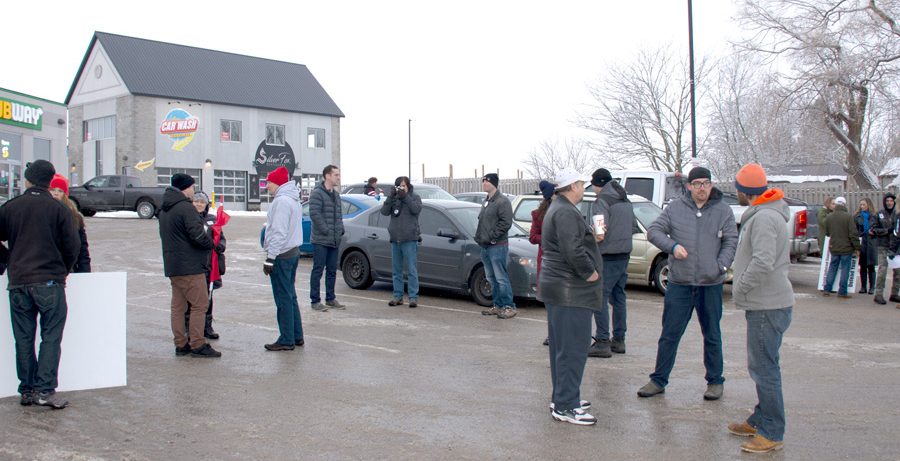 Protest - A group of protestors from Toronto converged outside Futuristic Fitness in Arthur on Jan. 4 to support Mitchell Hewison, owner of the gym, who has decided to remain open to members during the province-wide lockdown. Photo by Drew Mochrie

ARTHUR – Mitchell Hewison says he will continue to defy pandemic lockdown rules despite already being charged by the OPP for doing so.

On Jan. 4 about 20 people gathered outside his gym, Futuristic Fitness in Arthur, to stand in solidarity and protest the widespread provincial closures that remain in effect until Jan. 23.

Hewison is a personal trainer and owner of Futuristic Fitness, and when the government ordered gyms and other businesses to close on Dec. 26, he decided he’d remain open with very strict guidelines for his clients.

“I’m not saying COVID is fake,” he said in a phone interview.

“How is Costco more essential? It’s the large establishments with the high volume of people that are the risk. This goes against the Charter of Rights and Freedoms,” he said.

He posted a video on his website stating as much “and an organization in Toronto reached out to me. To be honest, I didn’t think so many people from Toronto would come,” he said of the protesters.

About 20 people stood maskless in the parking lot on Jan. 4, waving signs that said things like “love over fear,” “hugs over masks,” “Covidism is communism to slavery,” and “forced vaccination is rape.”

It was not clear if any of the protestors were local.

Hewison opened his business last February and barely had a chance to sign up members before the first lockdown occurred in March.

He managed to build his clientele over the summer, “but there’s been a real shift since October,” when COVID-19 protocols were tightened, he said.

Hewison is developing an online coaching program for members worried about attending the gym in person, “but people can still come to the gym and workout safely,” he insisted.

He keeps the gym locked and only members with a key fob can enter. They attend by appointment and numbers are kept to 10 or less.

Hewison said he will continue to open the gym to members during lockdown despite receiving a summons.

He said he thinks he can fight it and win.

“I’ve been doing my research,” he said, outlining procedures used in countries like New Zealand, Taiwan and Finland, where the virus seems to have been contained.

“They blocked all travel, reduced their case numbers and then reopened. Canada never had a hard lockdown like that. Our government is making mistakes and they are putting people in harm’s way.”

This protestor was part of a group that converged outside Futuristic Fitness in Arthur on Jan. 4 to support Mitchell Hewison, owner of the gym, who has decided to remain open during the province-wide lockdown. Photo by Drew Mochrie

Hewison became particularly passionate talking about the 16,000-plus deaths attributed to COVID-19 in Canada and the fact that 90 per cent have been seniors in long-term care facilities.

That is due to a shortage of personal support workers, he said, and has nothing to do with gyms being open or not. And the mental toll of being in lockdown is not good for frail seniors, he said.

“Look, I can’t change what the government does. How does one person make change? But I’m not being careless or irresponsible,” Hewison said.

“I just want to operate my business and we’re remaining open.”

“OPP officers were on scene yesterday (Jan. 4) of a protest at a business in Arthur,” she stated in an email.

“The OPP’s role is to ensure public safety and to keep the peace. The OPP recognizes the rights of the general public, local residents and businesses and our members to a safe environment.”

Rockefeller added, “Police are aware that the business has remained open despite the provincial lockdown regulations and guidelines and as a result the owner has been charged and the matter is before the courts.”

Rockefeller encouraged citizens to report businesses and individuals who are not following COVID-19 protocols.

“Anyone who believes that a gathering is not following the law, is asked to report it to their local municipal bylaw enforcement authorities or police service,” she stated.

“We encourage everyone to do their part to support our health care system and workers at this difficult time and minimize the impact of COVID-19 in all our communities.”