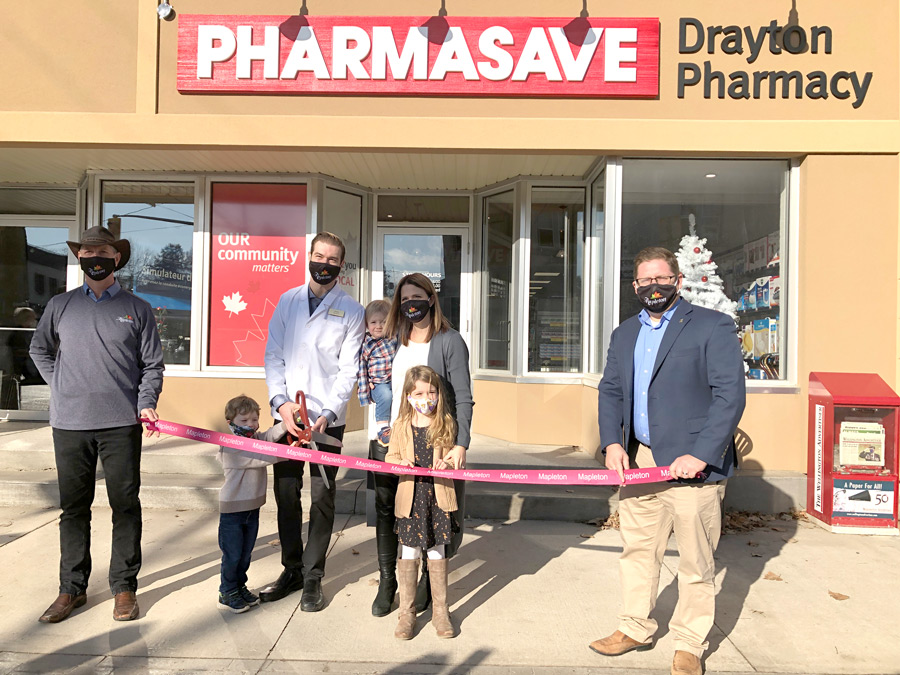 DRAYTON – A ribbon cutting was held for a new pharmacy operated by a north Wellington native with deep roots in both the area and the business on Nov. 14.

“I’ve been looking forward to this day for a long, long time,” said John Walsh, owner of Drayton Pharmacy, which opened for business Nov. 16.

Walsh has worked as a pharmacist for seven years in Mount Forest and Arthur. He chose Drayton to start his own business under the Pharmasave banner because the community felt like a natural fit.

“It’s a small community that I’m used to,” said Walsh, noting Drayton has “a small town rural feel that I grew up with.

“And I feel that there’s a need in the community for a pharmacy,” he added.

For Walsh, it’s also a matter of continuing family traditions. His grandfather, John Walsh, who attended the opening in Drayton on Saturday, started Walsh’s Pharmacy in Arthur in 1952.

“It’s just kind of humbling to be following in kind of the same footsteps. He started his from scratch and here I am kind of doing the same thing.”

“He ran a successful business, he was a family man (with eight children) and he gave back to the community (21-years coaching minor hockey) and today (at 93) still volunteers at the local Historical Society. His story makes me proud and it leaves the feeling that his values are the ones to uphold and emulate as a pharmacist and businessman,” the younger Walsh stated.

“This is what I envision bringing to Drayton and Mapleton Township. Not just a store or a pharmacy – but a place that somehow makes an impact and benefits the well-being of the community. Drayton Pharmacy is about family, community, and balance.”