WELLINGTON COUNTY – The weekend was a record setting one for the region – and not in a good way.

Wellington-Dufferin-Guelph Public Health (WDGPH) reported 278 new COVID-19 cases in the region over the weekend (April 9 to 11), which is the highest total to date for a regular weekend, breaking the previous high of 192 set on Jan. 11.

(There were 297 cases the previous weekend but that included five days over the Easter long weekend).

Cases have risen dramatically in the region over the last several weeks, with active cases now at a record-high of 630.

“After more than a year, we are all exhausted by COVID-19. It has put tremendous stress on every aspect of our lives,” stated WDGPH spokesperson Danny Williamson.

“But, this is absolutely not the time to let our guard down.”

Public health officials have stated that virus mutations, notably the UK variant, are driving the local increase in cases.

“The COVID-19 variants of concern are quickly becoming the dominant forms in our region,” explained Williamson.

“These variants are much more transmissible than the original strain of COVID, and pose serious risks to all of us – including a growing number of younger people.”

“We are on the cusp of a dangerous situation,” said Williamson.

“The interventions put in place by the province and public health are only a part of the solution. Each of us must do all we can to prevent the spread of these variants.”

Wellington County had 46 new cases over the weekend and now has 89 active cases, about triple the case count from two weeks ago (30 on March 30).

One week ago there were 46 active cases in the county.

The county’s seven-day average for daily cases, which is often used to indicate trends, is now 11.43 – a significant increase from just one week ago (5.57).

Dufferin County had 47 new cases over the weekend and now has 123 active cases, a large increase from 74 just one week ago. 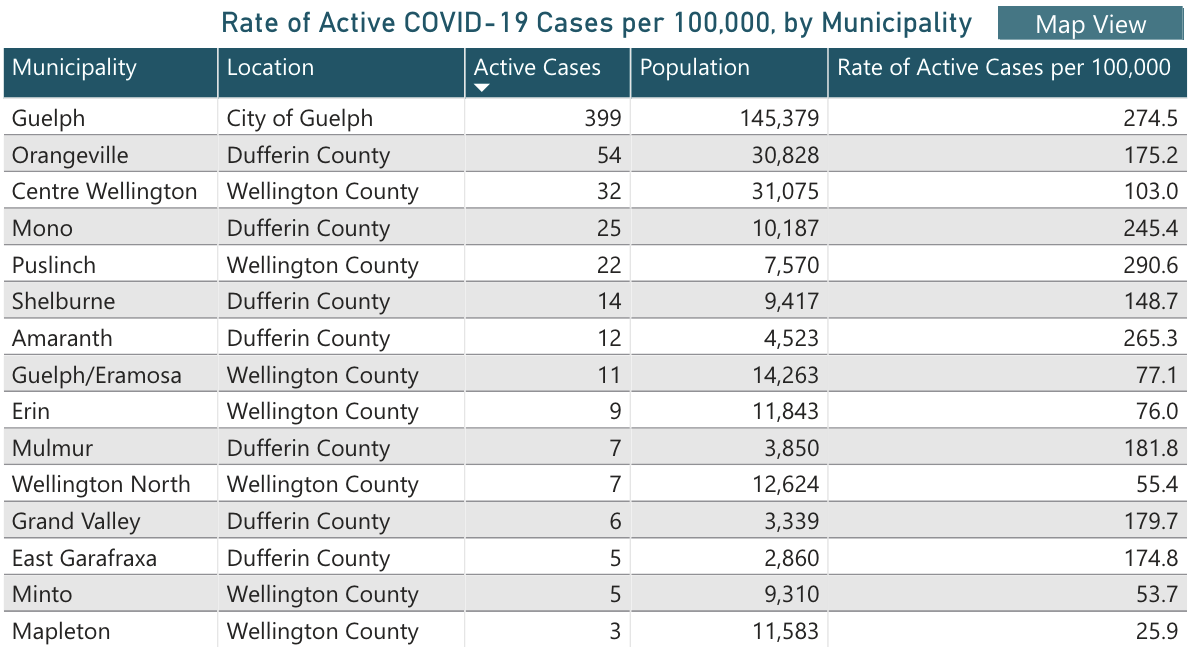 There are currently two facility outbreaks in the WDGPH region:

There has also been an increase in the number of COVID-19 cases in local schools in recent weeks, which WDGPH officials say led to the decision to close publicly-funded schools to in-person learning as of April 7.

The closure will last at least until April 19, following the April 12 to 16 break that was rescheduled from March.

As of April 12, there are 24 schools in the WDGPH region reporting COVID-19 cases.

Emmanuel Christian High School in Fergus is reporting three student cases; it is one of five schools in the region considered in outbreak by WDGPH.

Most cases are in Guelph schools, with just one Wellington County school – Aberfoyle Public School (one case, one classroom closed) – reporting a case.