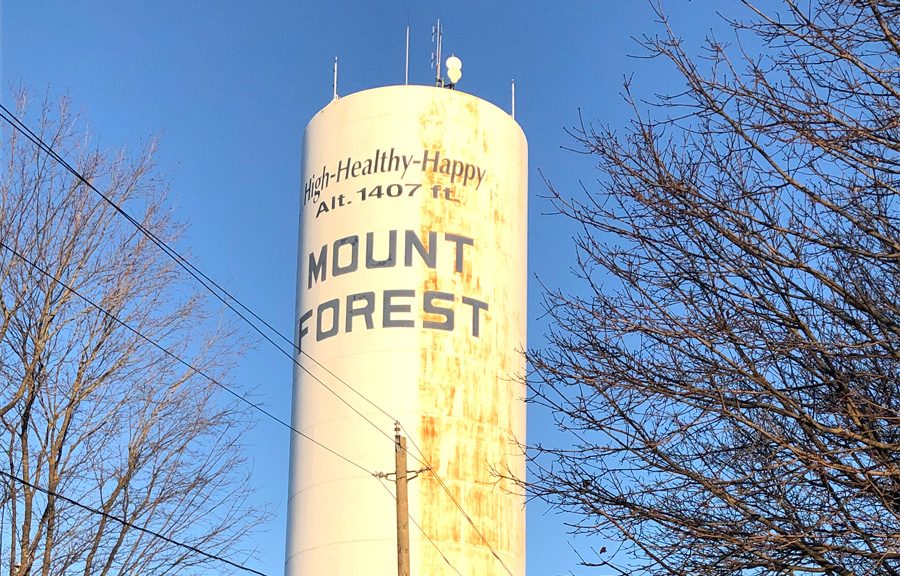 In September, the township updated entrance signs to Mount Forest, and while the new signs retained the town’s relatively high elevation (430 metres [1,407 feet] above sea level), the “High, Healthy, Happy” slogan was replaced with “Simply Explore.”

The sign changed marked the culmination of a lengthy process that included community consultation, but there was plenty of opposition to the removal of the old slogan.

At the time Mayor Andy Lennox noted there were no plans to change the town’s water tower, which also displays the “High, Healthy, Happy” motto.

On Jan. 25 councillor Sherry Burke introduced a notice of motion to ensure the old slogan, along with the community name, will be included in any painting or repainting of the water tower.

“Although the motto has an unknown history and is somewhat of an urban legend, it should be preserved and valued,” Burke said as council considered her motion on Feb. 8.

Along with the slogan, councillors agreed that town’s elevation is also important to include.

“I think it’s a good idea that we keep the altitude there as well,” said Lennox.

“Some people when they see the motto don’t really understand why it says ‘high’ as part of the motto and of course that leads to some misunderstandings.”

Council unanimously passed the motion to retain the slogan on the water tower.

“As a lifelong resident of Mount Forest, I certainly remember it being there as a kid, and I think it’s something that the people of Mount Forest should continue to enjoy.”

Councillor Lisa Hern said, “It is certainly a part of Mount Forest history, and it would be a shame to cover it up.”

All members of council said they received many messages over the last several weeks about the tower and its importance to the community .

“I just wanted to thank the people who had taken the time to write an email to me, or to all the council with their opinions,” said councillor Steve McCabe.

“It’s nice that they have a love of their community.”