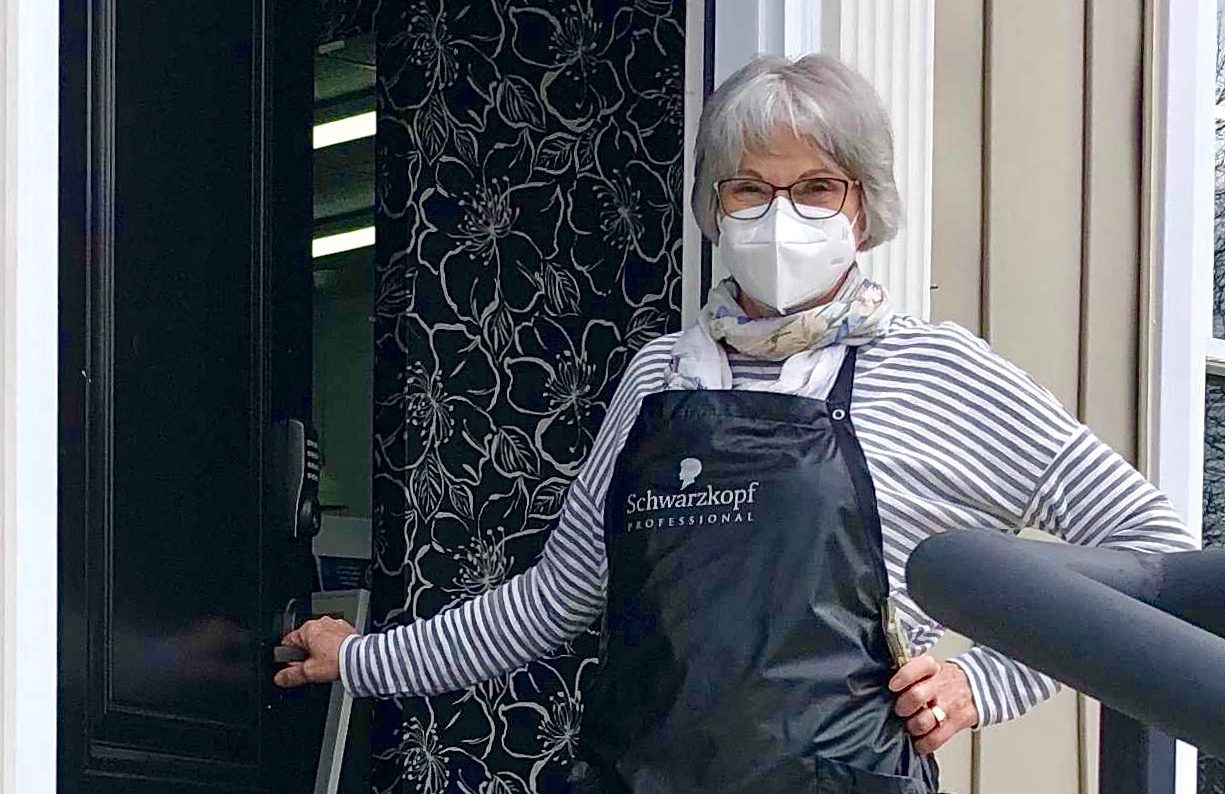 Adell Mueller locks the door on her King Street salon in Mount Forest for the final time. Submitted photo

The popular hairstylist has sold Adell’s Beauty Salon and is retiring after 50 years.

While people have begun posting Facebook tributes to the woman who has taken care of their hair care needs for three generations, Mueller took a break from clearing out the King Street salon to speak with the Advertiser.

Reminiscing about her long career, Mueller gets emotional as she described clients as “more than clients. They’re more like family, my salon family.

“I’m more grateful than people know. All my life I couldn’t understand why people came through the door. I needed them,” she said.

“If I didn’t have the cancer, I’d still be working. I liked working more than anything.”

She was born in Saskatchewan and her family moved to Mount Forest in 1961. A teenaged Adell (Sokoloski) could often be found styling the hair of her school friends and neighbours.

“My sister Delores is a hairdresser and she taught me how to do French twists,” she recalled.

While attending hairdressing school in Toronto, Mueller worked at Annie’s Beauty Salon at Bloor and Bathurst.

Upon graduating she returned to Mount Forest, where she has been styling hair ever since.

“I’ve been doing Mary McLellan’s hair for over 50 years,” she said.

“Jessie Ross (who just died at age 99) was a longtime client. There were so many ladies and gentlemen and teenagers over the years, so many stories.”

Olin Weiser, a local hairdresser, was her first boss and it was with his encouragement that she opened her own shop on Main Street. She moved to the King Street location 25 years ago.

“And I worked out of the house when the children were little – for seven years,” she said.

Her daughter Pam is a teacher in Shelburne, son Corey owns The Dockside Pub in Huntsville and daughter Paula is a hairstylist who worked with Adell until a year ago.

“Having Paula in the salon with me for 23 years was a blessing,” Mueller said.

“She inspired me, kept me young and we enjoyed our clients and their families. A lot of stories are told around a salon chair.”

Several hairstylists, as well as coop students, sometimes two at a time, have worked at Adell’s Beauty Salon. Some now have their own salons.

“I definitely want to thank people (colleagues and clients) for their undivided love, because that’s what it felt like,” said Mueller.

“They weren’t clients, they were my family and they shared so much of themselves with me. They all gave me part of their souls.

“It wasn’t just about hair. It was about sharing the happiness of weddings and births, and the sadness of illnesses and death.”

Mueller explained a client taught her how to do cartwheels, there were water fights, food tastings and shared recipes, exercise demonstrations and even “a few cocktails.”

Anyone who knows Mueller knows her passion for travel.

“I’m sure glad my clients trusted me with their hair. That’s how I made money and you need money to travel,” she said.

“The more people talked about the places they have been to, the more places I wanted to see.”

Unfortunately, her retirement travel plans have been set aside for now.

“Cancer and COVID have dampened those plans,” she said, joking that she wore a mask (because of her cancer) long before masks became fashionable in the current pandemic.

Mueller’s goal, as both her birthday and retirement approach, is to continue to learn something new every day.

She has already taken up sewing and plans to take more sewing classes.

She has set a goal to walk every street in Mount Forest and plans to get to know all of her grandchildren better, all while being there for her children and husband.