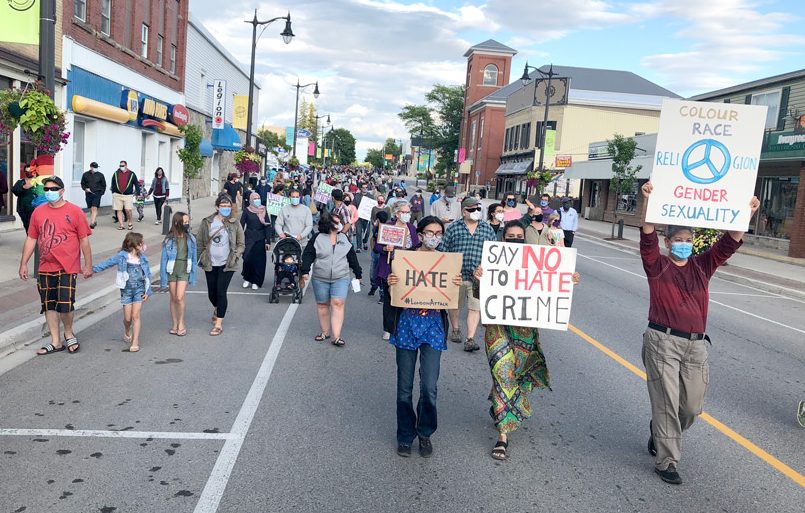 Hundreds attended a solidarity march against hate in Harriston on June 14 as a community response to a racist TikTok video posted from a local residence. The event was organized by members of the Minto Cultural Roundtable and concerned citizens of the community. Photos by Patrick Raftis

HARRISTON – A crowd numbering in the hundreds participated in a solidarity march against hate here on June 14.

“On June 10 an act was committed by a resident of Minto that goes against all of our values and the vision that we share for our community,” Minto Mayor George Bridge told the crowd.

“We gather here tonight to denounce racism in all its forms and to show that this community stands united against hate.

“All families should feel welcome and safe here.”

The event was organized by the Minto Cultural Roundtable in response to a TikTok video posted from a Harriston residence, containing disturbing references to the recent murder of four members of the Afzaal and Salman family in London, Ontario.

The video, posted on the social networking site on June 10, features a man shouting at a Syrian family walking down a Harriston street.

He laughs at his own statements questioning the whereabouts of Nathaniel Veltman, who has been charged in the fatal truck attack on a Muslim family in London. 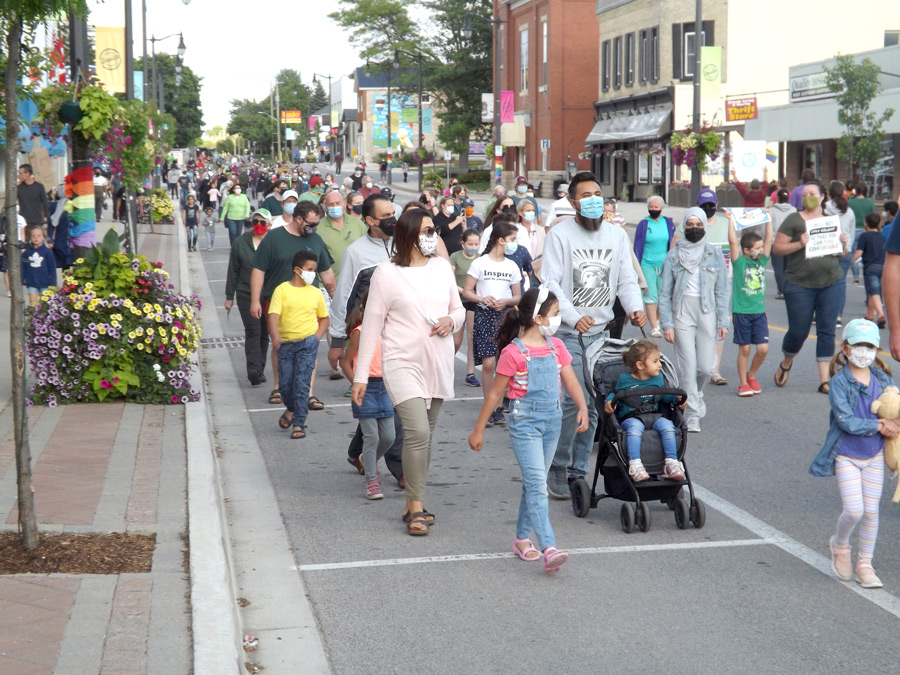 A solidarity march against hate was held in Harriston on June 14 as a community response to a racist TikTok video posted from a local residence. The event was organized by members of the Minto Cultural Roundtable and concerned citizens of the community. Photos by Patrick Raftis

“We could not sit back and watch this disgusting attack on members of our community,” stated Minto Cultural Roundtable chair Peggy Raftis in a June 13 press release announcing the event.

“Our community prides itself on being a place where all families belong. We condemn all racism and stand in support of our Muslim community.”

Participants in the “Solidarity March to stand united against hate”, which was supported by the Town of Minto and County of Wellington, marched from the Harriston-Minto Community Centre grounds to the downtown area carrying signs and shouting messages against hate and racism.

“The anti-Muslim sentiment expressed in this disgusting video is abhorrent to the residents of Wellington County and the Town of Minto, and all efforts must be used to denounce hatred in all its forms,” stated a June 11 release from Bridge and county Warden Kelly Linton.

Wellington County OPP spokesperson Kirk MacDonald confirmed the OPP is aware of the video and is investigating. 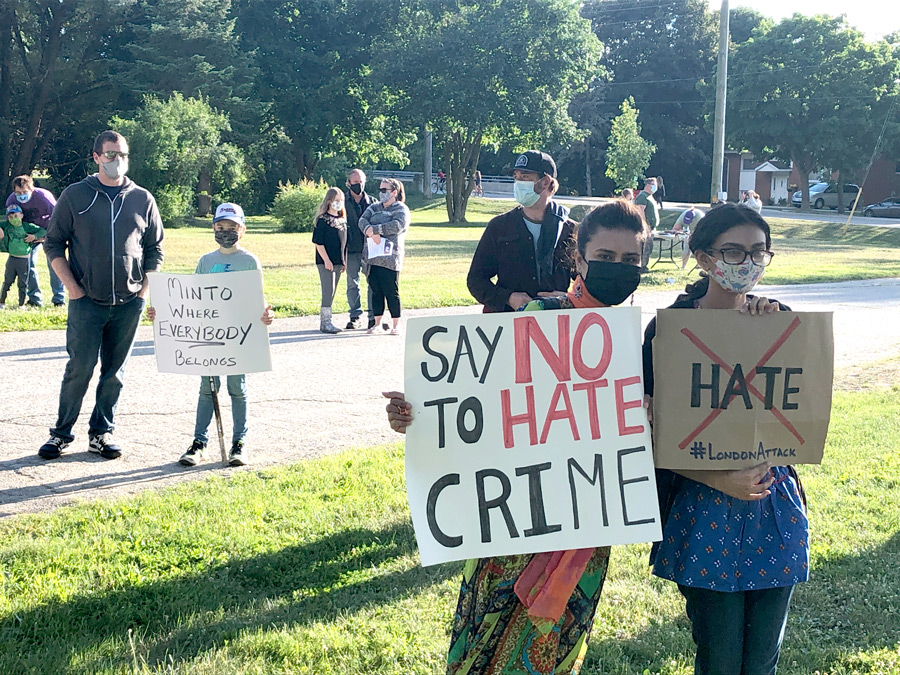 Some participants at a solidarity march against hate in Harriston on June 14 carried signs condemning racism and hatred.

Police have said the family was targeted due to its Muslim faith.

Veltman, 20, was initially charged with four counts of first-degree murder and one count of attempted murder. On June 14, federal and provincial crown attorneys added terrorism to the charges Veltman faces.

“Words are not enough and we need to commit to allyship and action,” said Raftis at the march on Monday night. “Tonight we are standing in solidarity and we are committed to working together,” she added.

“Whether it’s getting educated, listening to the people experiencing racism, speaking up against it – just make a commitment.” 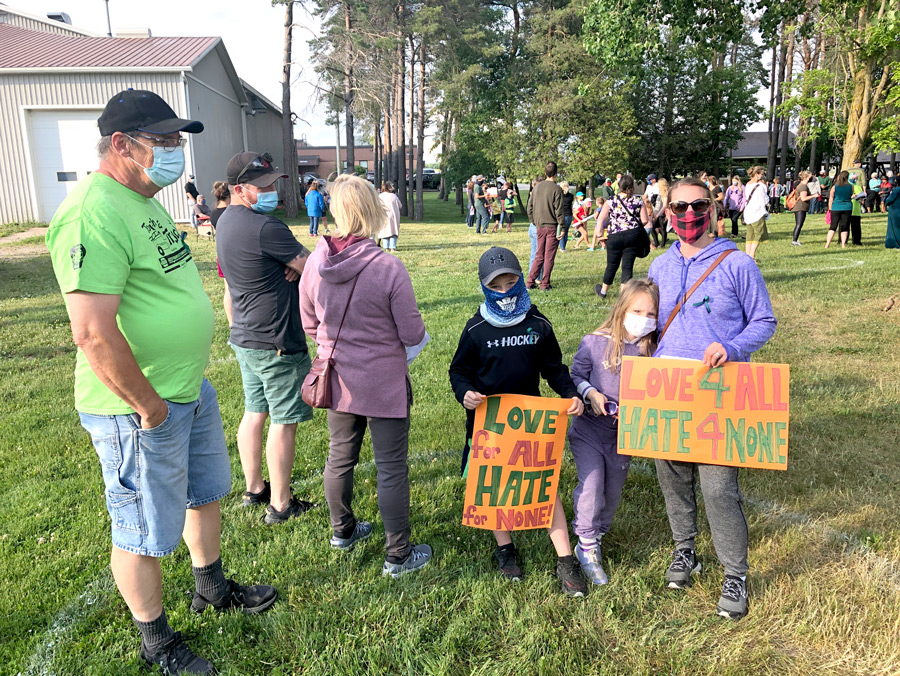 Participants at the march on June 14 carried signs condemning hate and racism.

Terry Fisk, chair of the Minto refugee settlement committee, said Ahmad Almohamad, who came to Canada five years ago through the committee’s sponsorship, recently told him “he was so happy that he lived in a town like Harriston where something like what happened in London would never happen.

“And within a day the video was on TikTok. We can’t express how disappointed we are that something like this would happen in our community.

“(Almohamad) came to me after he saw the video on TikTok and said his wife and his oldest daughter wouldn’t leave the house after seeing it.”

A Harriston native, Fisk said he knows know the video “is not indicative of what goes on and what the feelings are in this community.”

However, he added, “I also know that we can’t be complacent … we have to, as a community and as citizens, learn why people think that way, what makes them feel that way, and then we have to help them change their feelings and change the way they feel toward others who are not the same colour or the same ethnicity as them.

“There is no place anywhere, and certainly no place in Harriston or Minto, for those kinds of feelings.”

Almohamad, who Raftis described as “a leader in the local Muslim community,” addressed the gathering in both English and Arabic. 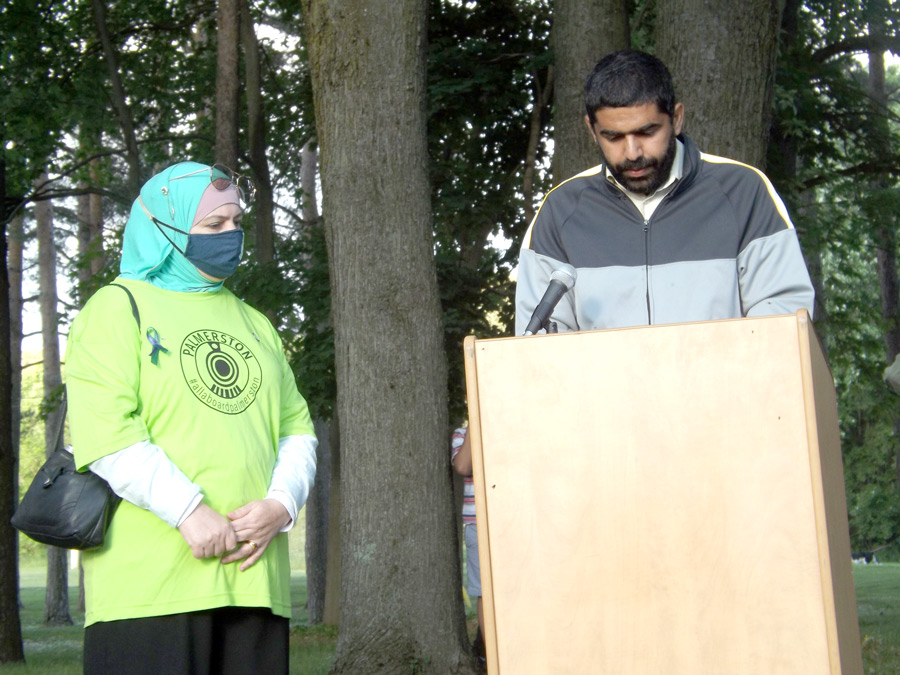 Ahmad Almohamad, right, with the aid of County of Wellington settlement services worker who translated for him, addressed the gathering at the solidarity march against hate in Harriston on June 14 in both English and Arabic. He called for the community to “work together to fight hate.”

“I thank the Canadians who brought us to Canada and saved us from the war in Syria. We came here full of hope and looking for a full and better life for us and for our children,” he said.

“We were shocked, surprised, sad to hear about the family in London. On behalf of the Syrian community in the County of Wellington I denounce all hate crimes. I call for action to stop Islamophobia, to stop hate. Let’s work together to fight hate.”

Following the walk, Wellington County settlement services program manager Colleen Brunelle joined other speakers in a candle-lighting ceremony recognizing both the lives lost in the London attack and the 215 indigenous children who’s graves were recently discovered at the former Kamloops Indian Residential School. 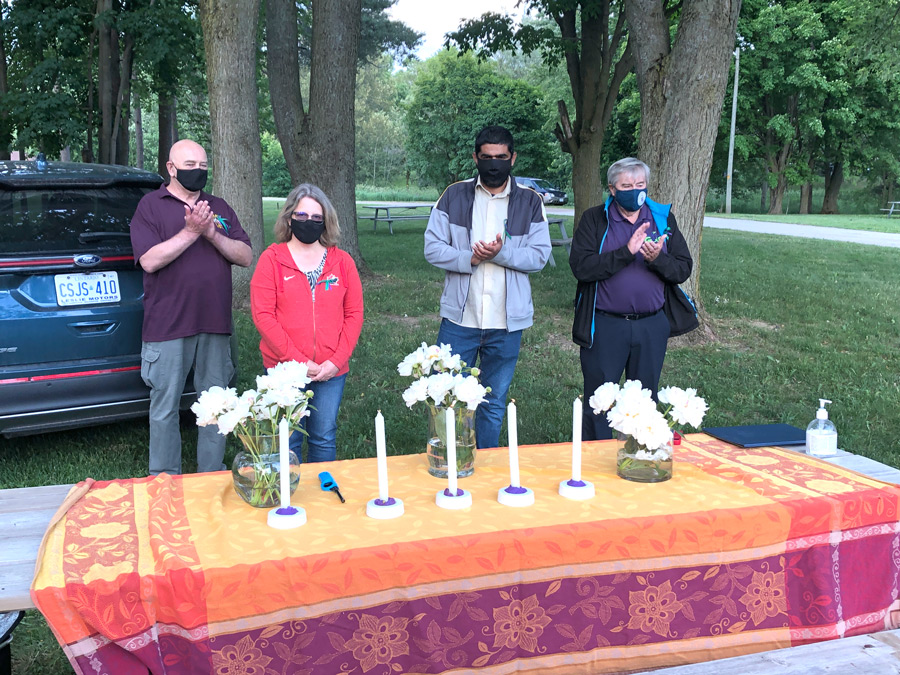 From left: Terry Fisk, Krista Fisk, Ahmad Almohamad and Minto Mayor George Bridge participated in a candle lighting ceremony at a solidarity march against hate held in Harriston on June 14.

Brunelle also conducted a smudging ceremony and provided a land acknowledgement to open the gathering.

As the event came to a close, another member of the area’s Syrian community, Mohammad Alhawari of Drayton, asked to speak.

“When the sad story happened in London, I was following the news and I saw an old lady was talking and she said ‘we came to Canada to feel safe but we don’t feel safe.’ That broke my heart,” Alhawari said.

“And to be honest her feeling is shame on all of us. Canada is not just a map. Anyone who lives on this map is meant to be Canadian and we all have a responsibility to live together peacefully and lovingly.” 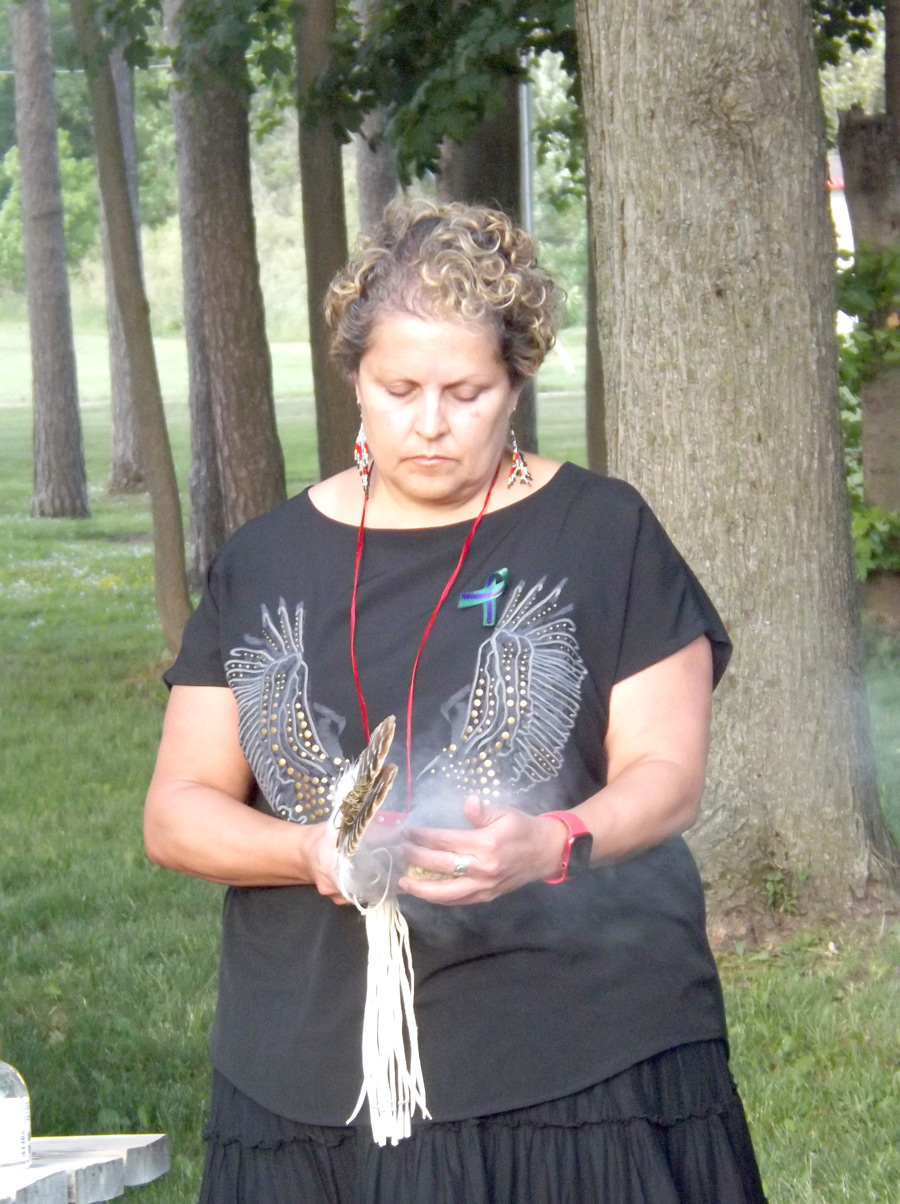 Wellington County settlement services program manager Colleen Brunelle joined other speakers in a candle-lighting ceremony recognizing both the lives lost in the London attack and the 215 indigenous children who’s graves were recently discovered at the former Kamloops Indian Residential School. Brunelle also conducted a smudging ceremony and provided a land acknowledgement to open the gathering.