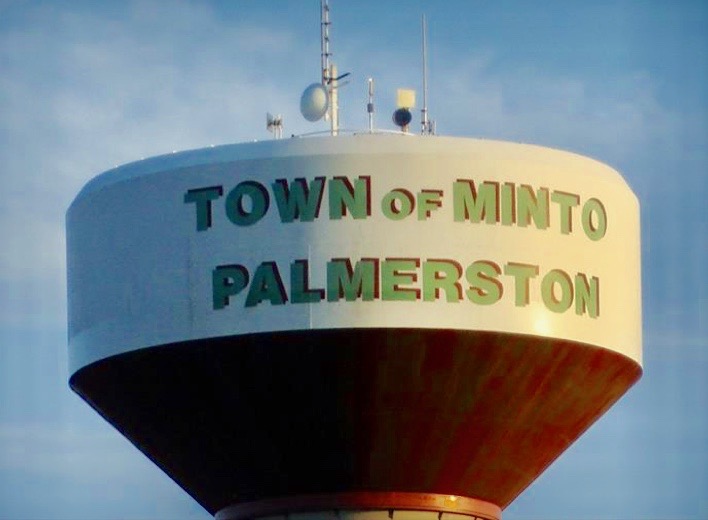 Minto council has approved a tender for repainting the water tower in Palmerston for $224,200. Town of Minto agenda image

Rogers noted the town’s bulk water policy limits sales to a maximum of 0.725 per cent of the previous year’s water consumption.

Total bulk water taken in 2020 equalled 0.26% of the total volume of water used in the Minto water systems (Harriston, Palmerston, Clifford and Minto Pines) in 2019.

Council received the report for information.

Also at the meeting, council approved a staff recommendation to award a tender for the repainting of the Palmerston water tower to Jacques Daoust Coating Management Inc. for the total price of $224,200.

“We ended up getting five tenders back in. I believe that they are good prices,” said Rogers, noting that the Jacques Daoust quote was the lowest price.

“This is a company that’s been in business painting towers for 40-plus years and comes highly recommended.”

The highest bid for the project, at just over $508,000 was submitted by MacDonald Applicators of St. John New Brunswick, but two others were within $25,000 of the successful bid.

A staff report from Rogers indicates the tower, built in 2003, underwent a routine inspection in June of 2020 and exterior recoating was recommended within two years.

“This is an overcoat. That means we paint over the existing paint that’s on there,” said Rogers.

“Also, when this tower is down we’ll be doing a full wash and touch ups on the inside and an inspection as well.”

Councillor Ron Elliott asked if the colours and lettering on the tower would remain the same.

He noted the tower was originally painted to fit in with the colour scheme at the Palmerston Railway Heritage Museum.

“Right now the plan is to keep it the same unless there is some concern brought to light,” said Rogers.