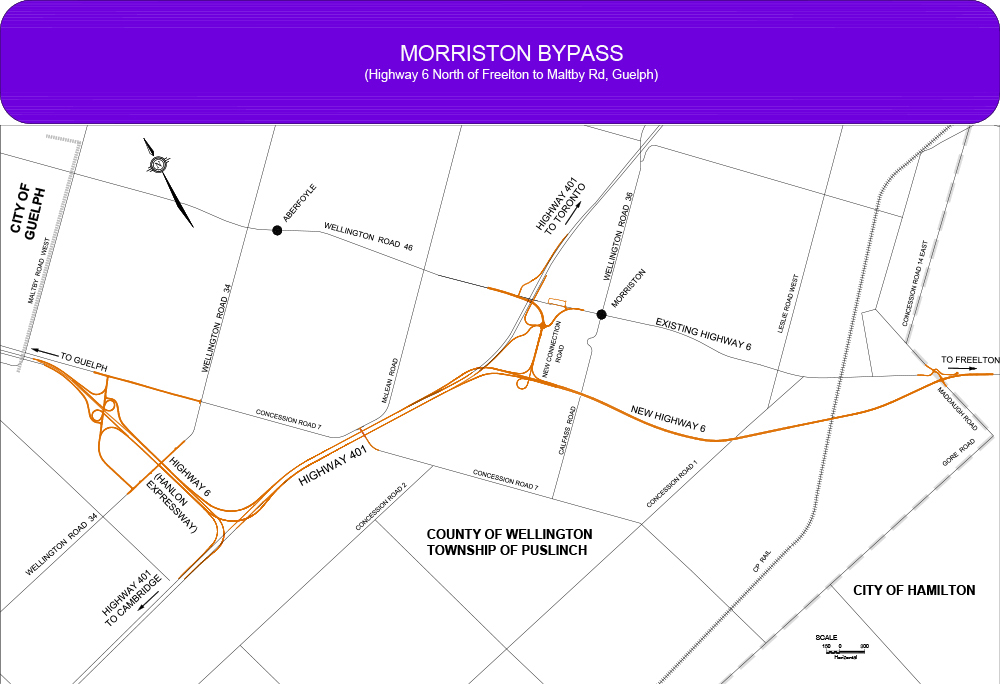 ABERFOYLE – Puslinch Mayor James Seeley has reiterated to the government the importance of keeping the Highway 6 Morriston bypass on the province’s radar.

On July 17, the mayor noted the Minister of Transportation recently changed again, with the appointment of Caroline Mulroney.

Seeley said he asked staff to forward to Mulroney a letter he had sent to previous Minister of Transportation Jeff Yurek.

The mayor explained numerous properties have holds placed on them by the MTO for future widening of the 401 as well as the Highway  6 bypass. Some are located next to the 401/Hanlon Expressway and are ideal for industrial growth.

“These lands adjacent to the 401 have been sitting vacant for close to 20 years, all waiting on an announcement of the bypass/widening construction or a release of the holds on the lands,” Seeley states in the letter.

“In conjunction with lands along the 401 corridor, we have lands similarly located along [Highway 6], that have not been developed due to again the lack of an announcement of the bypass.

“These lands located in the area of Maltby Road/Highway 6 North have had multiple offers of purchase not proceed past the due diligence stage … due to the fact that the Maltby/Hanlon highway improvements are contingent on an announcement of the bypass.”

Seeley stated, “The provincial government is promoting Ontario as open for business, however, our roads are closed for business.”

He stated in both May and June there were multiple incidents of “the only multi-lane arterial road that is designed to keep Ontario’s economy moving, doing the exact opposite – the 401 was a parking lot.”

Seeley said Highway 401 was brought to a standstill for a minimum of 10 hours on May 22 – and he wondered what cost that had on the economy.

“Without a bypass this traffic does not have an alternative route,” his letter stated.

“If the province is truly committed to being open for business (facilitating transportation of goods and services), committed to transportation infrastructure, and finally, economic development, we ask that the government commit to the Highway 6 bypass.”

Seeley maintained the bypass will allow traffic to flow south to  Highway 403, thus preventing – or at least mitigating – the economic impact of traffic congestion due to unforeseen events (emergency response).

The Morriston bypass may not be in the GTA, Seeley noted, but the GTA and Greater Golden Horseshoe will benefit tremendously, as the Highway 6 project is not a local issue – it’s a regional improvement.

“Committing to the bypass will provide excellent economic development along the 401 corridor as well as the Hanlon corridor, providing new jobs and excellent tax base increase not on residential properties, all of which would support that Ontario is in fact open for business,” Seeley stated.

In addition to correspondence from Persian investments, Seeley provided the Morriston bypass coalition PDF document, which outlines the business case with the support of significant corporate citizens.

“We really need to focus on the economic development aspects of this project,” Seeley stated.