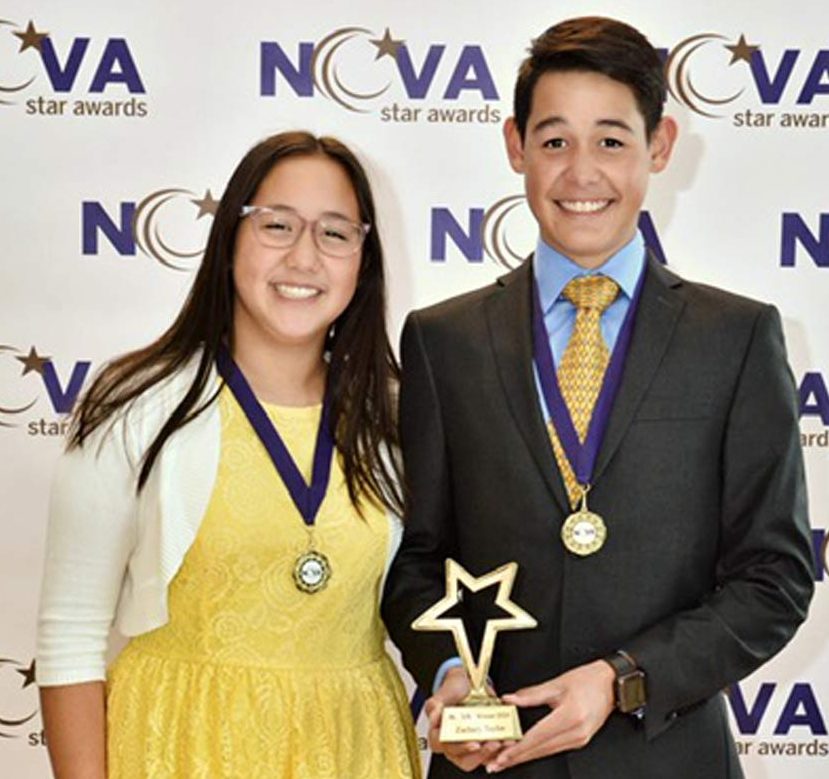 Awards - Local actors Ashley Taylor, 14, and Zachary Taylor, 17, recently made an appearance at the first ever Nova Star Awards for young Canadian actors at the Versailles Convention Centre in Toronto. Both Rockwood residents were nominated for two awards. Zachary won the best male actor in a commercial award and Ashley was the official interviewer for the day. Submitted photo

Zachary Taylor, 17, won for best male actor in a commercial and Ashley was the interviewer for the awards ceremony.

“This one was a YOP commercial,” Zachary said.

“I actually filmed it a few years ago.

“It’s funny because it took me a day of filming to do but … they had a lot of footage and apparently it was very good and it was well received in the end so right now the fourth version of the original commercial is actually airing today and they’re working on a fifth one already.”

The Nova Star Awards are a new Canada-wide awards show for actors aged four to 18. It was supposed to take place in April with a gala format. However, because of the COVID-19 pandemic it was postponed to Sept. 12 at the Versailles Convention Centre in Toronto.

“It turned into a little bit of a drive-thru event,” Zachary said. “So everyone would come with masks and everything and you had a specific time slot, and you’d go in, there was a little red carpet and the backdrop and it was all social distanced.

“You could be up against the backdrop and take off your mask and they’d take a couple pictures of you, then mask back on.”

At that point the young actors would go to be interviewed by Ashley.

“They reached out to me on Instagram and asked if I’d like to do the interviewing and of course I said yes,” she said. “It was really fun.

“I interviewed mostly everybody but of course everyone has their time slot so they were really short interviews.”

While she was given some guidelines, Ashley said she made up most of the questions.

“It was a little difficult to ask the younger kids,” she said. “But when it was older kids it was really nice to talk to them.”

Both Zach and Ashley were actually nominated for two awards each by the Nova Star Awards committee.

“They did their research and came up with all the categories and found a bunch of actors and actresses that seemed to fit it,” Zachary explained.

Ashley was nominated for best web series lead actress in her age group for hosting a Gospel TV craft show and for best throwback project for her appearance on Canada’s Smartest Person Junior.

In addition to his best male actor in a commercial win, Zachary was nominated for best voiceover actor, also for the YOP commercial.

All the nominees were given a bag at the awards ceremony to comply with public health contact restrictions. Every nominee received a medal and winners received a trophy.

While it was a long wait since April to find out if they won, Zachary said it was “cool seeing how they were planning the drive-thru event, having to be flexible with changing the event over.”

When he received his trophy, Zachary said it was a little anti-climactic.

“Ash and my mom were inside doing the interviews and my dad and I, because I had my time slot later in the day, we were waiting outside and this little girl that was working on the staff she ran outside and just handed me a bag and said ‘congratulations you’re a winner’ and then ran back inside,” Zachary said.

“It was really cute, but I didn’t even know what I won because I was nominated for two and … she didn’t tell me which one I had won so I had to figure that out when I went inside.”

Though the pandemic has made it more difficult, the siblings haven’t let the COVID-19 put the brakes on their acting ambitions.

Ashley has been working virtually and filming herself at home doing the Gospel TV crafting show. She also hosted 16 episodes of Toronto Student Media Network’s Virtual Talent Show from March to June. She also hosted a show called Catching Up With Ashley.

Zachary and Ashley also brought their parents into the fold and did a virtual audition as a family for a new Loblaws webseries, which they booked and is set to be released in the near future.

“So everyone was tested and everyone had masks on during the production except for the people that were on camera and it was cool seeing how production can adapt to things but still run safely.”

Another challenge is that Zachary and Ashley both started at new schools this September.

Ashley is in Grade 9 at Bishop MacDonnell Catholic High School in Guelph and Zachary has begun his first year at the University of Waterloo in the science and aviation program.

“It’s hard to do things during school because we’re getting at the age where we don’t really want to leave school for auditions anymore,” Ashley said. “We don’t want to miss school.”

However, they’re still determined to pursue their acting careers.