ERIN – The Environment and Sustainability Advisory Committee of the Town of Erin is granting its annual $500 award to Liz Armstrong. 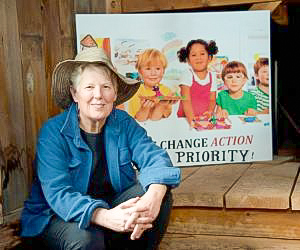 The award recognizes projects, initiatives, education, art, stewardship or other ways that have improved the environment and sustainability of the community.  It recognizes the importance the actions of those in the local community who are working for the common good of both people and the planet, officials state

Armstrong has been an ardent supporter of many environmental causes for many years. She has founded and provided leadership in many organizations in Erin.

She initiated a local chapter of Citizen’s Climate Lobby and has been active in lobbying politicians to bring in a revenue neutral carbon tax and to do more to address the climate crisis.

Armstrong was a founding member of the Climate Change Action Group of Erin (CCAGE), and Transition Erin, two groups that have worked on local initiatives, including an anti-idling by-law, school presentations on local organic food and alternative wastewater treatments.

She led the Erin Eco-Film Fest for many years, finding and showing many relevant and compelling ecological films. She then assisted groups in Orangeville and Georgetown in starting their own local Eco-Film Series.

Armstrong has also promoted local youth activists encouraging and supporting them by attending their Fridays for Future climate marches. She has also inspired many others of all ages to join her in the work towards sustainable living.  She has volunteered with Wellington Water Watchers and as a citizen scientist with the Soil Health Coalition.  She is also an author of A Handbook on Climate Action for Baby Boomers and is one of the authors of Cancer: 101 Solutions to a Preventable Epidemic.

Both humans and the environment in Erin are beneficiaries of Armstrong’s intelligence, passion and kindness, officials note.

“Her actions stem from her generous and inclusive heart and her conviction that we are a community, that she is part of a working whole and that she wants to support people and the environment in the Town of Erin,” officials say. “Liz is a tremendous asset to our community and to the fight to save us from the climate crisis we have already begun to encounter.”