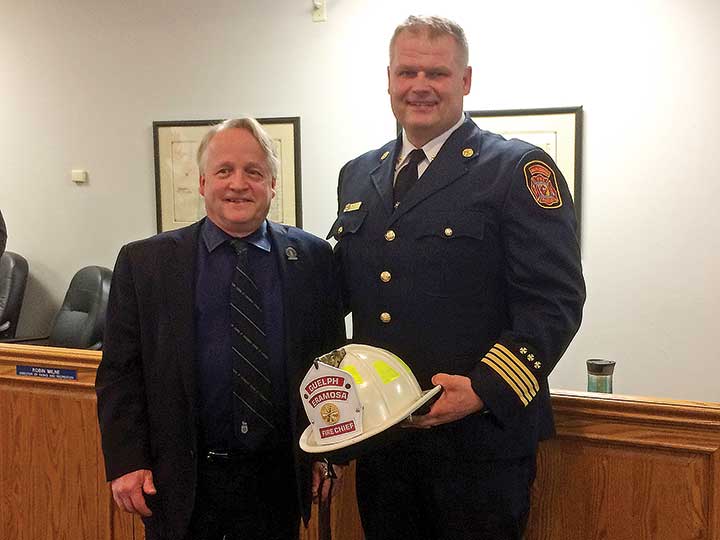 BRUCEDALE – With the selection of Jim Petrik as Guelph-Eramosa fire chief on March 9, the role will no longer be one shared with the City of Guelph.

“It’s a very exciting bylaw regarding the fire chief,” said Mayor Chris White. “I want to congratulate you.”

“Over the course of time, when John Osborne was chief, the deputy chief of the Guelph city department was also our chief,” White said.

“We’ve decided to have our own chief directly, it just makes sense as a stand alone fire department.”

Petrik is a local resident who has served on the Guelph-Eramosa Fire Department for a number of years.

“Council is always pleased with the work done by the fire department. We’re very proud of having our own chief,” White  said as he handed the fire chief’s helmet to Petrik.

The new chief said, “It is an honour to represent this fire department. I really appreciate this and I will do my best.”

White said the township is reviewing its fire services and anticipates a new deal with the city.

“As a result, we thought it was a prime opportunity to have a dedicated chief,” he said.

White  added, “It’s also good for the morale for the people on the fire department. It’s good to have their own chief.

“If Guelph-Eramosa is a stand alone fire department, it doesn’t really make sense for its fire chief to be sitting in Guelph.”

Guelph-Eramosa will still have mutual aid and other agreements with the city and it is expected Guelph firefighters will still cover calls west of Jones Baseline in Guelph-Eramosa.