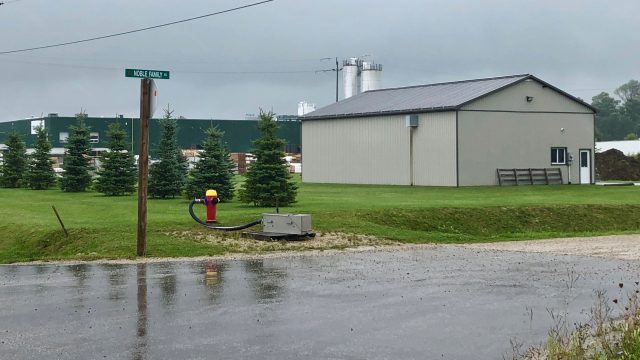 PALMERSTON – Minto council has approved the sale of a large parcel of industrial land here, paving the way for an industrial operation expected to create between 25 and 30 manufacturing jobs in its initial phase.

Guelph-based Hammond Manufacturing Company has purchased the property at 215 Minto Road in the Palmerston Industrial Park.

In 2016 the property went through a provincial certification process and was deemed a certified industrial site.

“The fact that we went through the process has paid off,” noted Minto economic and business manager Belinda Wick-Graham in a staff report presented during the May 20 council meeting.

“215 Minto Road being a ‘ready-to-go’ site has allowed us to attract a reputable and successful company to our community.”

She added, “Hammond Manufacturing Company Limited is excited to be expanding to Palmerston and the Town of Minto and is committed to being a good corporate citizen in our community, and we feel honoured that they have selected Minto as the place to grow their business.”

The report explains the company manufactures a wide range of electrical and electronic enclosures and components that are sold across North America and globally through a large distributor network.

In phase one the company plans to construct an 83,200 square foot building for production of NEMA 1 specification electrical enclosures for the commercial contractor market in Canada and also U.S. markets.

Additional product lines would be established to produce accessories for the DATA RACK markets in Canada and the U.S.

“As the facility matures, other products would be produced here,” the report notes.

The anticipated investment in the first phase is $15 to $20 million.

Phase 2 would involve the construction of a second factory to be built on site as the location to produce metal stampings.

In the first phase the company plans to hire 25 to 30 employees. The company would like to proceed immediately and requested a closing date of June 30.

Wick-Graham indicated the company has secured an engineer and project builder and is aiming to begin construction by October, with production starting in early 2022.

The sale price for the roughly 13-acre property is $520,000. With the initial building expected to be 83,200 square feet, the project is expected to generate $330,304 in development charges for the town.

“This is an exciting announcement,” stated Wick-Graham, who was quick to credit the role of the Northern Wellington Economic Development Partnership in securing the development.

“I really want to acknowledge here our partnership with our friends in northern Wellington,” she stated, noting the company was referred to Minto by Wellington North economic development officer Dale Small.

“If we get inquiries for land and we don’t have what they’re looking for, we like to refer them to our neighbouring municipalities within the county, so that we can try and keep that investment here, and that is exactly what happened in this case.

“Dale was approached and they didn’t have land of this size so he forwarded it to us.”

Deputy mayor Dave Turton said, “That’s pretty aggressive to be starting production in early, 2022.” He noted he has a friend who works for Hammond Manufacturing’s Guelph operation.

“He said that they have good paying jobs … so this is pretty exciting,” he said.

Mayor George Bridge commended council for having the foresight to resist offers to break up the 215 Minto Road certified site.

“It’s always tough to get somebody that wants that whole 13 (acres), that can actually use the whole 13,” said Bridge.

“So, this council was pretty good about pushing some deals off – and a lot of times we managed to get them in our other part of our park – but we didn’t want to break that up and it’s paid off, because this is just exactly … the type of industry we’re looking for, and the type of jobs we’re looking for, to bring to town.”

Council authorized the signing of an agreement of purchase and sale for the property with Hammond Manufacturing Company.