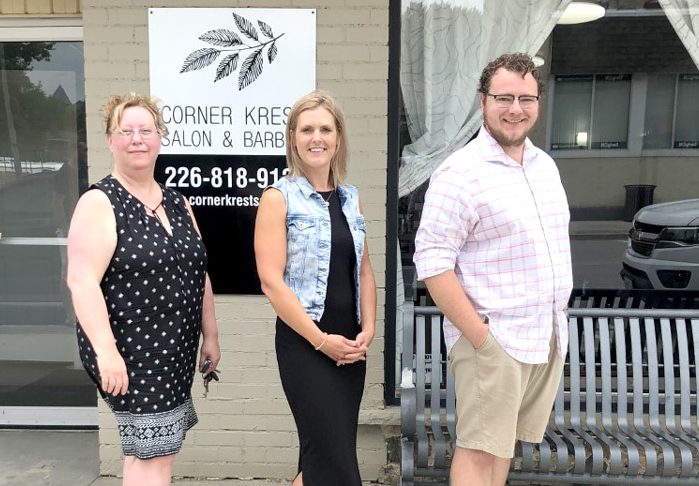 Corner Krest Salon and Barber, located in Drayton, will reopen on July 5. Personal care services, which includes hair salons, are allowed to reopen on June 30 as part of step two in the province’s reopening plan. From left are: hairstylist Kelly Hewitt, owner Destiny Rhame and barber Braedon Heikamp. Submitted photo

WELLINGTON COUNTY – Staff members at spas, salons and barber shops across the county are thrilled to be back on the job this week.

“It’s the best feeling ever. I am happy to get back at it,” said Emma Levesque, owner of Hairapy in Fergus.

For Levesque, reopening even a few days earlier than originally expected is welcome news.

The announcement caught her a little off guard when her phone started blowing up with appointment requests.

“I was at a beach and looked at my phone to see about the announcement. And there was notification after notification from my customers. I wondered, what is going on?” she said in a phone interview. 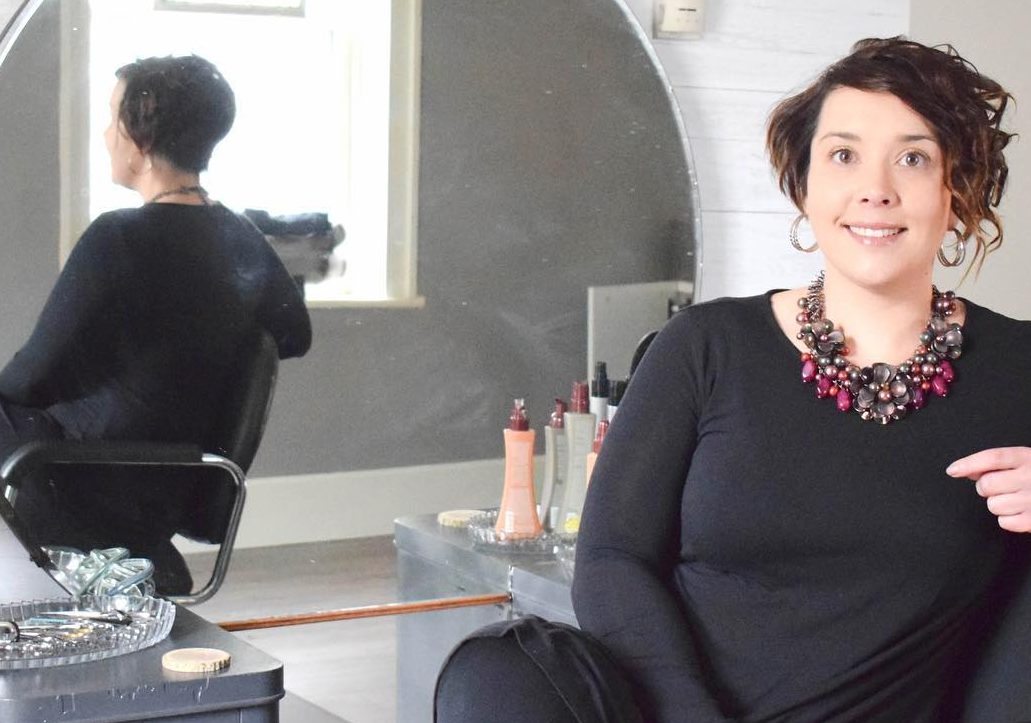 Lindsay Bennett is a registered massage therapist and owner of The Massage Company, with locations in Erin and Kitchener.

While spas have been largely closed during the pandemic, registered massage therapists have been allowed to work with strict protocols in place.

“During the first wave we were shut down completely. I was just coming off of an unpaid maternity leave (I am self-employed and do not pay into EI),” she wrote in an email.  “My plan in 2020 was to get back on track financially but the pandemic shut the world down, so my plan went through a paper shredder.”

Bennett said she, her husband and their two kids moved in with her parents to keep afloat, and she managed to open the Erin clinic in December of 2020.

“The people who were just hanging on financially before the pandemic were drowning during it and I can only hope that someone has helped them like I have been offered help,” she said.

“I am so happy seeing everyone getting the opportunity to bounce back from this.”

Kathryn Wallischek, owner of Shags to Riches in Rockwood, closed her salon doors on April 2 and has been anxiously awaiting her chance to reopen ever since.

Wallischek said she’s been handling the shutdown, but not bringing in her regular income has been stressful.

She’s been keeping herself busy around the house, updating herself on haircuts and new styles, but has also strived to stay in touch with her clients.

“During the time that I was off I did keep in contact with many of my clients, as many as I could,” she said. “Just via text message or a call just to say ‘hi’ and to see how they were doing.”

She recently started going back to the shop to get organized in anticipation for the stage two reopening.

“I’ve been going in a few times now just to make sure I have enough inventory for what I need, make sure the shop was up to par again,” she explained.

This included setting out sanitizing station and making sure her screening sign is up to date at the entrance.

Wallischek explained she did have to go shopping for new supplies and is now well prepared for reopening. Good thing too, because her phone has barely stopped ringing with clients looking to schedule appointments.

“My phone started ringing, I’m not going to lie, at [8am on June 24] before the announcement even came,” she said laughing. “It started at 8am and it pretty well went all day.”

Wallischek, who is currently in the process of rescheduling appointments that were booked prior to lockdown, is most looking forward to seeing her clients again.

“I miss them and I’m just looking forward to going back and hopefully fixing some haircuts that have been done by themselves.”

Destiny Rhame, owner of Corner Krest Salon and Barber in Drayton, said the salon is expecting an extremely busy return to business.

“We are so fortunate to be able to be in a town that supports local businesses,” Rhame said.

“Although the official reopening date is June 30, we will not be opening until July 5, at which point we are expecting havoc.”

Rhame said she has received countless notifications through email, Facebook and the salon’s website from people trying to schedule appointments, many of whom have had to re-book existing appointments.

“As soon as it was announced that we would be able to reopen, we had many appointments immediately scheduled. We actually have had to re-book all of our old appointments before we could book new appointments,” she said.

Rhame was one of many owners who were frustrated that personal care services had to close again during the province’s most recent shutdown, noting there have been no links to any outbreaks in the industry.

“We feel like we have been targeted by the government,” she said.

“Hairstyling is a trade, so why are we not considered essential? Just because we weren’t considered ‘health’ we couldn’t operate, even when other trades still could.”

Rhame said the business has been closed for a total of eight months during the pandemic.

“You go from having income, to nothing. I’m a single mom with a house and a car payment to make.”

Rhame said the uncertainty surrounding lockdowns and reopenings has had a severe impact not only on her business, but on the personal care industry as a whole.

“It’s very stressful because you don’t know when you’re going to go back to work,” she said.

“I see many salons closing because of the pandemic struggle and stylists moving to other career paths that are considered essential because of the uncertainty of constant employment.”

Rhame said having to repeatedly open and close takes a significant toll on mental health, adding it is hard to stay positive and focus on building a business without knowing if another lockdown is around the corner.

“It’s a situation where you feel like you have no say in your job; it’s completely under government control,” Rhame said.

“We follow government protocols so it’s safe and sanitary for customers to come in. It’s frustrating, considering we’ve had very few COVID cases in Mapleton.”

“People aren’t aware of the stress and angst around reopening, Kiers said.

“Overnight, we have to do a complete 180; we are spun around and forced into this chaos.”

Kiers said hair salons and other personal care services should never have had to shut down in the first place.

“Our training has always been very thorough; our licensing is based on being trained around viral control,” she said.

“My argument was why can’t we be open when we are trained? There’s been no spread of COVID linked specifically to hair salons.” 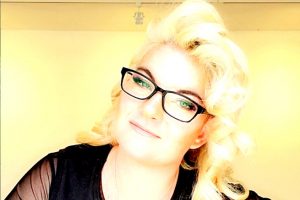 She argued many other trades don’t receive the specialized training around viral control that employees working in the personal care and hair salon industries do, but they were still allowed to operate during pandemic lockdowns.

Kiers said the pandemic lockdowns have been devastating, financially and personally.

“When you’re an entrepreneur, there’s a lot of pride and dignity in paying for yourself. You pay to have control over your reality, and that was ripped away,” she said.

“I made all of these changes to adjust, just to be told to close again.”

Kiers said she believes the personal care industry has been damaged during the pandemic. She said changes that have occurred are likely to cause long-term impacts and lead to unsafe practices, as more people have begun freelancing.

“People have been forced underground and have begun working out of their homes. This is going to lead to a dire situation for the industry,” she said.

Kiers was also critical of the OCOT (Ontario College of Trades).

“Doug Ford said he would get rid of OCOT when he campaigned. The fees are too high, and they aren’t helping us. In April of 2020, OCOT was supposed to be disbanded,” she said.

“Here we are, falling through the cracks with no one looking after us. There’s been no acknowledgement on the impact to our trade.”

Kiers said many small businesses don’t have a lot of padding or a rainy-day fund available to them. She called the personal care industry “deeply undervalued” and said if the government decides to implement another lockdown, businesses in the industry should be allowed to remain open.

“We can keep people safe and still operate,” she said.

“I want to get back to providing physical and mental health care to our clients. People don’t understand the value to having someone to talk to and care for them.”