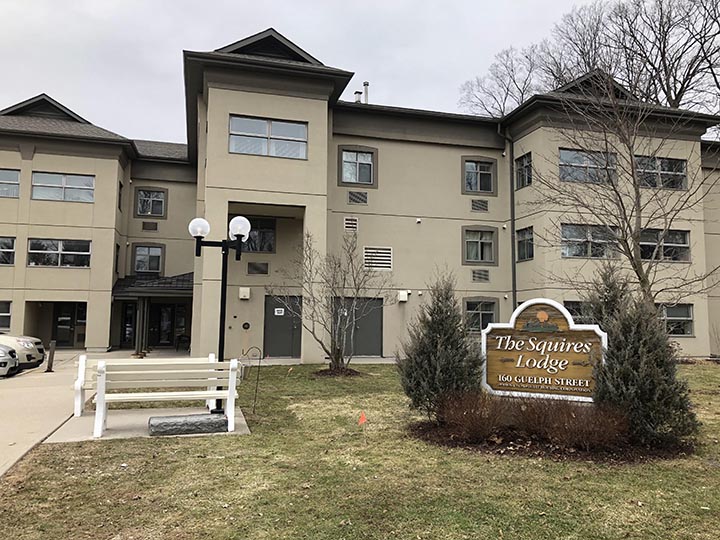 Proposed expansion - Eramosa Non-Profit Housing Corporation is seeking Guelph-Eramosa council’s support in its bid to almost double the number of units at The Squires Lodge on Guelph Street in Rockwood. Photo by Mike Robinson

BRUCEDALE – Non-profit housing capacity could roughly double in Rockwood  as the result of a proposal by Eramosa Non-Profit Housing Corporation.

On March 9, Michele Dawe and Tim Welch, from Eramosa Non-Profit Housing came to council seeking to add a second 24-unit building to the Squires Lodge site on Guelph Street in Rockwood.

“Our non-profit now has an excellent opportunity to double the amount of housing we provide for seniors through the creation of a 24-unit addition on our existing land.”

Wellington County recently stated it would accept request for proposals seeking capital funding to create new affordable housing within the county and Guelph.

To make the project financially viable, Dawe said Eramosa Non-Profit is asking Guelph-Eramosa Council to defer the project’s development charges for a full 20 years without payment or interest, as permitted by the provincial legislation known as Bill 108.

Dawe said the 20 year deferral would be seen by Wellington County and Canada Mortgage and Housing Corporation (CMHC) as very strong township support for this new housing when they are reviewing and evaluating the response to the RFP.

In 2019, Eramosa Non-Profit Housing was able to pay off its mortgage/loan on Squires Lodge, she said.

“It’s pretty exciting … we all worked very hard to make that happen.”

Dawe said that accomplishment is allowing the group to begin efforts to construct an additional 24-unit building on the front of the property.

“We already own the land, and we’d like to proceed with a new, connected building.”

Dawe said an additional building would allow a reduction of the wait list, which current sits at 60-plus.

The current building provides one and two bedroom homes including those paying market value and other paying rent according to income.

Built in the early 1980s, the 26-unit building  includes 16 market geared rentals while the remainder pay rent geared to income.

Dawe said “It is not a rest home or a nursing home, this is for independent seniors.”

“We believe we can build 24 more units which will include a combination of one bedroom, two bedroom and wheelchair accessible units,” Dawe said.

Overall, Welch said, the Squires project has a $6 million estimated cost and that the development charges represent roughly eight per cent of that overall cost.

Deferral of development charges allows the mortgage to be paid down more quickly, he said.

“We like to think of this as part of the community infrastructure. This would allow us to essentially double the size of that resource in your community.”

Dawe said “we have people from all over the township who come to Squires.”

White said “I see this as a hub for the seniors in this community. We don’t have a lot of services because we are a small township.” He added “I think this is a fantastic project.”

White added when you look at the bang for the buck, getting 24 units for $6 million is very cost effective to help keep seniors in the community.

“This will allow their grandparents to stay in the community instead of moving to Guelph or Kitchener. I appreciate you folks stepping forward,” he said.

White agreed there are a number of hurdles to overcome, but the township would provide as much support as possible.

Councillor Bruce Dickieson said he assumed the math worked out for the $6 million with $1.6 million from the county and some from the township.

Welch noted CMCH does offer some low interest loans, “but we would definitely need a low interest mortgage to complete this project.”

White clarified the $1.6 million being offered through Wellington County is for projects through the county and the City of Guelph over the next two years – this is not just for a single project.

He added the applications are a competitive process, with applications from communities throughout Wellington.

White explained various organizations will be seeking portions of these funds. He said he understood the Guelph-Eramosa group was seeking about $1 million of this fund.

“We can’t presuppose what will happen in this process or how it will turn out.”

White said county officials he has spoken with, “see there is a lot of demand.” White added, “Without this type of partnership, the county would have to build the whole thing.”

Dawe said one thing in the group’s favour is that it already owns the land for the building.

Dickieson asked, “how much more will be needed down the road to make this project a go.”

Dawe responded, “This is going to go. We have a 26-unit building with no mortgage.”

“With support from you and support from the community, the county, and the province … it’s going to be built … come hell or high water.”

White stated from a local perspective, the township would defer the development charges for 20 years.

He added there are other items the group may seek later.

Council  will deal with those items as they come up – including site plan costs, easements, building permits and various things to move the project along.

Welch considered deferral of the development charges the largest piece by far.

White said this is not about the township handing over $500,000, “this is about what we can do for you with regard to our internal processes.”

Councillor Mark Bouwmeester said “We can’t solve the national housing shortage, but we can choose to be a small part of the solution (locally).

As to whether is is a lower-tier municipal responsibility to jump into the housing issue, he said “the township has stepped up when it had an opportunity to help.”