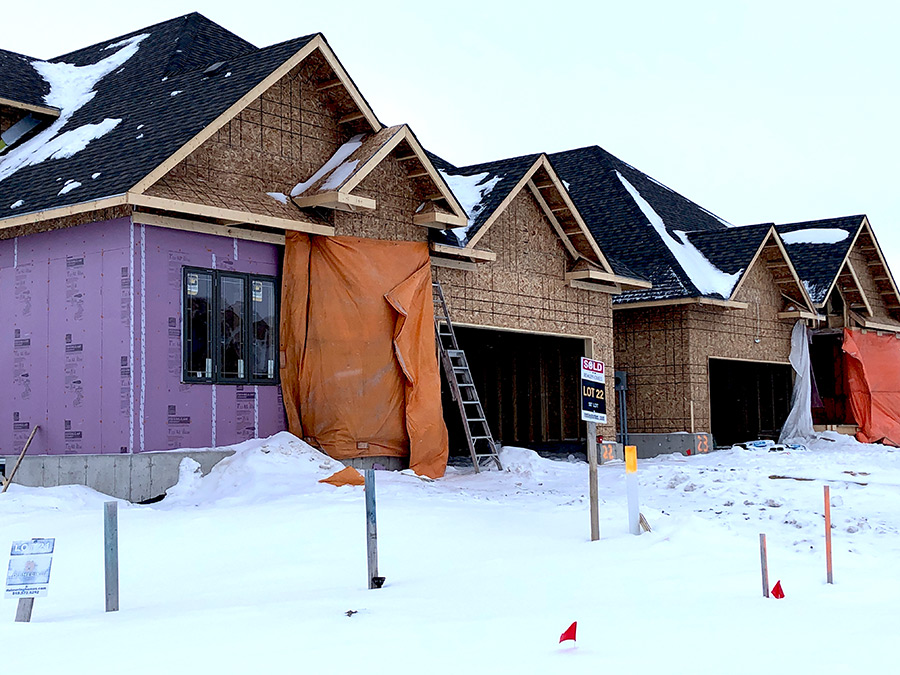 uilding green - Green building standards are expected to be a part of the County of Wellington Climate Change Mitigation Plan. Photo by Patrick Raftis

She presented Mapleton council with a preview of the County of Wellington’s Climate Change Mitigation Plan on Jan. 26.

Chisholme explained the plan, developed over the last 18 months, outlines how member municipalities can work together to reduce greenhouse gas emissions.

In developing the plan, the county followed the Federation of Canadian Municipalities’ Five Milestone Framework and has received funding to complete the first three milestones:

– creating an emissions inventory and forecast;

– development of a local action plan.

Implementation and monitoring are the fourth and fifth milestones in the framework.

Targets for the plan were modelled after agreements and commitments made by other levels of government, including the federal commitment to achieve net-zero emissions by 2050 or the Paris Accord, which calls for a 30 per cent reduction from 2005 emission levels by 2030.

The organization Partners in Climate Protection advocates for communities to adopt a 6% drop from a designated baseline year over a 10-year period. The county has chosen 2017 as its base year for reduction planning.

The plan outlines how reductions can be implemented through tools like active transportation plans, development policies such as green building guidelines and community incentive programs, which will be elements of the county plan, she noted.

Councillor Paul Douglas asked if the next steps will be for each individual municipality to develop a plan or if something would be implemented county wide.

Chisholme explained the county would take the lead, but individual municipalities could develop local adaptations.

“In the plan I’ve included a recommendation to do a five-year work plan to sort of lay out how the recommendations of the plan will roll out. There are some things we can get started on right away (and) other things that will take some time to get up and rolling,” she said.

Financial considerations will play a role in the implementation plan, Chisholme explained.

The plan calls for action to begin in 2022, she noted, “So this year will hopefully work on some of those budget issues, get them into next year’s budget and then we’ll hopefully be off and running.”

“How do you suppose we go about that without driving development somewhere else?” the mayor wondered.

Chisholme noted  similar concerns were raised when local industry leaders were gathered to provide input on the plan.

“That’s been raised as a concern for economic development as well, particularly where it comes to affordable housing,” she noted.

“What those leaders are seeing is, where green building guidelines are in place, the building community has supported those municipalities and it’s bled over to neighbouring municipalities in that the development industry … is wanting to do some of these things.”

She added, “So it’s something we really need to be cognizant of in the way we approach the development of the guidelines.”

“In many places these guidelines are voluntary and with the adoption of those guidelines by the construction industry we would see an incentive of some sort,” she explained.

Davidson asked if the county was lobbying provincial officials to incorporate green standards into the building code.

Chisholme noted the latest update to the building code includes a 15 per cent improvement in energy efficiency requirements over the previous standard.

“My understanding from our local industry leaders is the building code will eventually come to a net zero, even by 2030, so developing these green guidelines will really help us transition,” she pointed out.

Mapleton chief building official Patty Wright said, “We’re working toward net zero by 2030. We have, definitely, builders who are choosing to go well above the current standards now.”

Chisholme replied, “So the industry is responding and they’re using that as a selling point of the houses – that they’re more efficient, therefor they’re cheaper to service.”

However, noted Davidson, while homes built to the higher standard do “generate quite a bit of savings,” they are “more expensive to put together.”

“Is there anything individuals can do on our own, or with another group … to help the situation?” asked councillor Dennis Craven.

Chisholme responded that simply “being aware of energy use” is very important.

“One thing we need to be looking at is deep energy retrofits in our existing houses,” she noted.

“Many of our houses were not constructed with the current building code, so we want to bring them up to the current code,” she said, adding such conversions would “drive down energy costs.

The climate change mitigation plan is currently being reviewed by county staff and is expected to go to the planning committee in early February.

It will be presented to Wellington County council later that month.