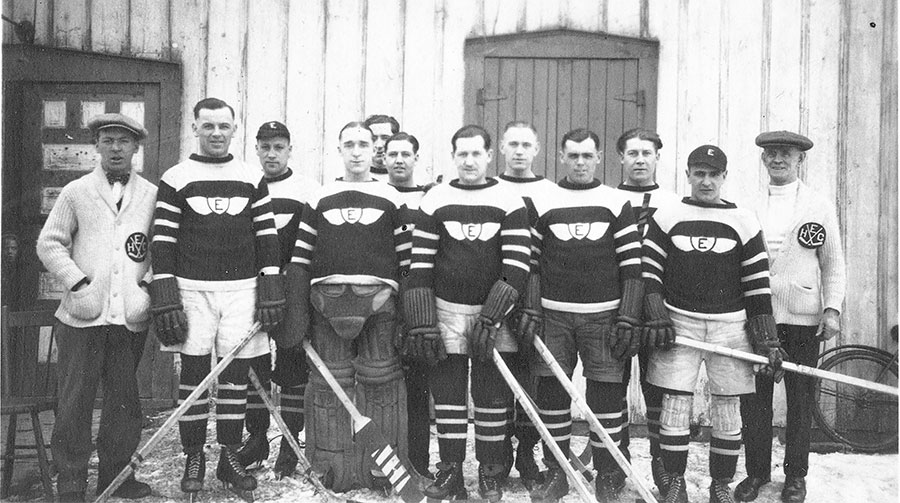 Elora’s various hockey teams, which are currently gearing up for a new season (1991), are playing in a facility that would have been considered luxurious by the village’s early teams.

The current modern arena dates to 1977, and is the fourth rink to serve the village.

Winter sports in Elora were not as popular in the 19th century as they have become in recent decades. Only curling persisted in Elora with few interruptions. There appears to have been no organized hockey until the 1900 era. Ice skating, particularly as a family past time, goes back to the 1870s.

All winter activities were initially outdoors. Curlers began using the Grand River, behind the buildings on Mill street in the late 1840s, as did the first skaters.

It was a rather attractive location: spectators could gather on the balconies of the buildings and along the Victoria-street bridge to watch, and the popular barroom of the Commercial Hotel (the building in front of the Gorge Cinema) was only steps away when the players needed to warm themselves. Sometimes large lanterns were hung from the bridge for evening play and skating.

Attractive as it was, the river was less than ideal for sporting purposes. There were always dangers from thin ice, and snow had to be shovelled before any other activity took place. During the summer of 1879 a group of Elora’s merchants got together to build a proper facility.

The result was the Elora Rink Co., later known as the Elora Curling and Skating Rink Co., led by businessman John Bain and Frank Dalby, of the Dalby House, along with a group of storekeepers. Most of these men were active curlers. Though organized as a business, the leaders of the group knew there was little chance of a profit from their venture. They estimated the cost of a site and building at $1,500, and issued 60 shares of $25 each to finance the project.

In August of 1879, the Rink Co, purchased two lots on the north side of Mill street, and made plans for a building about 75 by 150 feet in size. (This property is now occupied by the strip mall at the foot of Geddes St.) The group had to scale down its plans somewhat when it could sell only 46 of the shares.

The contractor, Stephens and Co. of Guelph, carried out the construction in the fall of 1879, and the building was opened for skating a few days before Christmas. The land had cost $260 and the building and incidentals over $1,000. The Elora Rink Co. was already in debt, and the situation never improved.

No picture of the first rink seems to have survived, except for a couple of views which show part of the roof. The main building, over the ice surface, measured 156 by 70 feet, with a lean-to along each side for spectators. A single sheet of ice served both skaters and curlers. Even if there were windows in the building, the interior must have been very dark. We know nothing about the illumination, either natural or artificial.

Most skaters purchased a season’s pass, which was sold at $2 for men, $1.50 for women, and $1 for children. A family pass was available for $4, and a single admission was ten cents. These were sizable amounts for the time: most employees earned between $7 and $10 per week at the time.

To make the facility more attractive, the company took out a mortgage to provide amenities such as change rooms and a well. They found one good bargain: the Methodist church (now the United church) had been suffering from decreasing attendance, and sold the side galleries from the church to the rink for spectator’s seats.

Operating deficits increased annually, and attendance declined as the novelty of indoor skating wore off. After the 1883-84 season the company defaulted on its mortgage. The property went on the auction block on June 2, 1884, and was picked up by the mortgage holder, Elora banker Thomas Gale, for $510.

Gale made some improvements to the rink, including stoves in the dressing rooms. At times, the building was also used as a warehouse by Carter Brothers, the grain dealers, and by the Elora Carpet Factory.

Skating and curling continued through the 1880s and 1890s, but there is no record of hockey being played in the rink in these years.

No one made money on the rink. It was sold again at auction in 1897, and it changed hands again several times after this date. By 1900, interest in hockey was rising in the village, and games were played on an informal basis.

This brought additional business to the rink, especially in 1904, when a local league was formed. Four teams, sponsored by Mundells, the Royal Hotel, the Iroquois Hotel (a new name for the Dalby House) and the high school, played for the local mantle.

In January of 1908, the rink burned to the ground. Elora had to wait 12 years for another indoor rink. In the meantime, J.C. Mundell provided the village with an open-air rink at the northwest corner of Geddes and David streets. The lawn bowling club used this land in the summers.

There were efforts beginning in 1911 to build a new arena. An out-of-town investor, G.E. Robinson, made plans to build a rink on the south side of James Street (immediately behind the Elora Legion).

The committee running the outdoor arena started a building fund in 1915. Leading lights in this effort were F.J. Ross, manager of the Merchants bank, J.F. Cameron, manager of the Elora Quarry, Dr. Kerr, J.C. Mundell, and J.A. Cole. This group formed a private company in 1919, with a capital of $5,000, divided into shares of $10 each. It was known as the Elora Recreation Co. Ltd.

The new company purchased a piece of land running between Chalmers and North Queen streets, across the street from the Elora public school (now the Elora Centre for the Arts). A suitable second-hand building was found in Preston; it was dismantled, moved to Elora, and reassembled. The partially-erected building blew down in a storm late in 1919, delaying the opening until the last week of January 1920.

The new rink had an ice surface of 166 by 66 feet. It was a barn-like, metal-clad structure, rather unattractive in appearance.

Organized hockey soon became established in the new rink. During the 1920s, Elora’s intermediate team enjoyed success and fan support, particularly in games with their bitter rivals from Fergus.

The Elora Recreation Co. operated the rink with mixed success through the 1920s, breaking even most years. Deficits were made up with donations from Elora’s businessmen, rather than grants from the village council.

(Next week: The rink goes up in flames and a new arena gets built quickly in the middle of the depression.)

*This column was originally published in the Elora Sentinel on Oct. 22, 1991.