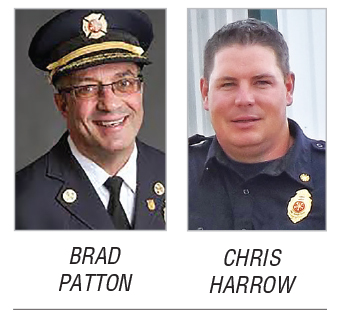 The practice, referred to as double hatting, has been a contentious issue for decades between the International Association of Firefighters (IAFF) labour union and firefighters, fire chiefs and local and provincial politicians.

Wellington County fire departments are comprised of volunteer firefighters, but they are impacted by the issue because some of those volunteers also work as professional firefighters in larger neighbouring  municipalities.

The Town of Minto, the municipality with the largest fire department in the county, has two double hatters out of 80 firefighters.

The Mapleton department has one double hatter out of 44, while Wellington North has four double hatters out of a total 48 firefighters.

Guelph-Eramosa, which only has one fire station and 40 firefighters, has six double hatters.

And despite the recent passage of Bill 57, the stigma surrounding double hatters remains a concern for some fire chiefs.

Erin Fire Chief Jim Sawkins preferred not to disclose the number of double hatters on his roster of 40, and Puslinch Fire Chief Louis Gomes declined to answer any questions regarding the new legislation.

Yet proponents of Bill 57 say it will reduce the stigma by prohibiting unions from “suspending, expelling, fining or attempting to collect a fine from, penalizing or otherwise disciplining a firefighter because the firefighter has worked, is working or intends to work as a volunteer firefighter.”

It also reduces from three to one the number of arbitrators needed for dispute resolutions and adds a requirement “that an arbitrator provide written reasons for a decision at the request of either party.”

Wellington County fire chiefs are pleased with the passage of the new legislation.

“To deplete those fire halls of full-time firefighting staff would I think would be a tremendous loss,” Petrik said.

“The knowledge that these people have when they come from a full-time position is just helpful for everyone involved,” said Richardson.

Wellington North Fire Chief Dave Guilbault has been involved since 2002 with campaigns to amend previous legislation (the Fire Protection and Prevention Act, 1997) that had prohibited double hatting.

“This has been a long time coming,” said Guilbault.

While volunteer firefighters are paid for their time and service, they make less than their professional counterparts, which makes staffing fire departments more affordable for lower tier municipalities.

“My budget right now for volunteer firefighters … counting everything, is just under $800,000,” Guilbault explained. “If I was to go to career firefighters, my budget would be $5 million and we don’t have a tax base in Wellington North to support that, we just don’t.”

The Wellington North department has in the past lost two double hatters over the issue – and Guilbault hopes to see them both return.

Minto Fire Chief Chris Harrow said, “[Bill 57] will definitely help with retention, to retain a bunch of the firefighters that departments have.”

He added the Minto department has not traditionally faced issues resulting from double hatters because of the municipality’s distance from cities.

“I think the bigger thing for our younger firefighters is if they get jobs in the city as full-time firefighters, then it would easy for us to keep them because they would be much more willing to stay,” Harrow said.

Having part-time jobs is a common reality for professional firefighters, fire chiefs say. Some full-timers work a total of seven days a month on 24-hour shifts.

Sawkins said it didn’t make sense that firefighters were prevented from volunteering in their time off to supplement their income.

“Personally I could never understand it, given the fact that when I was a younger firefighter I had a second job myself, whether it be carpentry or driving a truck,” said Sawkins.

“They weren’t dictating that. It was specifically serving as a volunteer firefighter.”

Patton said while it’s important for firefighters to have the freedom to volunteer with local departments, he doesn’t think the issue has been fully resolved just yet, despite Bill 57’s royal accent.

“The unions are certainly reviewing their legal options. There is still a lot of ground to cover before we can really put this to rest,” said Patton.

IAFF Ontario District Vice President Fred LeBlanc said the labour union was not given the time or chance to voice its concerns prior to Bill 57’s passage.

“We had no meaningful consultation at all with the government and that was very disappointing,” LeBlanc said.

That was not the case when the amendments were discussed by previous PC governments under leaders Mike Harris and Ernie Eves, he added.

However, LeBlanc said the IAFF’s main concern now is on educating firefighters about possible health risks.  He added the IAFF did not have any members charged for double hatting from rural areas like Wellington County.

“It’s never been really our focus. It becomes more personal in safety issue versus a constitutional issue from our perspective,” said LeBlanc.

According to LeBlanc, heart attacks, PTSD and 14 types of cancers are all recognized as job-related risks for firefighters.

Working for two fire departments can double firefighters’ exposure to carcinogens and the physical exertions that cause health risks, he said.

Legislation that interferes with an organization’s right to set consequences for the members it protects and is responsible for goes too far, LeBlanc opined.

“Nowhere in Canada has any other government stepped in and interfered to that level,” he said.

Perth-Wellington MPP, Randy Pettapiece said Bill 57 is just one example of how the PC government is trying to meet the demands of its constituents.

“Previous governments have fooled around with this for too long and now there is some clarity in it and it’s done – and certainly I am glad that it’s passed,” he added.

He has been working through the Association of Municipalities of Ontario “for a number of years with the previous government, pushing them to allow Centre Wellington to use full-time firefighters as volunteer firefighters.”

Though he said he cannot speak on behalf of other Wellington mayors, he commented that he “can imagine any small- or medium-sized town mayors would be very happy with this decision.”