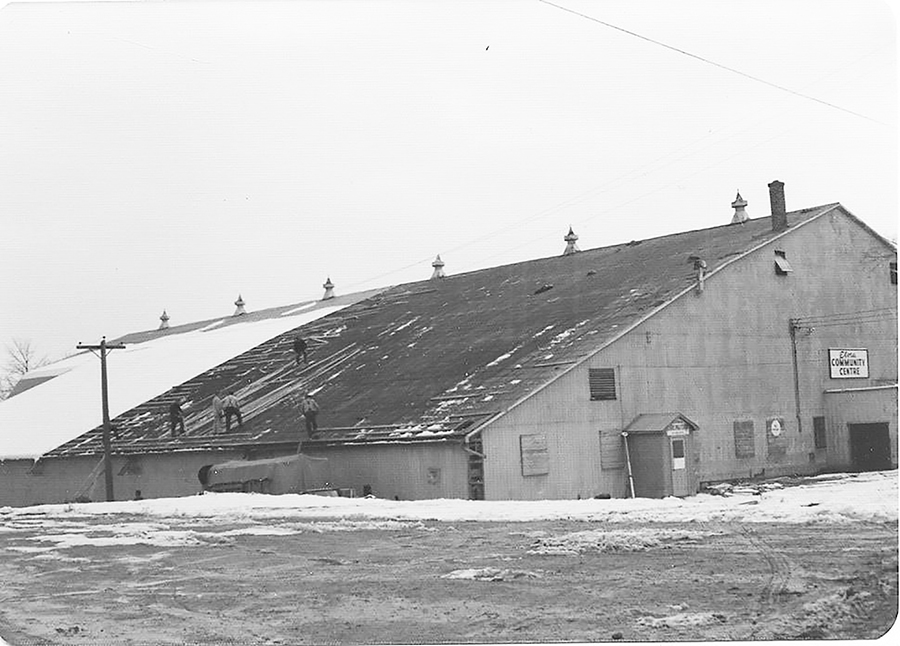 Arena work – The Elora Arena was demolished in 1970 after failing to pass safety standards. The Elora Community Centre was built in the same location following the demolition. Wellington County Museum & Archives, ph36426

The following is a re-print of a past column by former Advertiser columnist Stephen Thorning, who passed away on Feb. 23, 2015.
Some text has been updated to reflect changes since the original publication and any images used may not be the same as those that accompanied the original publication.
(Note: This is the conclusion of an article on Elora’s rinks that served the village before the present community centre was constructed.)

The Elora Recreation Co., owners of Elora’s arena on Chalmers Street, began to run into financial trouble in the 1930s, the result of declining revenues as the depression dragged on.

Early in 1933, the president of the company, Russell Duncan, announced that the Chalmers Street rink might be forced to close because of a $125 deficit. It seems a pitifully small sum now, but at the time, when wages were in the range of 35 cents an hour for those lucky enough to have a job, it seemed a fortune.

The rink, in fact, did close. The cause, though, was not the financial condition of the company. On June 6 of 1933, the building was destroyed by fire. The building had stood in Elora for only 14 years, but it was much older, having been moved from Preston in 1919, and was constructed of wood.

The heat was so intense that the fire brigade confined its efforts to saving the three houses to the north of the rink, and the T.E. Bissell office to the south. All these structures suffered roof damage and broken windows from the heat. Trees along the street were destroyed. Burning embers landed as far away as Salem.

Despite the depression, plans were soon under way for a new rink. The fire, in fact, seemed to rally the village. Everyone realized that the Chalmers Street site was far too small, and provided virtually no room for parking.

As well, flooding the rink each year at the Chalmers Street site had presented problems. There was no municipal water supply in Elora at the time. The fire department had to be called in each year to pump water from the river.

The search began for another location. The Chalmers Street land was purchased by Carman and Jean Waind, who built the attractive stone residence which still stands at the location.

The first potential site to be considered was part of what is now Hoffer Park. The front of the new arena would have faced James Street.

This first site had to be abandoned due to engineering and legal obstacles. Next to be considered was part of Irvine Park.

Elora council by this time had become involved in the new arena project. The village leased the portion of the park at the west end of the David Street bridge to the Elora Recreation Co. The village also undertook $2,000 worth of work on the site as a relief project, and issued $4,500 in debentures to assist with the work.

Tenders were called for construction at the beginning of October, only four months after the fire. There were fears that the cost might be as high as $30,000, but the low tender came in at $10,300, from Hipel and Co., of Preston.

Construction proceeded very quickly in the last two months of 1933. The new arena measured 206 feet by 90 feet, with an ice surface 175 feet by 75 feet, seating for 1,000 people, and standing room for a couple of hundred more.

The building itself was clad in steel, and the roof was supported on laminated wooden trusses. The Elora curling club had its own separate ice surface, in a wing 30 by 175 feet at the east side of the arena.

The official opening of the new arena on Jan. 24, 1934, enlivened Elora during the gloom of the depression years. Though no one proclaimed the new arena as an architectural masterpiece, the project was a remarkable achievement for the village at this time of global economic depression. Through the combined efforts of individuals, the Elora Recreation Co., and the village council, the new building had been planned and constructed in less than eight months.

Bert Prine led the festivities for the opening of the arena, and two special guests were present: Lou Marsh of the Toronto Star, one of Canada’s leading sports writers, and Foster Hewitt, representing the Ontario Hockey Association. The festivities concluded, appropriately, with a hockey game, between Elora and Georgetown.

The Elora Rocks Intermediate ‘B’ team of the late 1930s enjoyed considerable success. Crowds often packed the new arena to the rafters to cheer the team on. The ice surface also served for public skating, and in summer, the building provided a home base for Elora’s lacrosse teams.

The Elora Recreation Co. still managed the arena, but the shareholders had exhausted themselves in the rebuilding efforts. The financial position of the arena remained unhealthy, and a large debt stood on the books.

Many people had promised to buy additional shares in the company, but they were unable to come up with the money. A takeover by the village was inevitable.

Many memorable teams took to the ice in the arena during the 1940s and 1950s. The major problem with the arena became the weather — mild spells and early thaws played havoc with the schedule in some years. Artificial ice was becoming a necessity, but the village shuddered at the cost estimates of such a project.

Under the leadership of George Hughes, the manager of the Bank of Montreal, the village united in a fundraising effort to install a refrigeration plant. The cost of this project exceeded $45,000, and involved sustained fundraising efforts by many of Elora’s service clubs and societies during 1960 and 1961.

Following a rash of collapsed arena roofs across Ontario, the provincial government brought in tighter standards of construction for hockey rinks. The Elora arena was among many that failed to pass the new tests.

A crew of Mennonite farmers demolished the building in 1970.

Elora, along with Nichol and Pilkington townships, co-operated on the construction of a new Elora Arena. The Elora Curling Club purchased the refrigeration equipment and floor of the old arena, and constructed a new curling club building on the site of Elora’s old arena.

*This column was originally published in the Elora Sentinel on Oct. 29, 1991.