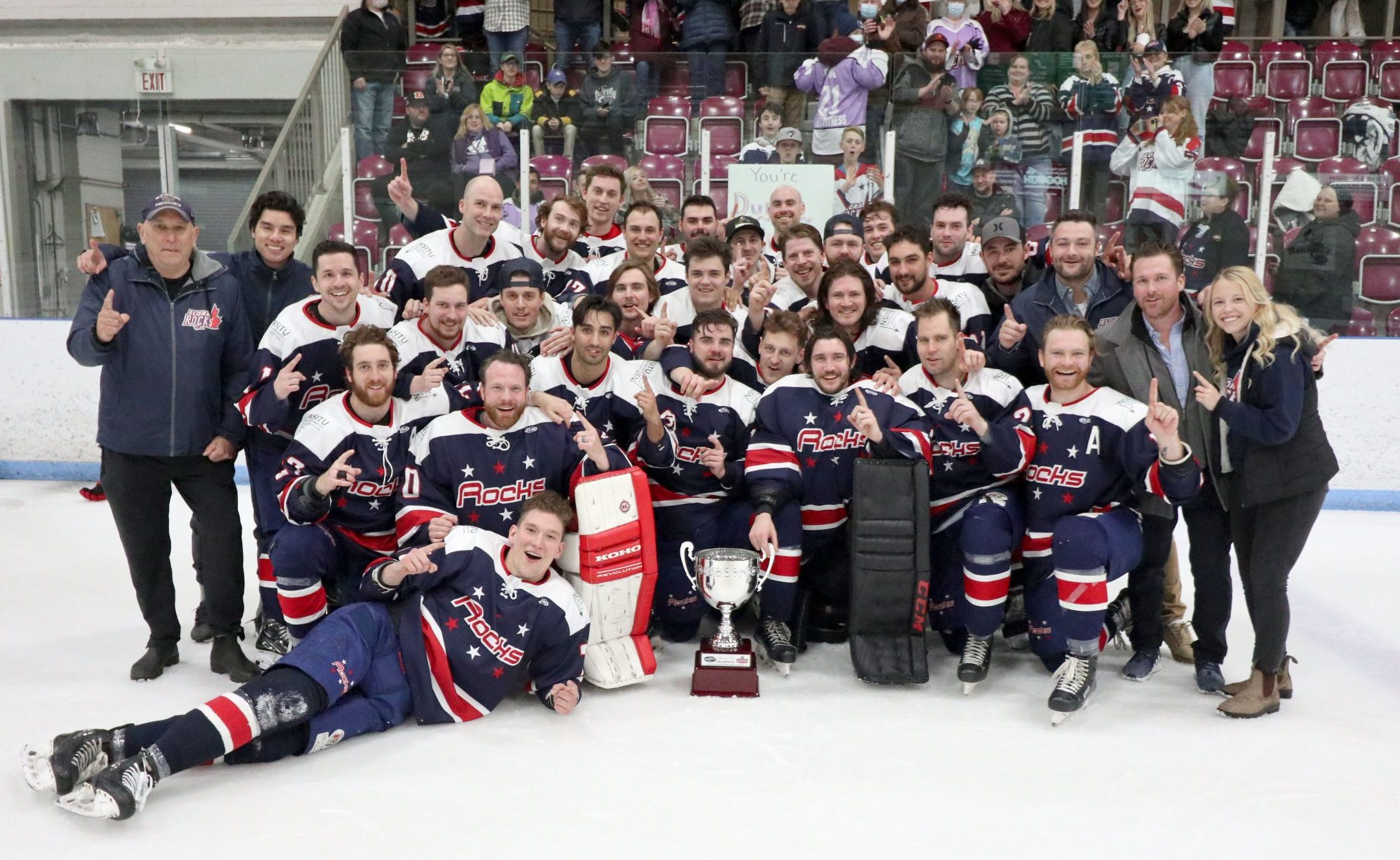 The Elora Rocks won the championship in the inaugural season for the Western Ontario Super Hockey League on April 23, defeating the Tillsonburg Thunder in the final series. Submitted photo

ELORA – The Elora Rocks have won the championship in the inaugural season of the Western Ontario Super Hockey League (WOSHL).

The newly revived team won the best-of-seven final series 4-2 against the Tillsonburg Thunder, wrapping up Game 6 on Saturday with a 3-2 win on the road.

However, Rocks president Rich Wigmore said it was the previous game last Friday night that was the determining factor in the team’s victory.

In Friday’s game, the team was down 2-0 with six minutes left before scoring three goals and winning the game 3-2.

“[Tillsonburg] knew at that point that no lead was safe,” Wigmore said. “And that the chances of them being able to hold a lead against us was going to be really, really tough.”

After securing the win in Game 5, the team was deadlocked on Saturday 2-2, but Wigmore said the team was composed and confident, knowing they could secure the win.

It was the team’s playoff MVP, Charlie Stephens, who scored the winning goal during a power play with seven minutes left.

“There’s nothing bittersweet about it, that’s for sure,” Wigmore said of the championship win. “It’s just sweet, it’s the coolest feeling.”

Wigmore said not only is he proud of the players, but also the organization and the community, noting the team had roughly 150 fans in attendance at the away game on Saturday.

“It’s an hour and a half away and they show up, they pay the gate fee, they help contribute to the fan base,” he explained.

“We really wanted to win at home, but we didn’t,” he said. “But we really felt like even though we were the away team, we felt like the home team because our fans are so loud and proud.”

Wigmore also gave credit to the team’s general manager Mitch Scott, who had to step in as head coach – a role he had never filled before – abruptly mid-season.

“For someone that hasn’t coached at this calibre before, he did a really, really good job,” Wigmore said. “And he definitely deserves some recognition for that.”

Wigmore also highlighted the team’s backup goalie, Craig Byford, who only played one game this season but was a big part of the team’s success through his support.

With the first season now under its belt, Wigmore said the WOSHL is growing next year, with two new teams already confirmed.

“Just to see the growth and where it’s going to go, being the inaugural champion is really special,” he said.

“But seeing where this league is going to go, the fans are definitely in for a treat.

“And the forward thinking and progressiveness of the league is really, really exciting,” he added.

“And it’s going to be even bigger next year, so we’re really looking forward to that.” 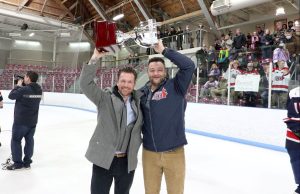 Wigmore noted so far there’s no signs of retirement and the same Rocks roster will be returning for next season.

“They said the toughest thing about winning is that it’s done,” he said.

“That’s how much they love our team and that gave me chills. Win or lose, we just want the fans and everyone to have a good time.”

Wigmore said although Tillsonburg is a phenomenal team with a lot of talent, what it came down to was the players’ bond with one another.

“What it came down to was our team is better family,” he said.

As for the season overall, Wigmore said team officials achieved what they set out to do.

“We said from the start of the season we wanted to bring this back to what else was once in the past,” he said. “I think that we’re on the right track.”

He noted team members and officials also wanted to win the regular reason, before setting out to win the championship – both of which they achieved.

“I think we’re going to have an overwhelming amount of support again, just based on every game,” Wigmore said.

Although they met their goals, Wigmore said the biggest takeaway from the season is the fan base and support the team built up throughout the season.

“By the end of the season when we have as many fans as we do and all the messages and all the photos and tears and all these things,” he said.

“I think the biggest takeaway is that we built something incredible and we became a family this season.”