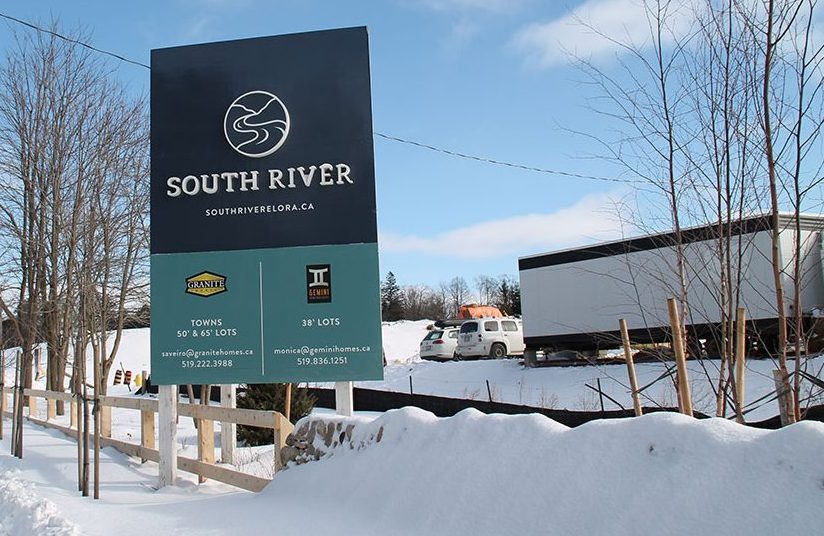 Gemini Homes Inc. has voided the contracts of 32 purchasers of homes in the South River development in Elora. Fourteen have commenced legal action. Advertiser file photo

ELORA – Gemini Homes Inc. has voided the contracts of 32 purchasers of homes in the South River development in Elora, leaving many scrambling for accommodation and almost all wondering how they will ever get into the housing market now.

Purchasers received a blast email around 5pm on Jan. 18 from the builder telling them their contracts are void because the hard services in the subdivision were not installed and approved by Centre Wellington Township by a Jan. 13 deadline.

“It’s more than disappointing,” said Michael Renaud, who with his wife purchased a home in the subdivision last February.

Brad Dudeck and his partner Victoria Nagy have a similar story. They purchased their home in the subdivision last January and paid their $70,000 down payment in the agreed upon instalment dates.

They also met deadlines to make structural changes to their house plan, such as coffered ceilings, by the required dates.

Dudeck said there was no communication from Gemini over the year of any delays or issues with the project, “until Tuesday, when we learned our contracts are void.

He added he’s been in touch with a lawyer and the affected purchasers have formed a Facebook group to share information.

“We’re getting more organized,” he said. “It seems everyone in the neighbourhood has had their contract terminated.” 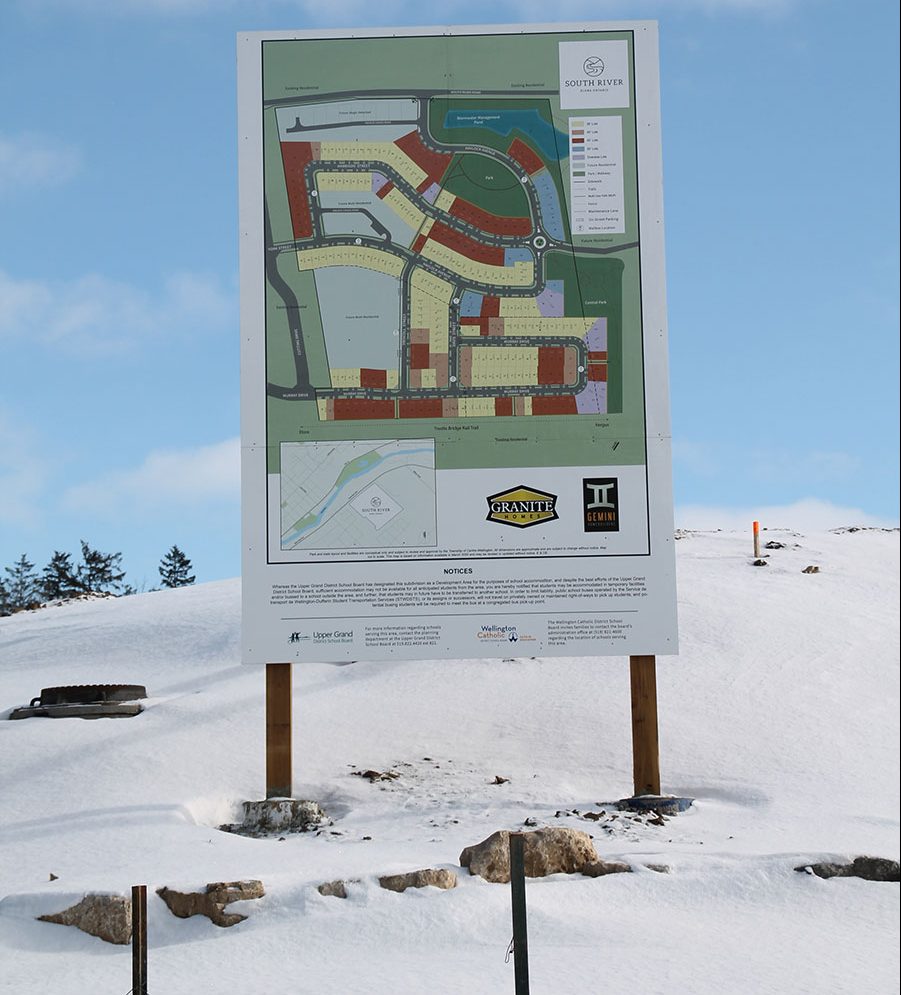 Dudeck said he started saving for a house when he was 20 and when he and Nagy became a couple, they pooled their resources and started looking.

The real estate market was volatile last year, with bidding wars on resales driving prices up and the pandemic putting rural communities like Elora in high demand for folks wanting to move out of congested cities.

But homes for sale in Elora are few and far between.

Dudeck said he fell in love with the village the first time he visited, so when they learned of the South River subdivision, they jumped at the chance to own a home in Elora.

And once they had signed on the dotted line, they took comfort in knowing they were locked in at a price they could afford while the real estate market skyrocketed around them.

Now the home they bought for $800,000 is listed at $1.2 million on the Gemini Homebuilders website.

“I might not be able to afford a house anymore,” Dudeck said.

In a statement, Gemini Homebuilders general manager Brad Crnkovic states that there was a condition in the purchase agreements that the hard services – gas, hydro, water, sewage – had to be installed and pass inspection by Jan. 13.

When that condition was not met, the contracts were automatically terminated.

“The completion date and scope for hard services as referenced in the Agreement of Purchase and Sale were established by Gemini Homes and not the township or the developer,” his statement reads.

“When the completion date for hard services was not met, the Agreements of Purchase and Sale were automatically terminated. 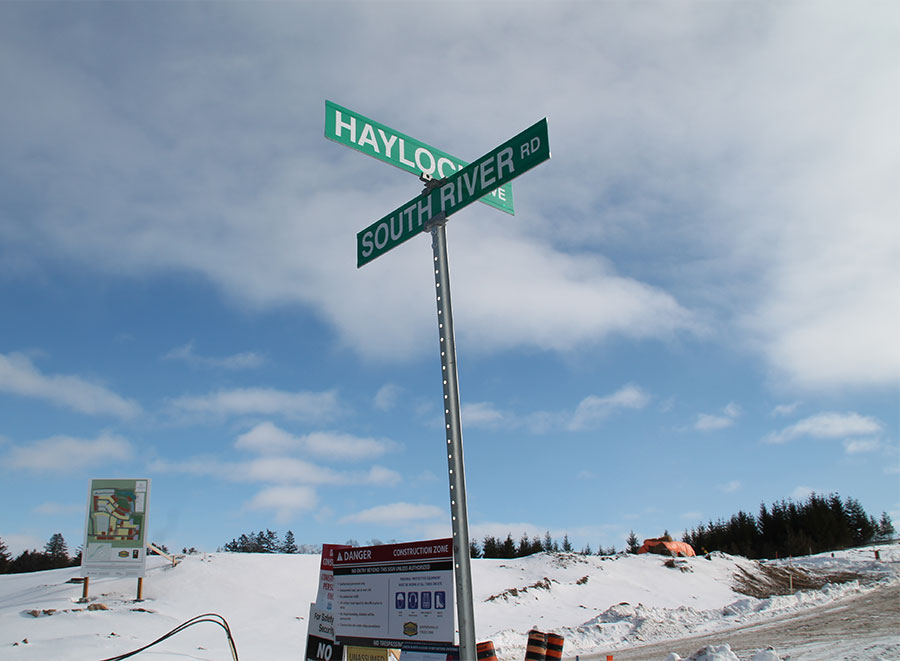 Gemini Homes Inc. has voided the contracts of 32 purchasers of homes in the South River development in Elora.

“The servicing of the development has been impacted by these delays and it is difficult to know what further impacts the development will experience as a result of these supply chain and labour issues,” he states.

“As a result of the Agreements of Purchase and Sale being automatically terminated, Gemini is obligated to return the deposits paid by purchasers and is making arrangements for the repayment of deposits as soon as possible.

“Gemini will also be open to having discussions with the purchasers in an attempt to find a mutually acceptable solution for all parties in the circumstances.”

Wording in a previous statement by Gemini suggested Centre Wellington Township was at fault.

Mayor Kelly Linton said in an interview that township staff met with Gemini Homes on Jan. 20 and Gemini has since clarified its wording.

Linton said Jan. 13 was not a date set by the township and Gemini acknowledged it was Gemini that set the date.

“This is a date they were targeting for roads, water, electrical and so forth. They have not installed the hard services to our requirements. We can only issue building permits once the hard services are in place,” Linton said.

He added that beyond ensuring zoning bylaws and building codes are met, the township doesn’t have any authority or part to play in what happens to the cancelled buyers.

“I feel badly for the home buyers,” Linton said. “They thought they had agreements in place and now they have to start over.”

Some purchasers were afraid to speak on the record because they still want to live in the subdivision and don’t want to jeopardize any compromise the builder might propose.

But they said it feels like it’s really about the money and Gemini wanting to cash in on a hot housing market.

The Advertiser put the question to Crnkovic but he did not immediately reply.