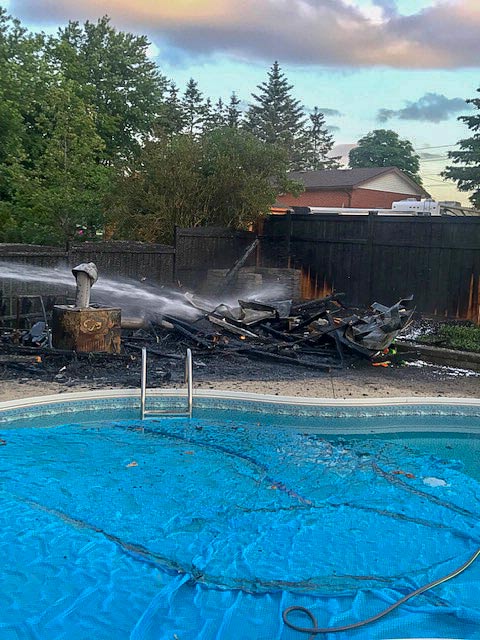 Destroyed - The pool shed at a house on Omar Street in Fergus was destroyed in a morning fire on June 26. Submitted photo

At 5:45am on June 26, Fergus and Elora firefighters were called to the shed fire on Omar Street.

A neighbour saw the blaze and called 911 before waking up the homeowner.

“He’s certainly lucky that his neighbour saw it when he did so we could stop it from spreading more than it did,” said Jonathan Karn, deputy fire chief with Centre Wellington Fire Rescue Services.

When firefighters arrived on scene the wood pool shed, located at the back corner of the yard, was engulfed in flames and two parts of a nearby wood fence were also on fire.

Nineteen firefighters attended the call, extinguishing the fire within an hour.

The fire completely destroyed the pool shed, which housed the pool filter and pool heater, among other things. It also damaged the pool cover and pool liner and the radiant heat melted some of the siding on the house.

“It was a lot of heat coming off it,” Karn said. “So that’s what would have melted that siding on the house a little bit, even though it was a little ways from [the fire].

There were no injuries and the cause of the fire is undetermined, but Karn said it is not considered suspicious.