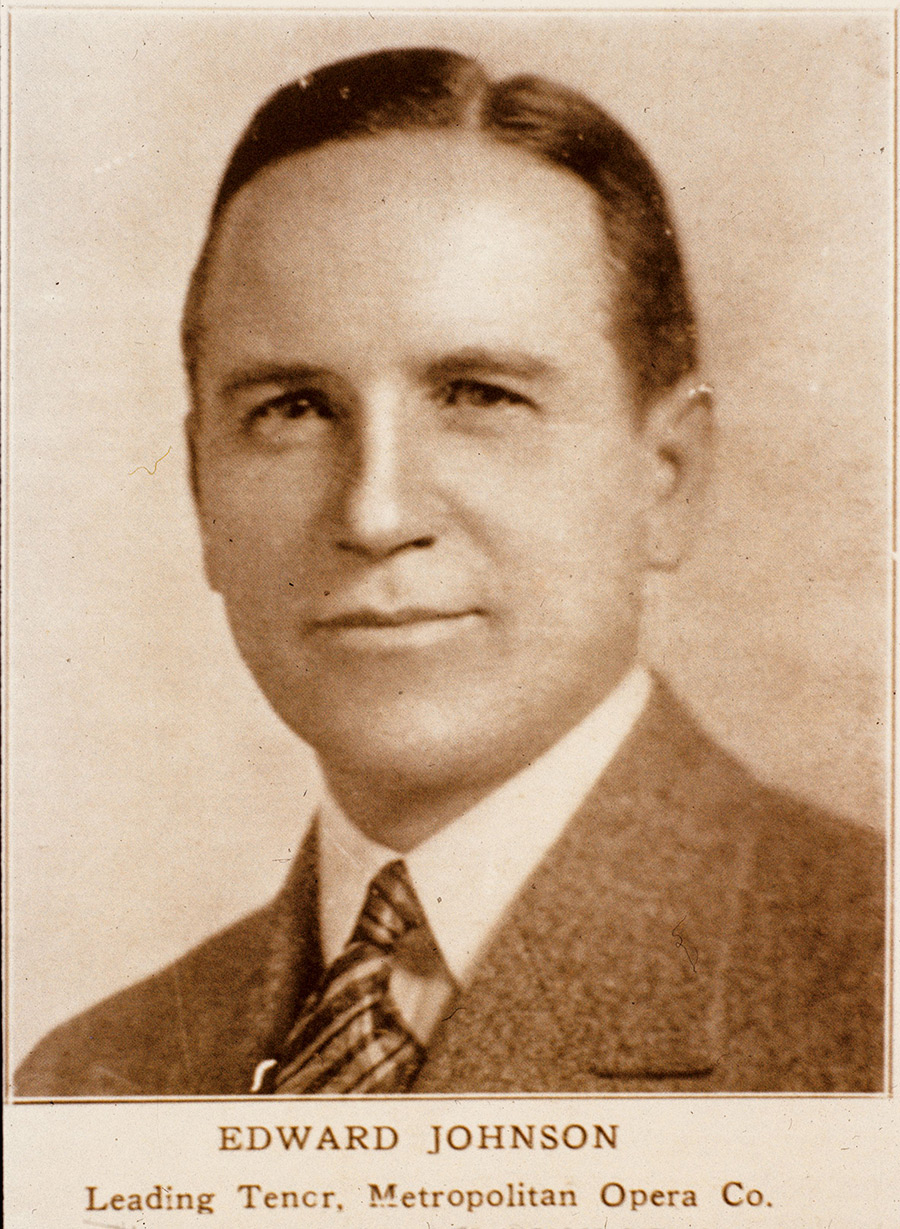 Last week’s column ended with the first night of Guelph’s 1929 music festival, organized in large part by Edward Johnson, who at the time was perhaps North America’s most celebrated tenor.

This week the story picks up the following afternoon, on May 8, when conductor Luigi von Kunitz and the Toronto Symphony Orchestra presented a special program for Guelph’s school children at the GCVI auditorium.

The first part of the afternoon consisted of the introduction of the various instruments of the symphony orchestra. Thirty years later, Leonard Bernstein would use a similar teaching method in his popular television shows. In 1929 the demonstration was perhaps even more effective. Very few of the students had ever heard a symphony orchestra, except perhaps on low-fidelity recordings and radio broadcasts.

The Toronto Orchestra followed the demonstration with several short and lively selections from Tchaikovsky’s work and from Grieg’s Peer Gynt. Pleased with the attentiveness of the students and their reaction, Johnson stepped out and sang several pieces as a finale, though that was not originally part of the program.

That evening the two-day festival had its grand finale, headlined by the Toronto Symphony and the Vogt Boys Choir. Those who were there said it was the largest crowd ever in the GCVI auditorium. The Guelph and Toronto papers put the number at over 3,000, certainly a slight exaggeration. Some attended from as far as Toronto and Owen Sound.

The Vogt Choir, led by R.G. Geen, opened the concert. It was the first public performance by the group, which had been established the previous year. They sang popular selections from Gilbert and Sullivan, and ended their portion with a rousing version of Rule Britannia. The Boys Choir of St. George’s Church followed.

The full orchestra came out and launched into the overture from Weber’s Oberon, followed by other short selections. Then Edward Johnson stepped onto the stage. The audience erupted into a spontaneous roar. Accompanied by the orchestra, he sang selections from Pagliacci, and other pieces from his roles at the Metropolitan Opera.

The program listed a couple of selections by the Vogt Choir and the Toronto Orchestra as the finale of the evening, but those familiar with Johnson’s theatrical instincts knew better.

Johnson returned to the stage for three encores, performing some of the sentimental old favourites that he had performed years before at the beginning of his career: Drink to Me Only, Mother of Mine and Tally Ho among them. Then he motioned the Vogt choir back, to accompany him and the orchestra in a couple of arias from La Boheme.

Critics from the Toronto papers were there that night, and they wrote ecstatic reviews. Johnson had succeeded in his aim of bringing good but accessible music to a broader public, and to introduce them to classical masterpieces. As well, he considered the festival an indication of the usefulness of his $25,000 gift to the city, payable over five years, to subsidize the music program in the Guelph schools.

The Wednesday evening performance ended the festival, but Johnson stayed in town for the rest of the week, basking in the success of the event and encouraging others to plan something similar for 1930. He gave several lengthy interviews, had lengthy discussions with Charles Crowe, Reg Geen of Guelph’s Vogt Choir and the Toronto Conservatory, and Craig Evans, who had headed the 1929 Festival Committee.

On Thursday evening Johnson showed up at the Guelph General’s commencement for graduating nurses. Called on to speak, he told the new nurses that their profession is “both noble and arduous,” and he urged them to “uphold the high traditions of Guelph and Canada.”

The following noon he attended the Rotary Club’s weekly luncheon – he always tried to time his visits to Guelph to include a Rotary function.

To spend the week in Guelph in May 1929, Edward Johnson left the spring tour of the Metropolitan Opera. He rejoined the tour on May 11.

For various reasons, the May music festival did not become an annual event as Johnson had hoped, but the school program he sponsored received much publicity and recognition. His last $5,000 check arrived in Guelph in 1932, and by then the economic depression meant everything had to be considered in a new light. Nevertheless, Guelph’s schools continued a music program that was far in advance of those in most other cities of it size.

Guelph and area residents had a chance to hear Eddie Johnson, the hometown boy, frequently on the NBC radio network beginning in 1931 with regular Saturday afternoon broadcasts of the Metropolitan Opera from New York.

In 1935, at the age of 57, Johnson retired from his performing career, and moved to the front office of the Met as its general manager. He had been assuming management chores for several years. Met officials quickly saw that he was a very effective fundraiser and public relations man amongst the New York elite.

It was a troublesome time for the opera, with depression conditions threatening the viability of the organization. As well, there were the day-to-day chores of running a substantial business. Including all the singers, musicians, stage hands, set builders, costume sewers, cleaners and office staff, Johnson had to figure ways to meet a payroll of more than 800 people every week.

Nevertheless, Johnson aggressively pursued the biggest names in opera to join the company, and he encouraged them to appear as guests on various comedy and variety radio shows. Consequently, more than a few became household names, and the Saturday afternoon opera broadcasts attracted ever larger audiences. That, in turn, helped sell tickets for the spring and summer tours by the company.

One of his achievements with the live radio broadcasts was securing the exclusive sponsorship of Texaco in 1940. That brought a measure of stability to the Met’s finances. It was a relationship that would last more than 60 years, probably making it the longest corporate sponsorship in broadcasting history. During the 1940s, the Met broadcasts regularly drew more than 10 million listeners in the United States, Canada and overseas.

Johnson began easing out of his duties in the late 1940s, preparing for his retirement in 1950, when Rudolf Bing succeeded him. In 1947 he accepted the chairmanship of the Toronto Conservatory of Music. On his retirement in 1950 Johnson returned to Guelph permanently, to his estate on Woolwich Street, a little north of Speedvale Avenue.

His daughter Fiorenza had cemented ties to Canada earlier with her marriage to Guelph native George Drew in the late 1930s. Proud of his military background, Drew was then plotting a career in politics. He became premier of Ontario in 1943, serving until 1948. He then turned to federal politics, heading the Progressive Conservative party for eight years, but failing in his ambition to be prime minister. Fiorenza was a great asset to him with her social graces.

Though his name was well known in international music circles, to the folks at home he was still Eddie Johnson, gregarious and lacking in the pretensions that most people associated with music and opera people. The city recognized him in 1955 by naming a school for him.

After considerable thought, in 1957 Johnson, with the assistance of several of the city’s leading lights, established and endowed the Edward Johnson Music Foundation. In purpose, it differed little from his aims 30 years earlier, when he decided to give the city $25,000 and organize a music festival. The foundation would provide funds to send professional musicians to the city’s schools for demonstrations and workshops, and provide funds for scholarships to promising students. As well, he wanted to make high-quality performances available to everyone in the city.

On April 20, 1959, Johnson put on his formal evening outfit, complete with white gloves, for a performance by the National Ballet at Guelph’s Memorial Gardens. A moment or two after he stepped through the door he collapsed. Johnson had suffered a heart attack, and it was fatal.

One of Edward Johnson’s hopes for his foundation was to revive the festival he had initiated in 1929. Before he died, there was some thought of staging such a festival in connection with the Stratford Festival, but nothing came of the idea at that time.

Canada’s centennial celebrations in 1967 provided the catalyst for a permanent festival at Guelph. In 1966, Murdo MacKinnon, Dean of Arts at the University of Guelph, helped organize, for the centennial commission, a conference on the role of universities as cultural leaders. One thing led to another, and the result was a request for the Edward Johnson Foundation to host a national vocal competition in Guelph in May 1967.

At the conclusion, Nicholas Goldschmidt, who was in charge of performing arts for the Centennial Commission, suggested a music festival in Guelph in 1968. The Czech-born Goldschmidt was then a major force in Canadian music, founder of the Canadian Opera Company, and a festival organizer.

The Guelph Spring Festival offered its first program in 1968, with six performances and Goldschmidt as musical director, a position he filled until 1987. Edward Johnson would have been pleased at the festival’s continuing emphasis on Canadian music and performers.

If there was a sad note to that first season, it was that Edward Johnson had died nine years earlier, and was not able to participate in his dream: to provide the best music available to the people of his hometown.

*This column was originally published in the Wellington Advertiser on June 3, 2001.