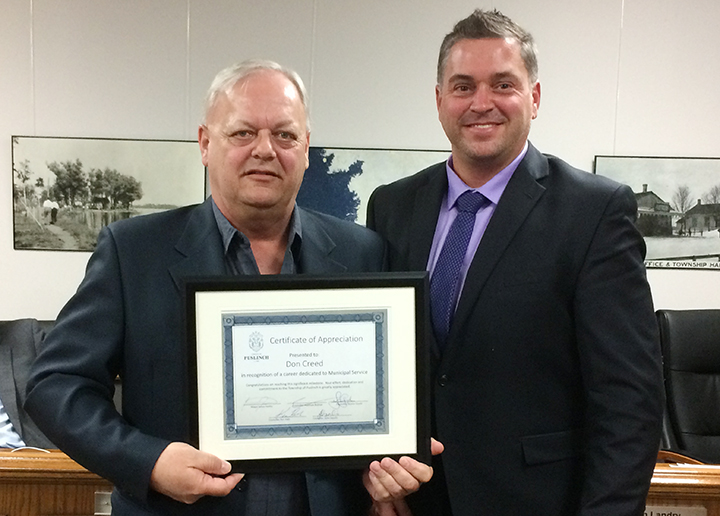 ABERFOYLE – Don Creed has reached the end of the road in Puslinch.

April 17 marked Creed’s final council meeting prior to his retirement as the township’s director of public works and parks.

Council offered congratulations and best wishes to  Creed, who leaves the position after eight years.

“You truly will be missed and I really appreciate the professionalism you’ve provided to me as a constituent,” said Mayor James Seeley, who presented Creed with a certificate.

Creed thanked both past and current council members “for the trust and support you’ve shown me over the past eight years.

“While we may not have always seen eye to eye, we’ve always shown respect for one another.”

He added, “I will be leaving proud of my accomplishments and my respective departments.”

Noting many challenges lay ahead, Creed advised “stay the course, continue to work together and you will be successful.”

He also thanked current and past staff for their support, adding “It’s been a great eight years.”

Councillor Matthew Bulmer recounted his first meeting with Creed when he was a volunteer with the local Aberfoyle Farmers Market.

“In that role I was dependent upon your experience,” said Bulmer.

A few years later as he rejoined council, Bulmer leaned on Creed for his insight to solve problems affecting residents across the township.

“Through all of that, what I came to respect the most was your ability to fulfill your role as department head of public works – yet still keep your boots firmly on the ground,” said Bulmer.

Councillor Jessica Goyda said she has not worked with Creed for a long time but she thanked him for being “tremendously welcoming, very insightful, very candid and always willing to share information.”

Sepulis considered Creed as “one of a dying breed – in the sense that he’d worked his way up from the bottom …  as the saying goes, the cream rises to the top.”