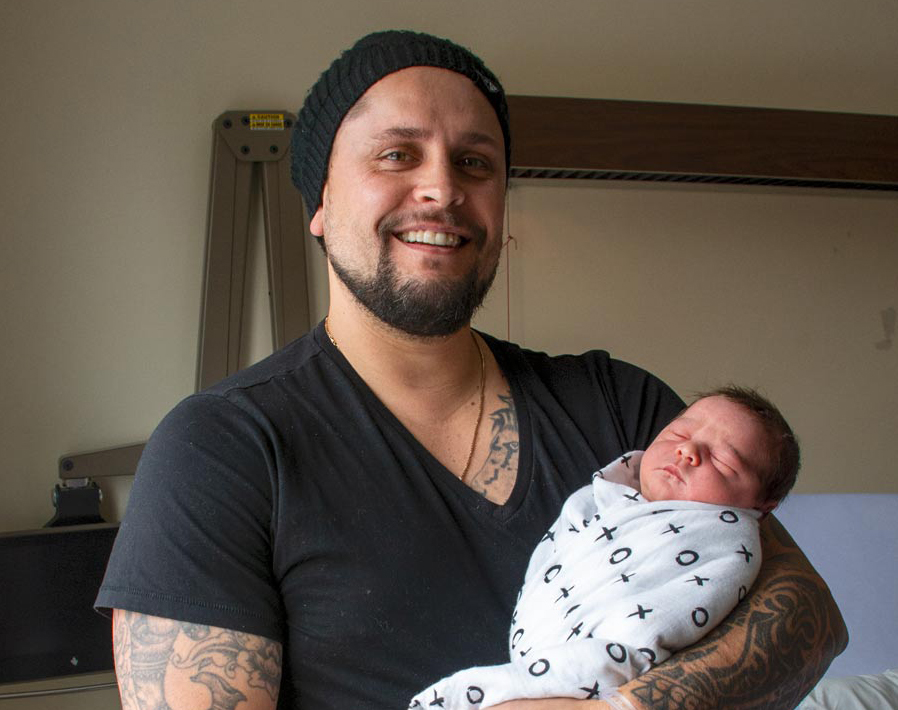 New year’s baby - Markus Merrill with his new son Jack William Merrill, who was born at 4:16pm on New Year’s Day and was the first baby born in Wellington County in 2020. Photo by Jaime Myslik

Parents Jessie and Markus Merrill are no strangers to parenthood; Jack is their third child, but their first boy.

Jessie said their daughters, Ava, 5, and Aubrey, 3, are “in love” with their new baby brother.

The Merrills knew Jack would likely arrive sometime in January – his due date was Jan. 13 – but his birth on New Year’s Day was a bit of a whirlwind.

The couple’s daughters arrived on or within a day of their due dates.

“We thought we kind of had it narrowed down as to when he was coming,” Jessie said.

However, she started feeling mild cramping on the morning of New Year’s Day, similar to the labour pains during her two previous pregnancies.

The midwife checked on her at the family’s Rockwood home at about 1:30pm. Jessie was told she’d need to labour at home for a few hours.

Throughout the day, Ava sat with her mom and offered support.

“My eyes were closed half the time and I thought it was my mom rubbing my arm for the longest time,” Jessie said.

“I look up and it’s Ava. She’s just sitting there rubbing my arm, getting me a cloth. Very involved.”

About an hour after the midwife left, the contractions picked up.

However, Guelph General Hospital’s maternity ward was full. While Jesse could have had a home delivery, the couple wanted to be at a hospital.

Markus drove them to Groves and they were in the delivery room by 3:50pm. Jack was born at 4:16pm.

“Needless to say, I didn’t have any time to do anything,” Jessie added.

Jack’s birth marks the final New Year’s baby born at the current Groves Memorial Community Hospital site because the new hospital is set to open later this year in Aboyne.

When Jack was born Jessie said the first thing she thought was “holy hair.”

“I was just in shock really,” Markus said. “I mean it’s the third time but it doesn’t get old.”

They also said the birth was fast and intense.

“It was like he showed up and you didn’t really have time to gather your thoughts,” Markus said. “It was just go time.”

Further north, the first baby born in the North Wellington Healthcare Alliance was at Palmerston and District Hospital on Jan. 1 at 5:48pm.

Miya Lee Beckberger is the daughter of first-time parents Jennifer Henderson and Jordan Beckberger. She weighed six pounds, 11 ounces and is 20 inches long.