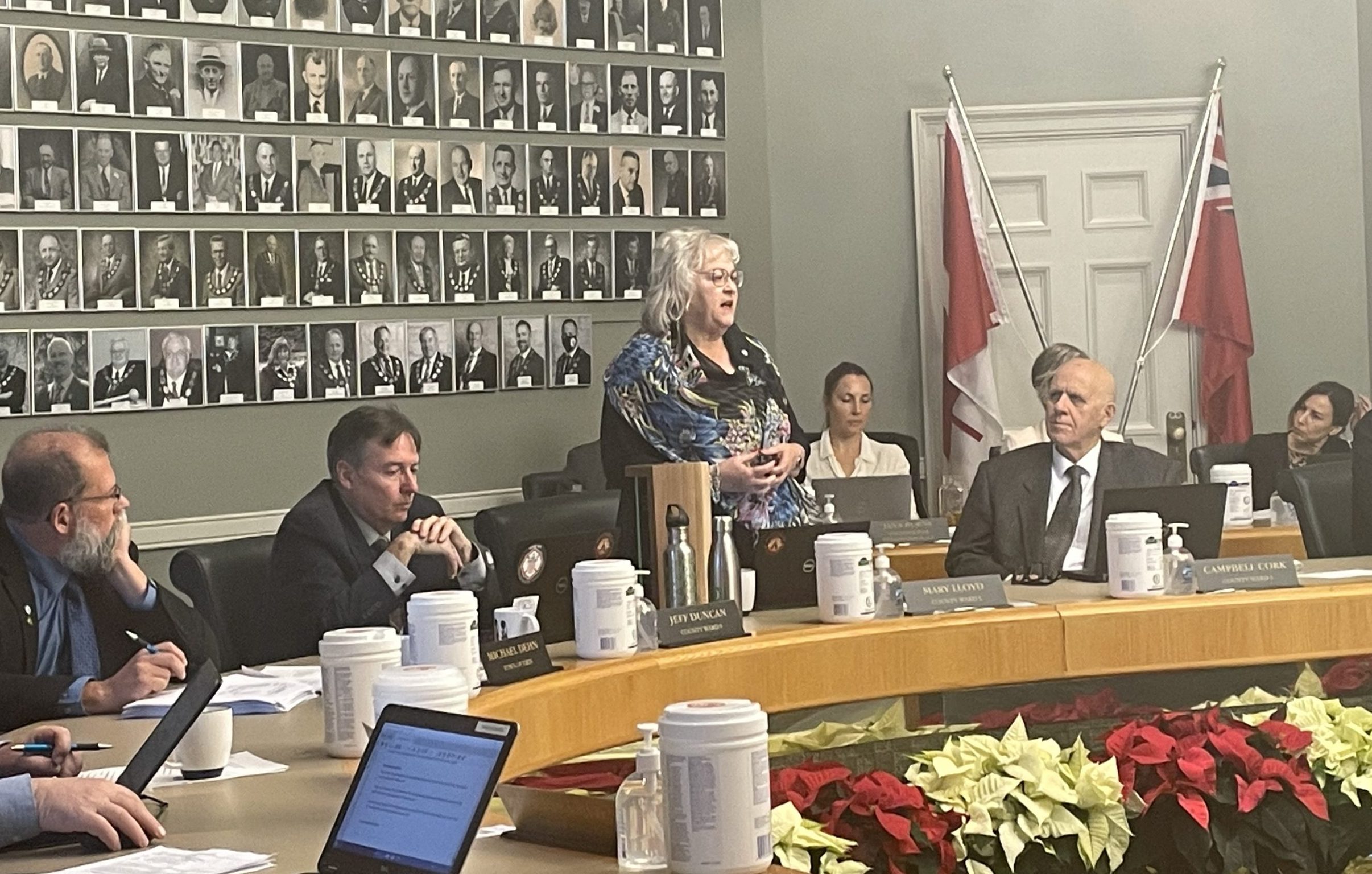 “This is absolutely horrible legislation coming from the province,” said Mapleton Mayor Gregg Davidson at the Dec. 1 county council meeting.

“It affects us here at the county and affects every municipality in Ontario, when it comes to finance.

He added, “It’s actually going to put a halt to it because we don’t have the wastewater capacity. And there will not be any finances to actually build it and expand it.

“So it’s going really slow us down in rural municipalities especially.”

Davidson’s comments followed a report by councillor Mary Lloyd in response to a staff report presented at the Nov. 10 planning committee meeting, held prior to the Nov. 28 passage of Bill 23 in the provincial legislature.

To further the province’s stated goal of building 1.5 million homes over 10 years, Bill 23 allows up to three units on a property in all neighbourhoods across Ontario, provided the square footage of the building remains the same and the height abides by local municipal rules.

In addition, under Bill 23 almost all third-party appeals to the Ontario Lands Tribunal will be eliminated.

While the applicant, usually a developer, can appeal and municipalities can appeal, third parties – such as residents or environmental groups – can’t appeal, unless an adjudicator gives them specific permission.

An adjudicator can also order the losing party to pay costs.

Staff note there is “a substantial amount of material posted for consultation and little time to respond” (most comments are due by early December).

“Unfortunately, this timeframe does not allow for many newly-elected councils (including Wellington County) to meet and discuss their comments,” the report states.

Noting more information is expected to follow as Bill 23 regulations are developed, the report indicates “the full impact” of the legislation is still unknown.

The report points out action is required to deal with Ontario’s “housing crisis” and several of the province’s initiatives support recommendations of the county’s attainable housing strategy, such as:

Lloyd noted a “spirited discussion” on the bill took place at the Nov. 10 committee meeting.

She said the legislative changes impact all residents of Wellington County.

“But the one that strikes a chord with me the most has to do with the public input.

“Removing the opportunity for our residents in any area to come forward with questions and concerns about the development in the area in which they live, to me, is a detriment.”

Bill 23 opens up about 7,400 acres of the Greenbelt to development.

While the government has promised to designate over 9,000 acres of other land into the protected zone, the majority of that promised land – about 7,000 acres – is concentrated in the Town of Erin.

“This change is significant to Wellington County. It affects properties in Puslinch and in Erin and we need to make informed decisions and input needs to come from our communities,” said Lloyd.

Councillor Diane Ballantyne called the information in the staff report “quite alarming.

“I echo your concerns with regard to the democratic inputs and the environmental concerns, the removal of the conservation authority voice and the impact on long range provincial planning framework,” she stated.

Quoting an Association of Municipalities of Ontario statement on Bill 23, Ballantyne said, “The assertion that the nationwide housing affordability crisis is the product of Ontario’s land use planning and environmental protection framework and municipalities (being) slow to approve planning applications is objectively false.”

Councillor Jeff Duncan asked if the county would be sending formal comments on the bill to the Ministry of Municipal Affairs and Housing.

Director of planning and development Aldo Salis said county staff have had discussions with Town of Erin planning staff “expressing the same concerns that have been talked about and the position of the county, historically, on the expansion of the Greenbelt.

“So we have written a letter to the minister outlining that very briefly, expressing concerns and also highlighting that the Town of Erin requires employment lands,” and is in the process of identifying such areas as part the county’s ongoing Municipal Comprehensive Review.

Councillor Earl Campbell pointed out the legislation is evolving as regulations are drawn up.

“On Tuesday of this week, there was no impact to our county financially based on the development charges we passed last June. We just hit that deadline and it was good,” he noted.

“As of this morning, it’s been moved back six months, so there is now a financial impact to this county. Our treasurer is going to have to sit down and recalculate.

“At this point it’s very much a moving target.”

Centre Wellington Mayor Shawn Watters objected to the timing of the bill’s passage, so soon after the Oct. 24 municipal election.

“Everyone is in transition right now,” said Watters.

He added, “And as partners in this whole endeavour to keep things going and make this a great place to live, there’s supposed to be discussions and dealings with each other and being respectful.

“But I find that this process has been not very respectful … especially in our community where we’ve done a wholesale change of our council.”

“But there is regulation yet that has to be crafted to be implemented. So I think it’s important that we continue to advocate for what we think is important.”

The warden also pointed out he has received a copy of a response from municipal affairs minister Steve Clark to the AMO regarding the association’s concerns.

“And in there is the explicit commitment to make sure that municipalities are kept whole financially,” said Lennox.

“So, if that’s the case, we’ve got a lot of work to make sure that we know how that’s going to work and how we’re going to make that part of the reality.”

Lennox added, “I think we’re open to being a partner with the province in terms of getting more housing built in our communities.

“But it needs to be a partnership and a partnership, as was mentioned earlier, involves dialogue. And this point it’s not really been an example of good dialogue.”

“Financially whole? I’m looking at this and thinking how long is that going to last?” asked Davidson.

“Look how financially whole our communities are for farm tax rebates? That didn’t last that long.”

The province’s Farm Tax Rebate program was re­placed in 1998 with a system that required municipalities to lower the rate charged to agricultural properties to 25% of the residential rate.

At the time the province agreed to compensate municipalities for the impact of the change with through programs like the Ontario Municipal Partnership Fund (OMPF).

However grants to municipalities through OMPF have been steadily declining.

In a report at the Nov. 29 administration, finance and human resources committee meeting, treasurer Ken DeHart pointed out OMPF funding to Wellington County and its member municipalities has dropped by by a combined total of just over $4.9 million in annual funding since 2012.

The planning staff report was accepted for information and will be forwarded to the Ministry of Municipal Affairs and Housing and circulated to member municipalities for their consideration prior to provincial comment deadlines.