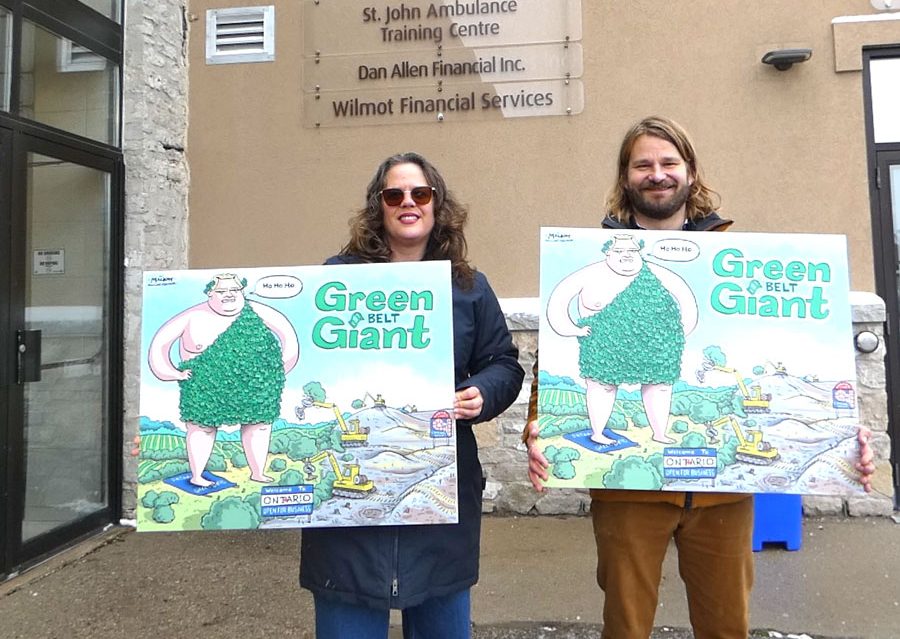 About 40 people protested outside Wellington-Halton Hills MPP Ted Arnott’s office on Nov. 15 against the Doug Ford government’s proposed Bill 23, that would see swaths of the Green Belt turned over for development. These two hold signs portraying Ford as the "Greenbelt Giant." Submitted photo

The bill proposes sweeping changes to many acts already in place – heritage, planning, development charges, conservation, and aggregate to name a few – with the stated results of building more affordable and attainable housing across the province.

But local resident Mike Nagy called the bill “the biggest financial and environmental scandal I’ve seen in my lifetime, and it won’t add one attainable house to the market.”

Nagy calls himself an environmental and social “actionist” who spent 10 years working with other organizations to ensure there is a Greenbelt in the province and that it is protected from future development.

The Greenbelt provides a natural habitat for wild animals, birds, flora and fauna, helps protect water sources, acts as a flood plain and benefits humans, who especially since the pandemic have found solace and mental health benefits from being in natural settings.

Bill 23 proposes to allow more development in specified Green Belt areas to accommodate current and future homebuyers. And it proposes that conservation authorities sell land to developers for housing.

“It’s a land grab, this omnibus bill, and it manacles and underfunds municipalities,” Nagy said.

“And there’s been no public input. Doug Ford talked about how he’d never do this. Now he’s doing it.”

Nagy has worked with Wellington Water Watchers, Save Our Water, Ontario Nature and other environmental groups, who also came out on Nov. 16 to voice their objections to Bill 23.

Nagy said it’s no coincidence the bill, which will remove local planning authority from conservation areas and municipalities, was tabled on Oct. 25 – the day after the municipal election.

“This was done while councils were in transition,” he said. “It marginalized municipalities.”

Under the proposed bill, conservation authorities will be required to sell off some of their land for development.

Nagy said that is a mistake.

“Hurricane Hazel decided a lot of things for us,” Nagy said, noting conservation lands are often flood plains and not suitable for housing.

“We have never needed conservation lands more. This is regressing during a time of the planet that should be all hands on deck.”

Nagy said there are 88,000 acres of land designated for development and that’s enough, if done properly, to accommodate a swelling population and the 1.5 million homes the province projects need to be built over the next 10 years.

“There are a million things they could be doing to make homes attainable,” Nagy said, listing changing tax laws among them.

“This is not a minor thing. It’s massive and we’ll be feeling the implications – foreseen and unforeseen – for years to come.

Elora resident Donna McCaw also attended the protest and she shared many of Nagy’s concerns.

“I’m very concerned about opening the Greenbelt to developers, the undemocratic (removal of) the voices of municipalities and citizens, and no consent from First Nations,” she stated in an email to the Advertiser.

“There is lots of land put aside for housing without breaching the Greenbelt.

“This is worth billions and once (the land is) gone, it cannot come back. Wetlands, ecosystems and watersheds are at risk.”

Nagy said the Green Party of Ontario is working on organizing future rallies and information campaigns. He added that Green Party leader Mike Schreiner is working with the Liberals and NDP on joint action against the bill.