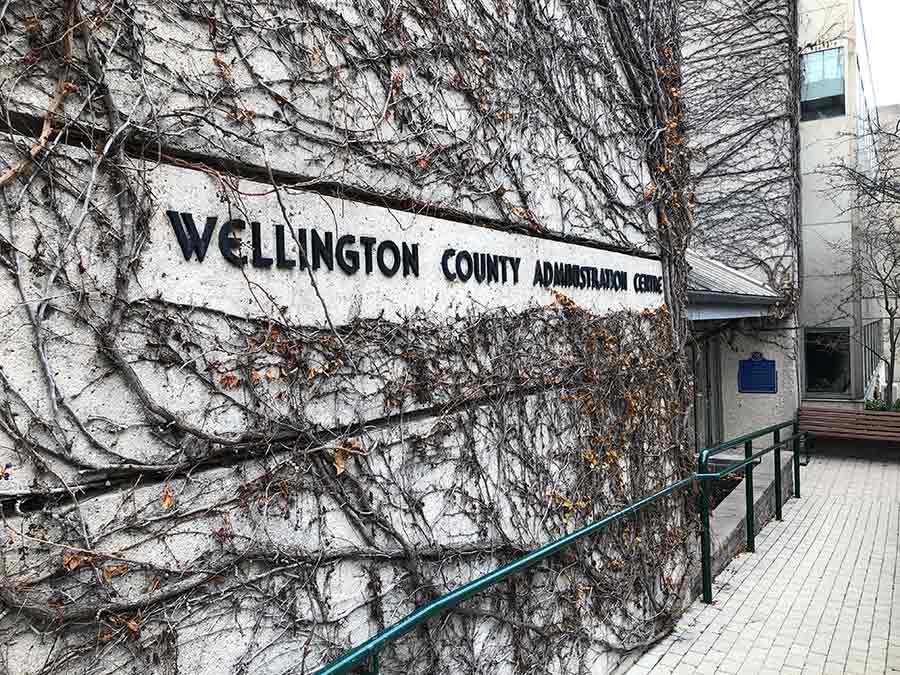 WELLINGTON COUNTY – County councillors are planning to work with staff through committees to reduce a proposed 2.5 per cent tax rate increase in 2021 to 1.25% or less.

At a special budget meeting on Jan. 11, treasurer Ken DeHart presented council with a proposed 2021 budget essentially unchanged in terms of bottom-line figures from an update to the county’s 10-year plan provided to councillors in November.

The 2.5 per cent increase would have meant a property tax increase of $16 per $100,000 in residential assessment.

DeHart opened the Jan. 12 meeting with a report on the impact of the COVID-19 pandemic on county finances in 2020.

He explained support from upper levels of government and expense reductions due to mitigation measures are “likely to generate a larger surplus position than we had originally projected in 2020.

“Staff will come forward with recommendations in the future on how to allocate this surplus to address the impacts of the pandemic specifically, recovery efforts and future infrastructure investment,” said DeHart, noting that typically happens once the county finance audit is complete, unusually in March.

“It sounds like we’re doing very well financially on this and I just wondered, do you think surpluses are going to be clawed back, or is this just bonus time?” asked councillor Campbell Cork.

DeHart said government officials have indicated “they are not planning on reconciling or clawing back any of these funds.

“They are to be used for our purposes. They are to be spent on the guidelines. We do have to report what we spend the funds on to the province. But they are not planning on clawing back any of the funds as long as you meet the eligible categories,” Dehart explained.

Noting the 2020 surplus projected in the November report was between $1.7 and $2 million, councillor Jeff Duncan asked what a typical surplus would be.

DeHart confirmed the county had ended with surplus funds of around $1.5 million for “the last few years.”

Duncan asked if any funds beyond the normal surplus amount could be used “to somehow lower the tax rate?”

DeHart cautioned against simply applying the surplus against the levy to lower the tax rate due to the impact on future budgets.

“We want the use of the surplus to be sustainable. So, we typically don’t just reduce the levy impact just by the surplus, because then you have to immediately make up the surplus the following year,” he explained.

DeHart said surplus funds are usually applied to lower the cost of “infrastructure impacts,” which has a positive effect on the bottom line going forward.

“Could you use some (of the surplus) for the current year? You could. But I wouldn’t use too much of it because then you’re creating a problem for the following year,” said DeHart.

He told council there are two “primary drivers” of the proposed tax increase for 2021:

“You take those two items, you’re at 2.7 per cent and everything else is offset by growth,” he noted.

However numerous council members called for a reduction in the proposed increase.

“Instead of putting just over $20 million into reserves this year maybe we should lower that a bit?” suggested councillor Steve O’Neil, who also suggested utilizing a portion of the current surplus to lower the levy.

“These are unprecedented times and there are people in extreme problems,” O’Neil stated.

“We do have healthy reserves at $68 million … and this is the time to use them,” he added.

Councillor Gregg Davidson said, “We have as a community been impacted by a pandemic the likes of which has not been seen for over 100 years.”

He thanked DeHart and staff for their “great work” in getting the potential increase down to 2.5%.

“However, because of the financial hardship that many of our businesses and our residents have endured in 2020 and are going to continue to endure in 2021, the impact of business closures on our communities  … the mental health of our residents, of our business people, this can’t be underestimated … For this we need to dig deeper,” said Davidson, adding council could utilize funds from the 2020 surplus or reserves to reduce the tax impact.

“We can take money out of the Continuum of Care reserve,” he added, noting the proposed seniors community project “is years from going forward.”

Davidson made a motion to direct staff to work with committees to reduce the tax impact for 2021 to 1.25 per cent or below.

“I am in support,” said councillor Andy Lennox. “I think we have lots of opportunity to move this down the road fairly far.”

“I support providing such a target for staff and the committees to work toward,” said Puslinch councillor Matthew Bulmer, who attended the meeting as an alternate on behalf of Puslinch Mayor James Seeley.

While supportive of reducing the tax increase, councillor Don McKay said, “I don’t think we need a motion to ask staff to work with the committees. They are going to do that anyway.”

He added, “Personally I don’t think we really need a motion,” and pointed out councillors can simply work on reducing the increase at upcoming committee meetings.

“I do support the motion – it does put us on the record,” said Duncan.

Warden Kelly Linton said, “I do support the motion as well. I do think that a number is required. Good governance requires that we give clear direction.”

Councillor Alan Alls noted he has already heard from the public following media reports on the projected 2.5% increase.

“The Wellington Advertiser already said that we’re [projecting] 2.5 per cent and I’ve already got hate mail on it from a resident. So just to give you an idea that people are watching,” said Alls.

Duncan added that he had “received some email on that as well.”

Council approved the motion to work on reducing any tax increase in the 2021 budget to 1.25% or less.