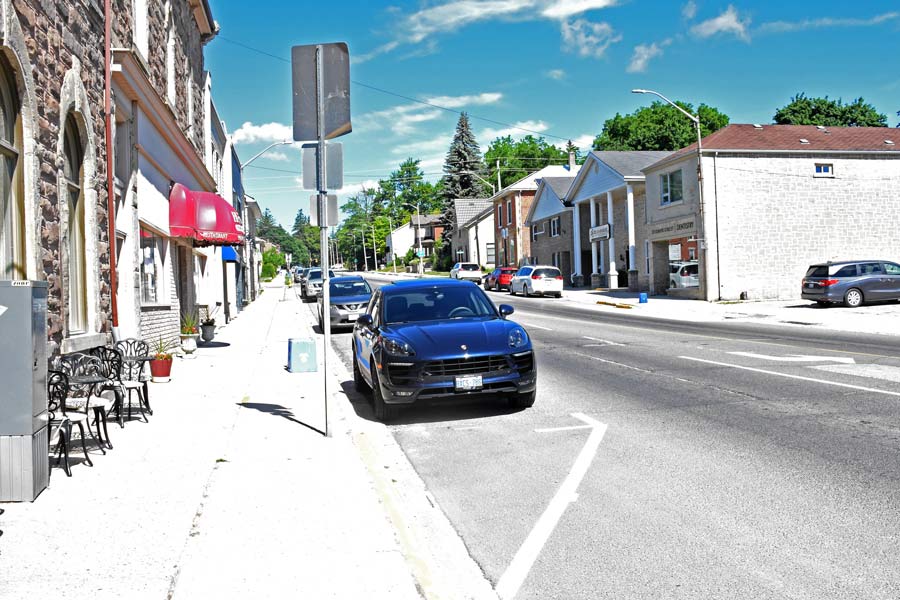 ELORA – Centre Wellington council will revisit its decision to install bike lanes on St. David Street North in Fergus at its Sept. 20 meeting.

At the Aug. 30 council meeting, O’Shaughnessy presented the petition with at least 1,000 signatures from people opposed to the bike lane option.

Water and sewer mains are slated to be replaced in 2023 on this stretch of St. David Street North, which is also Highway 6, and staff presented council with four different ways the street could be reassembled once that work is complete.

O’Shaughnessy said the township’s own public survey indicates 80 per cent of respondents chose an option that was not bike lanes and 69% didn’t want on-street parking removed, “so I was somewhat surprised when council unanimously supported option 4 (the separated bike lane option),” he told council.

He said the feedback he’s received indicates people believe public opinion was ignored, they don’t want on-street parking removed, and they don’t think bike lanes on Highway 6 will be safe – even with a solid barrier between lanes.

“I ask you to reconsider your decision,” he said, suggesting Provost Lane or Maiden Lane as better options for bike lanes.

Councillor Bob Foster made a motion for council to reconsider its decision, which was supported by councillors Steven VanLeeuwen, Kirk McElwain and Stephen Kitras.

“This is where engagement matters most,” said VanLeeuwen. “I think the community deserves another look at this.”

McElwain said, “I felt guilty for voting the way I did within two days.”

“I support bike lanes – and a bike plan,” Kitras added. “Fergus has great potential for alternative roads for bike lanes. I support reconsidering.”

Not all of council was convinced the bike lane option should be scrapped, however.

“It’s imperative that we find different ways to get people to our downtowns,” said councillor Neil Dunsmore.

“This is forward thinking … Bike lanes with barriers is the way to go. If the province doesn’t support it, I would reconsider.”

Councillor Ian MacRae noted that in 20 years the population of Centre Wellington is expected to grow to 52,000 people, “and we have to consider a street design for everyone.”

Mayor Kelly Linton said the bike lane option was “visionary” and “forward thinking” and the beginning of a cycling network.

“It’s critical to have a spine for active transportation,” Linton said.

Colin Baker, managing director of infrastructure services, told council he is finalizing an application for a Connecting Link grant from the province.

“If council changes direction, that puts the process on hold,” Baker said.

Council got into the weeds a bit on how to proceed, but ultimately passed a notice of motion to reconsider its decision at the Sept. 20 meeting in a 4-3 vote.

It will require a two-thirds majority – five of the seven on council – to rescind its June decision and then council can revisit the other options or give new direction to staff.