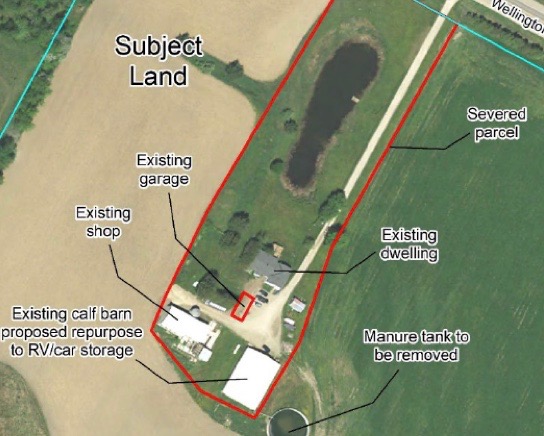 MAPLETON – Council here has denied a request to allow use of an existing barn for a storage business on a severed rural lot.

However, council did direct staff to prepare a draft bylaw including other elements of a zoning application by Aileen and Teade Wiersma following a Feb. 9 public meeting held via videoconference.

The proposal involves rezoning a 3.36-acre parcel of land along Wellington Road 7 as part of a severance application provisionally approved by the County of Wellington land division committee.

The smaller parcel is being severed from an approximately 50-acre agricultural parcel.

The proposed rezoning would:

Wellington County planner Matt Daoust said planning staff have no concerns with the residential prohibition on the retained land, which is a standard provision of rural severance agreements, or the retention of a shop and garage on the severed portion.

“However, we are not in position to support off the off-site storage business or the retention of the barn on the subject property,” said Daoust.

While noting provincial policy allows agriculture-related or on-farm diversified uses in agricultural zones, Daoust said, “The proposal before you does not align with any of these permitted used given that the use is not secondary to the principal agriculture use of the property and would not be characterized as a farm-related commercial business.

“The intent of the official plan is that these businesses are located on farms.”

Daoust also noted the proposal does not meet a minimum 25-acre requirement for a home industry.

“The intent is that a small rural residential lot be limited to its accessory structures,” he stated.

Jeff Buisman, of Van Harten Surveying, spoke on behalf of the applicants.

“I think the issue of this application comes down to the calf barn and whether to keep it,” said Buisman.

“The Wiersmas would really love to make use of that old calf barn.”

He added the barn is “a fairly good and reliable, strong structure,” the Wiersmas “feel it’s wasteful to remove a perfectly good building” and “there’s a demand out there for RV- or classic car-type storage.”

Buisman pointed out the Wiersmas are proposing a low-profile operation with indoor storage only and no signage on the roadway.

Noting there would be “no traffic impact” from the business, Buisman said, “Most importantly, we see that there’s no negative impact on agriculture.

“It’s not a large business for the Wiersmas. It’s a very small business. It doesn’t require any staff. It will be managed from the house.”

Aileen Wiersma added, “While we understand there is good reason for the rules and regulations to be in place, we feel that an exception could be made here.

“The building is in great shape and could be well utilized for storage.”

She said “allowing us to repurpose this structure will keep unnecessary building material out of landfill.”

“The home industry’s for 25 acres, it doesn’t meet that, and there’s too much building for the lot size. Do I have all that (right)?”

Councillor Dennis Craven said, “I have a couple of people at Alma that complain to me once in a while about old motorhomes and trailers parked in driveways.

“They didn’t realize that they lived in a campground. So there is definitely a demand to store this type of thing. But I really don’t believe that this is the place to store them, on this small piece of land.”

“I really struggle with these types of applications because I totally understand everything that the applicants are saying about wasting a building that’s in perfectly good shape,” said councillor Paul Douglas.

Councillor Marlene Ottens asked if the storage use would be allowed if the severed parcel was 25 acres.

“Most likely a 25-acre severance wouldn’t have been supported in the first place, so to go down that path is kind of speculative,” said Daoust.

“The other thing, the 25 acres, it has to be secondary to a farm. So in an imaginary world, if there was 25 acres, there had to be a farm operation.”

Daoust also pointed out the storage business “does not quite align” with the standard for farm-related businesses.

“But there are farmers who do allow people to store recreational, vehicles in their barns or shops over the winter when they have a full farm,” said Ottens.

“What are the options for people who do want to store these vehicles?”

Daoust said such storage facilities would “most likely be suited in an industrial area and it would most likely be in an urban area.”

Linda Redmond, the county’s manager of planning and environment, pointed out “on-farm diversified uses are only allowed as part of a farm operation,” and official plan requirements “specifically state that off-site seasonal storage is not permitted.

“So it’s not typically an on-farm diversified use that’s normally permitted.”

Councillor Michael Martin said, “Almost 7,700 square feet of accessory structures … I think anyone would want that type of flexibility.”

However, he continued, “Accessory structures are the root of all evil when it comes to creating problems … who knows what would happen 10, 15 years down the road.

“This is really the only opportunity to bring the property a little closer to being in line with normal and as far as the diversified use, the home industry, one can argue that’s been bastardized terrifically across Mapleton already.”

Martin added, “We’ve got commercial/industrial-type industries existing on farms and it’s allowed, but this is specially listed as being an issue.”

He noted he does struggle with “that whole waste-not, want-not of ripping down a perfectly good building.

“Farmers certainly enjoy a lot of flexibility when it comes to accessory structures as part of a farm use and I think that when you sever off a farm, or a surplus farm dwelling, that should be the expectation that that flexibility disappears with it as well … it has to fall in line with the residential use,” Martin stated.

Ottens said she is “never a fan of tearing down perfectly good buildings; I realize that there are policies, but I realize that we can make exceptions if we want to.”

However, she added, “I recognize I’m in the minority on this.”

“Taking down a building is not something I want to do,” said Davidson, adding that as chair of the county’s solid waste services committee, “having it go into a land fill is something I don’t want to see.”

Council directed staff to prepare a draft bylaw including residential prohibition on the retained portion and allowing the shop and garage, but not the barn, to remain on the property.