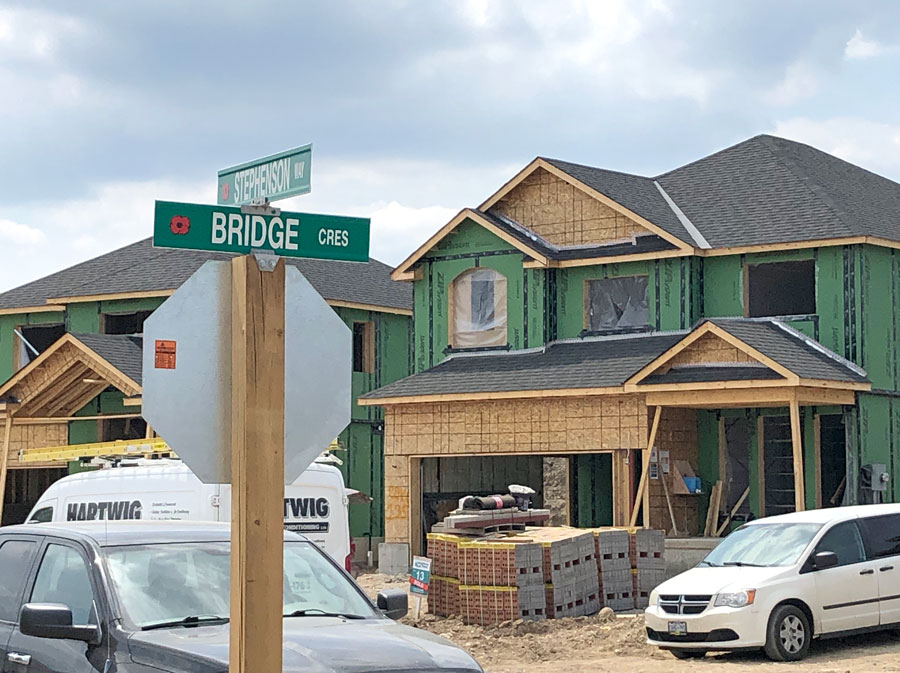 MINTO – Officials here are concerned some provincial efforts aimed at improving housing affordability are doing more to create red tape than to correct the problem.

“Some homes in Minto’s urban centres have apparently attracted $1 million dollar bids. If this continues, there will soon be little hope first time buyers living in the area can buy a home,” White states in the report.

“One million dollars in equity is an attractive situation for people who own homes. The unfortunate result is that they may have no option to ‘downsize’ in the area if there is no supply of smaller units.”

While Greater Toronto Area prices have come down in recent months, White notes there is no capacity to increase the supply.

“People have to drive further and further from larger communities to find an affordable home,” he syayed.

“Soon there will be nowhere to drive to for affordability.”

Following White’s report, council declared its support in principle for a resolution from the Township of Cramahe opposing several elements of the province’s Bill 109, the More Homes for Everyone Act.

Cramahe specifically opposes requirements in the legislation to:

“I feel like when I got into looking at Bill 109, it is counterintuitive,” White told council during a videoconference presentation.

“It added more regulation. It added the opportunity for the province to require you to report on things.”

In addition to Bill 109, the Triton Engineering report also addresses a report from the Ministry of Municipal Affairs and Housing’s Ontario Housing Affordabilty Task Force and a draft land needs assessment from the County of Wellington’s official plan review process.

White stated the taskforce is calling for the creation of 1.5 million new homes in Ontario in the next 10 years.

“So that’s why … my sons, or your grandkids, or your kids are looking at the market and saying, ‘How in the heck am I ever going to get into that? – the housing market – even in the community where I live,’ because traditionally small towns were where, you know, at least we had affordable housing,” he added.

While the task force recommends measures like flexible zoning and secondary units as part of the solution to the housing crunch, White stressed measures should not increase reporting requirements and paperwork for municipalities.

The report notes the Planning Act has been amended 43 times since 2003, “not including dozens of new regulations that still apply.”

White recommends the town ask the province to consider streamlining the Planning Act to pre-2003 levels to reduce red tape.

He also suggests reducing the impact of provincial policy and involvement in local planning to 2005 levels “might be more efficient.

“Tinkering with legislation will not bring about the kind of changes needed to address local concerns about housing cost and supply,” White states in the report.

“Drastic change on how development is perceived by the province, municipalities, planners, developers and the public is needed.”

The report recommends council provide feedback and have staff bring a report back with more specific recommendations to send to the province on a lengthy list of suggestions, including:

“We used to function without development charges,” White pointed out.

“This is a time when housing prices are a million dollars in some places where they never have been like that. I think you need to start thinking about drastic changes. So that’s one of them.

“We’ve had many discussions about little houses and I think that’s littler than anything else we’ve talked about,” said Anderson.

Kuipers noted town bylaws currently allow for accessory units to be as small as 530 square feet.

“We did crunch numbers that you could build a code compliant house down to 190 square feet,” said Kuipers.

However, he pointed out, “It’s an interesting house that would function horribly.

“All the rooms would be combined except for the washroom and you’re talking the sink would actually be in the shower because there’s not enough room for both.”

Anderson also suggested the fact much of the local housing demand is being driven by people moving here from larger centres could impact the community in unforeseen ways.

“The biggest push for housing in our area, from what I can see, is our proximity to larger centres and people don’t want to go any further north,” she said.

“It’s not necessarily because they want to live in Minto because it’s the best place to live – although it is – but that’s not the point. That’s really uncomfortable for us to deal with.”

Anderson continued, “I get that they want to take politicians out of this thing so we’re not interfering in what’s the best practice to build more houses, but is it what’s best for your communities?”

“We want the small-town feel, which is the big lots and large houses,” said Kuipers.

“But we can’t afford to buy those big, large houses with the people that are here. So it’s a lovely Catch 22.”

Mayor George Bridge pointed to a recent stabilization, even a downturn, in real estate prices as a sign the housing situation isn’t unresolvable.

“You’re coming down from a really high peak. We shouldn’t have been there. It’s artificial. Now you’re going to see it level out, so I think we’re going to still be alright, but we still have to work on it,” said Bridge.

“Minto has seen some second unit creation already, and the county projects 120 units of Minto’s 300 possible infilling units between 2022 and 2051 will come from second units,” he pointed out.

Council passed a motion to receive the Triton report and direct staff to review and discuss the suggestions and bring forward a recommendation to the ministry on ideas to improve future housing supply and affordability in Minto and across the province.

Later in the meeting a bylaw was approved to appoint the director of building and planning as the approval authority for site plans, as recommended in the Triton report.