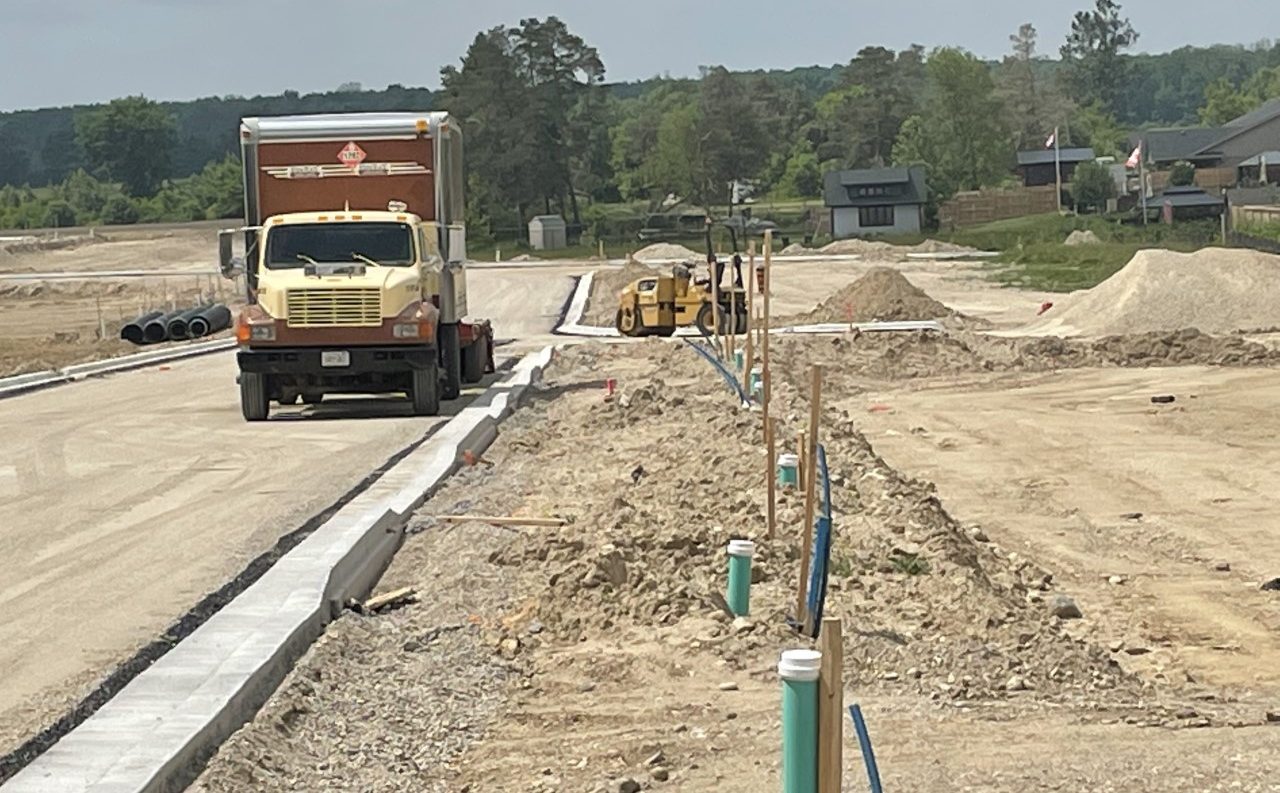 Minto council has approved a subdivision agreement for phase one of the Minto Meadows development in Harriston. Photo by Patrick Raftis

MINTO – Town council has approved a subdivision agreement and water/wastewater allocation for phase one of the Mex Developments residential development at the south end of Harriston.

Council authorized the mayor and clerk to sign the agreement during the June 21 Minto council meeting.

A bylaw passed at the meeting allocates 57 residential units of water and wastewater services for phase one of the subdivision known as Maitland Meadows.

The subdivision has been in the planning stage for several years and site preparation work has been underway for some time.

Council has already endorsed official plan and zoning bylaw amendments, a draft plan of subdivision and a water/sanitary pre-servicing agreement for the project and draft plan conditions have been sent to the county planning director for sign-off on the approval.

A report from Minto planning technician Ashley Sawyer notes all draft plan conditions have now satisfactorily been cleared and a formal subdivision agreement can be executed.

When fully built out, the Maitland Meadows subdivision will consist of 126 residential dwelling units, with 57 single-detached, 30 semi-detached and 39 townhouse units.

The proposal also includes open space, a stormwater management block, a future development block and two park blocks, as well as space allocated for a walkway and roads.

Sawyer’s report points out the development will be split into two phases. Phase one will see construction of 57 single-detached dwellings with a maximum build out period of five years.

“If the developer chooses, they may complete phase one at a faster pace than the five-year timeline,” Sawyer notes in the report.

The report explains water infrastructure in Harriston is sufficient for current needs, but the volume of proposed and existing development means a shortfall is anticipated within the next five years.

“To ensure that development in Harriston does not reach a point where we do not have any water allocation to supply to developments, the town sought a pro-active solution that would control allocations in the short term until a new well can be built,” Sawyer states in the report, which notes a new well can take three to five years to complete.

“We have determined a solution that is similar to our neighbouring municipalities, of providing larger residential developments formally allocated units through an allocation bylaw at the subdivision agreement stage,” Sawyer explained.

“This requires that a bylaw be brought before council and passed to allocate units with an expiration date on the usage of said units. If the timeline to develop is not met, the units will no longer be allocated.

“The developer would have the opportunity to come back to the town and ask for the units to be re-allocated … it would have to be brought back before council to be passed again.”

Minto director of building and planning services Terry Kuipers said the reason for the allocation “is so the builder has sufficient security that you can go ahead and build out that phase.

“It’s just a guarantee for the developer.”

The report indicates the plan in phase one is to build approximately 10 to 12 units a year, with all 57 units to be completed within a five-year timeframe.

Phase two of the subdivision will come before council for allocation of additional units when it is ready for construction.

Councillor Judy Dirksen asked why the first phase of the development includes only single-family residential units, rather than “some of the less expensive housing.”

“It’s not town staff that proposes where the phasing lines are,” noted Kuipers.

“A lot of times development phasing is based on how you want to construct the development,” he added.

“It’s a lot easier building in the back, and then moving the construction zone forward, as opposed to trying to rip construction equipment through occupied dwelling streets.”

“Plus, when we started this … to propose townhomes in Harrison was a scary thing for us, right? Probably three or four years ago, who would have thought that people were going to buy those?

“So that’s part of it, too, is to hope that it catches on and they get sold. I still see a lot of people buying single family homes.”

“This is one of the first large subdivision agreements that staff has put together and staff did a phenomenal job, together with Jerry and his team,” said co-interim CAO Chris Harrow.

“This was turned around very, very quickly and Terry and his group did an amazing job putting this together quickly and getting through everything … the lawyers did comment back that this was one of the best agreements seen in a long, long time.”