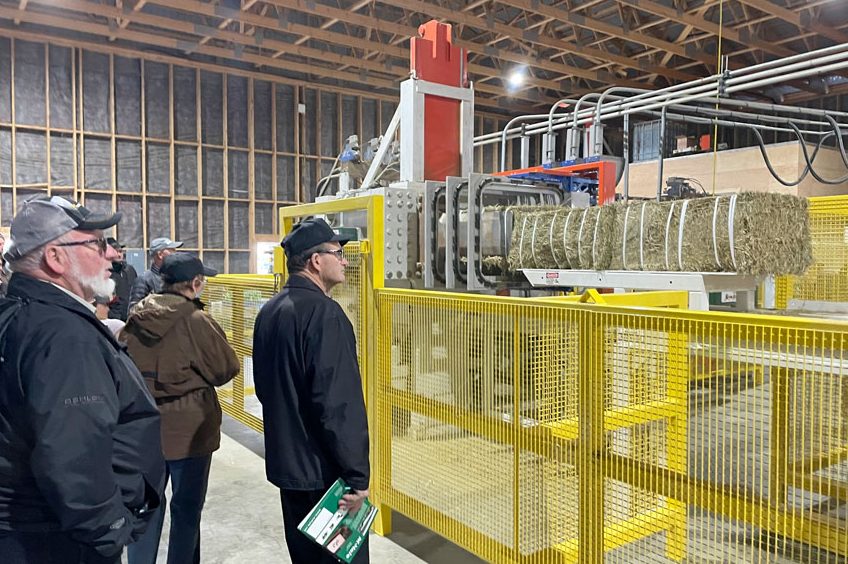 A new hay press, the first located in Ontario capable of double compaction to facilitate export, was unveiled at Marhaven Agri in Mapleton on April 23. About 100 people attended an open house that included demonstrations of the technology. Photo by Patrick Raftis

Hay Press Company, in collaboration with the Ontario Hay and Forage Cooperative, launched the press at an open house attended by around 100 people, which included live demonstrations of the press’ flat pack and bundling systems.

The press can process up to 16 tonnes per hour and has compaction capabilities required for the export hay market.

“This is a real game changer,” company and cooperative officials note in a press release.

Hay Press Company (HPC) president and general manager James Fisher told the gathering that 14 shareholders formed a cooperative to purchase the premium press and bring it to Ontario.

Fisher explained that Marhaven Agri has been contracted to operate the press on HPC’s behalf.

“We’re very pleased with the way that relationship is working out,” said Fisher, noting the farm  provides “tremendous facilities for this operation.”

The double compaction feature of the press is what makes it an asset to potential exporters.

“In order to get the maximum weight into the (shipping) container, we needed a press in Ontario that would compact hay to a density of about 80, 90 pounds per small square bale,” said Fisher.

The ability to customize bale size, combined with availability of hay drying services lets the partners offer a selection of services to allow customers to meet varied market demands.

“When the hay is pressed, we can actually get the maximum load we can handle, for hauling into the U.S.”

“It takes expertise, money and work to get into those markets and therefore a user-organization such as a co-op is required to have the capacity to do that,” said Ontario Hay and Forage Cooperative president Fritz Trauttmansdorff.

While issues related the COVID-19 pandemic and global supply lines can make it seem like “everything’s upside down,” Trauttmansdorff said “there is actually a steady and very good demand all over the world for hay.

“The world trade market is roughly $10 billion,” he added.

In addition to markets in the U.S. and Europe, Trauttmansdorff said strong potential markets for Canadian hay include Persian Gulf countries like the United Arab Emirates, Saudi Arabia, Qatar and Kuwait, as well as Asian markets in South Korea, Taiwan, and China.