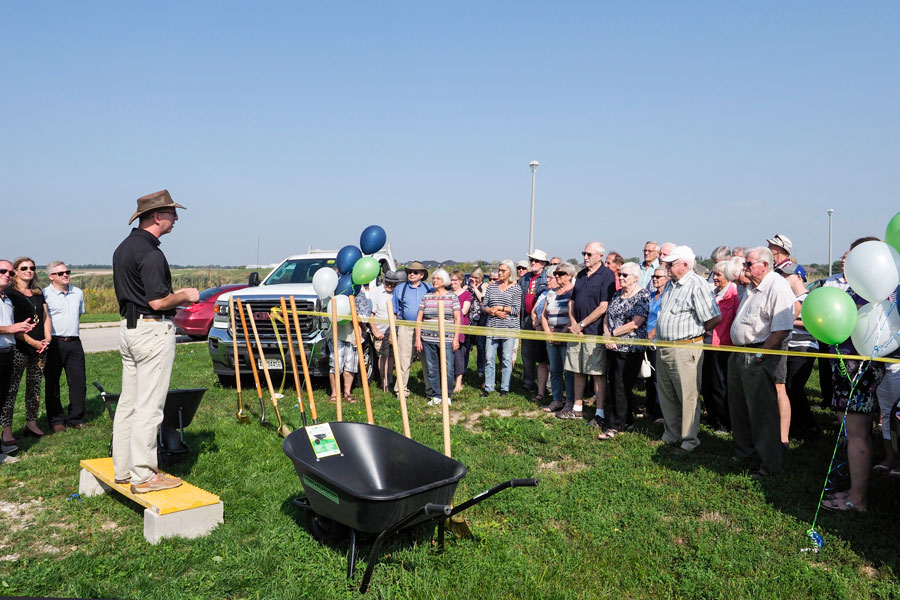 Groundbreaking - Mayor Gregg Davidson spoke during the groundbreaking ceremony that officially launched the second phase of a seniors residential building on 1 Faith Drive in Drayton on Sept. 21.
Submitted photo

DRAYTON – Township councillors, residents and developers celebrated the second phase of a seniors’ retirement residential community, Village on the Ridge, with a ribbon cutting and sod turning ceremony here on Sept. 21.

Phase one (already completed) of Village on the Ridge offers a three-storey apartment building with a basement and provides 17 units, each over 1,000 square feet, to seniors aged 55 and older at 1 Faith Drive in Drayton.

The building was completed in 2013 and is currently fully occupied.

Phase two, also situated on 1 Faith Drive, will be identical.

Construction on the second phase is set to start next week. Move-ins are scheduled for mid-October of next year. Already, there are only seven suites remaining for sale in the second phase.

Originally, previous owners and operators of Wellington Construction, including John Mohle, developed the idea to build a retirement community that would provide one 34-unit residential building to retirees in the community.

“But we realized when we started marketing that we didn’t have a critical mass in terms of interest to build that in one shot, so we redesigned it into two buildings with the same number of units,” said John Zwart, broker of record with Home and Property Real Estate Ltd.

Mohle kept the Village on the Ridge project after he and other colleagues sold Wellington Construction.

Mohle is working on the second phase of the project with Van-Del Contracting Ltd.

During the ribbon cutting ceremony, Mayor Gregg Davidson spoke of the collaboration that made the development possible.

“Our approval process for Village on the Ridge, working with John Mohle, Van-Del Contracting, and others, is an example of how we want to combine our efforts with partners, builders, and developers in setting targets for growth,” Davidson said.

“We aim, as much as we can, to get out of the way, so that they can get on with the business of building residential neighbourhoods in Mapleton.”

At the conclusion of the ceremony attendees were invited into the first phase community room for a lunch followed by a tour of the building. During the tour Zwart shared details on similarities and projected differences between the first and second phase.