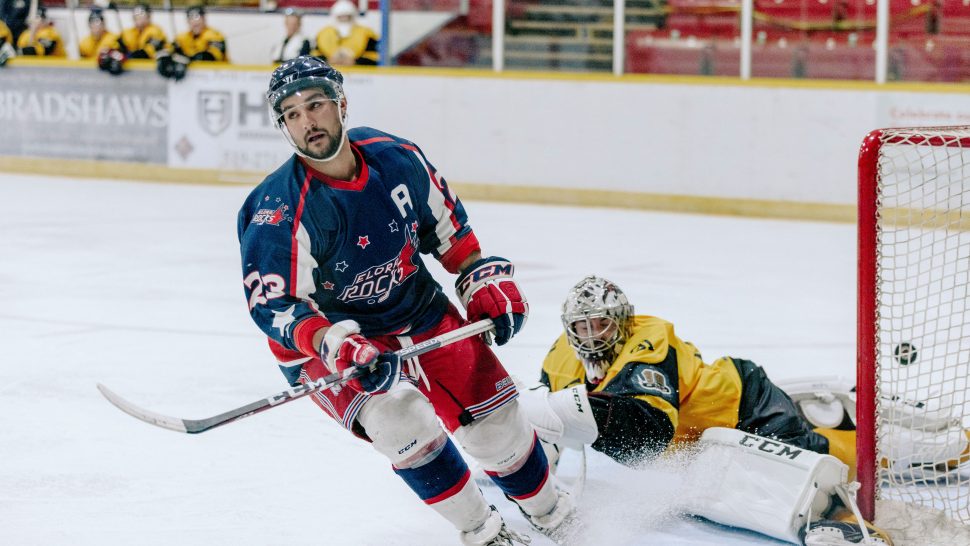 The Elora Rocks hockey team is hosting its home opener this Friday, the third game of the season for the newly-revived team. Here, Tye Campbell scores a goal in an exhibition game against Tillsonburg. Submitted photos 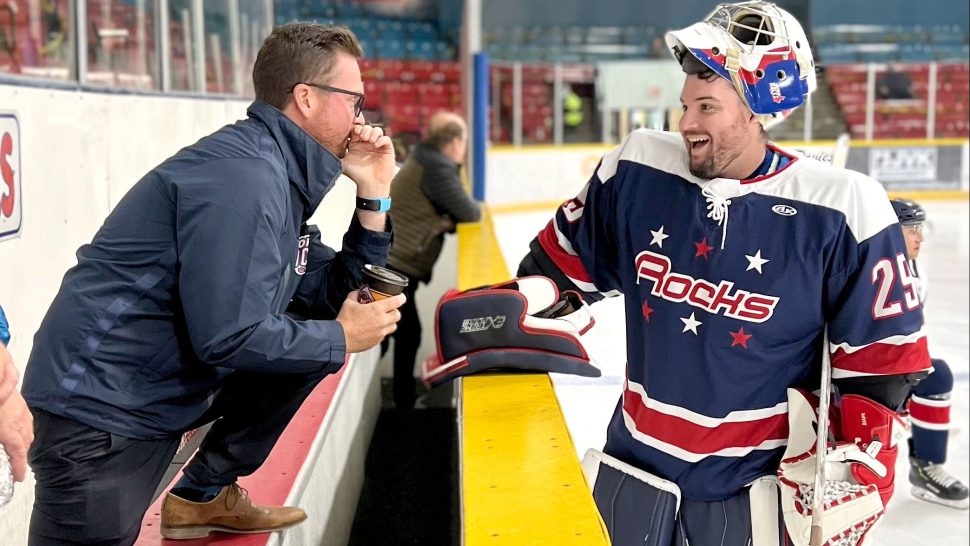 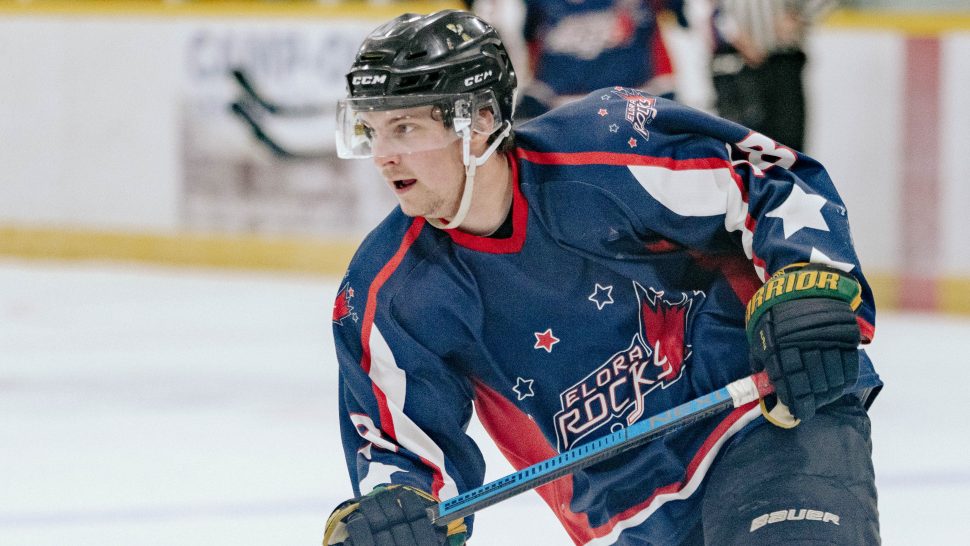 Elora resident Luke Hoelscher on the ice during a team practice. 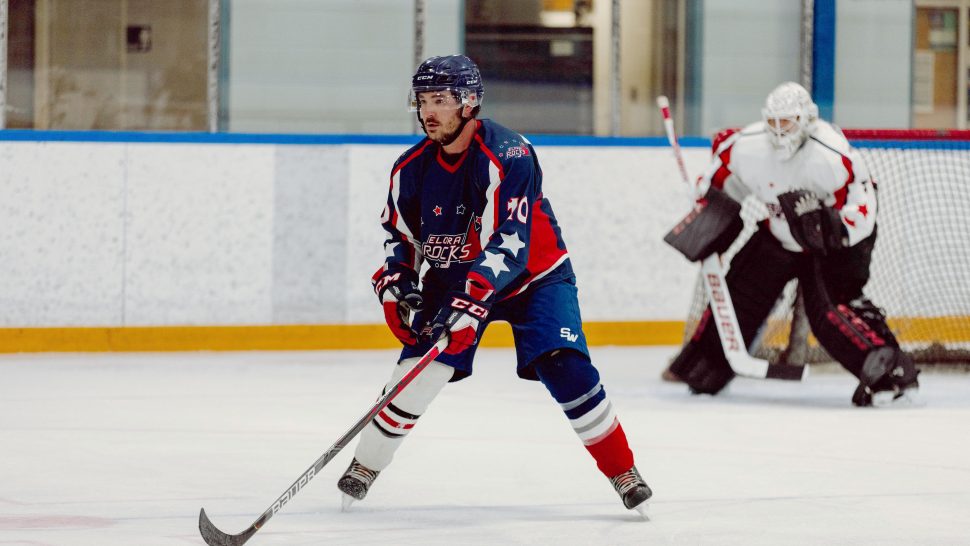 ELORA – The Elora Rocks hockey team is hosting its opener this Friday (Oct. 15), the third game of the season for the newly-revived team.

It also has a new general manager, Mitch Scott, and a new president, Rich Wigmore. Jim Boni will be the team’s head couch.

In an interview with the Advertiser, Wigmore expressed his excitement on behalf of the two new team officials.

Wigmore said they knew from the start that in order for the program to be successful they needed to have locals players on the team.

And they achieved just that.

Many of the team’s players have experience in Junior B, Junior A, the Ontario Hockey League, youth sports and even professional leagues.

“We’ve already had two games so far and we’ve won both of them and now we’re going into our third game which is our home opener against a team we’ve already beat so we’re pretty excited to play them again,” said Wigmore.

The home opener is at 8:30pm at the Elora Community Centre against the Stratford Fighting Irish. Centre Wellington Mayor Kelly Linton will drop the puck for the ceremonial faceoff.

“What makes the league different from other leagues is how progressive and forward thinking we are,” Wigmore said of the WOSHL.

“We’re trying to be very active in our social media, trying to live stream all of our games, trying to make all our games more of an event instead of just a hockey game.”

Wigmore said Friday’s game will feature a live singer for O’Canada, in addition to food, drinks and live music.

Wigmore said one of team’s top priorities is ensuring it is actively embedded within the community.

“One thing I have been whole heartedly overwhelmed with is the support from sponsors in town and other local businesses,” especially during the pandemic.

Wigmore said the team has had so many sponsors looking to be involved “it’s mind blowing.

“It just shows that the community has built such a strong organization in the past and they really want to see it be successful and bring back what it used to be years ago.”

He added Friday night home games used to be a staple for many in town and that’s what the Rocks will be trying to recreate.

Asked what he’s most looking forward to, Wigmore said for him, it’s bringing the Elora Rocks back to what they were years ago.

“Many years ago, they had a very successful organization and to nobody’s fault it had seemed to lose interest and support and we’re trying to build that back up,” he said.

“So I’m really excited to kind of see the direction the team is going and with the product that we have put together. I know that we’re going to have a winning team.”

Wigmore said a big part of the excitement for him is the team dynamic.

“When I walk in the dressing room, everybody’s already a friend or they know each other, or they played on teams together,” he explained.

“It’s like all the leg work of trying to make a team gel that normally comes mid-season into playoffs is already there.

“The camaraderie and the family feel is already there, and I think win or lose that was kind of the goal is to create something special and I can already feel that energy.”

Wigmore said he can already tell the league will be exciting.

“It’s different,” he noted. “There’s definitely something new and exciting and people are going to want to be a part of it.”

With the arena now able to offer 100 per cent capacity, Wigmore said the team is expecting a few hundred fans at Friday’s game.

“We participated in two other teams’ home openers and they had limits, but even though they had limits, they still almost sold out and that doesn’t happen in senior hockey this early in the season,” he said.

“So seeing other teams do it gives us a lot of hope knowing that people are receptive to knowing they’re in a new league and its exciting and they want to come out and see us.”