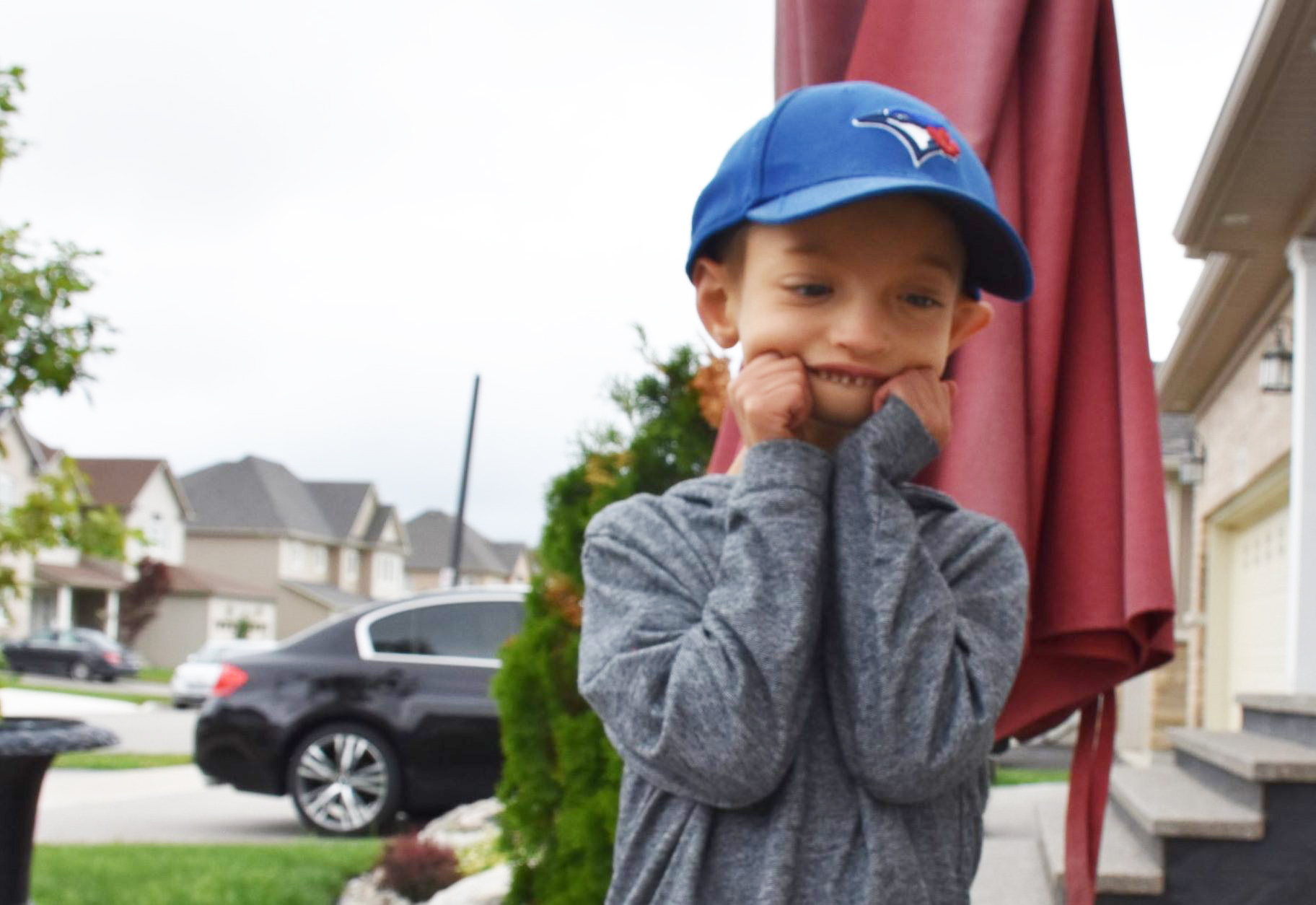 Eight-year-old Colton Timbers of Fergus has been granted a wish from the Wish Fund for Children. Photo by Joanne Shuttleworth

But when Colton Timbers takes the hand of a visitor and invites her to dance with him on the front step of his Fergus home, there’s no resisting his charms.

That little hand, light as a feather, leaves a lasting imprint.

“Colton does make an imprint on my heart also, as do all of our 74 Wish Kids,” said Sharon Rice in an interview.

Rice is executive director of the Guelph Wish Fund for Children, an organization that provides “wishes” and support to children under the age of 19 residing in Guelph or Wellington County who are living with a significant illness, life-altering injury or a rare and debilitating syndrome.

Colton has Wolf-Hirschhorn syndrome, which is the partial deletion of the fourth chromosome. It displays differently for different children, but for eight-year-old Colton, it means he’s tiny, has low muscle tone, is non-verbal and is prone to seizures.

The Wellington Advertiser reported on Colton four years ago when students at Salem Public School sold Rice Krispy squares and play dough to raise funds for a wheelchair for Colton.

Now he’s been granted a wish from the Guelph Wish Fund.

“We don’t know the wish yet,” Colton’s mother Natalie Timbers said. “We’re waiting for him to tell us. We will probably try Disney World, but it’s not the time to travel and he’s only just starting to let us know what he’s interested in. We don’t want to waste this wish.”

Right now, Colton loves buses. And ants. And dancing. And books. And making funning faces. And being with people. 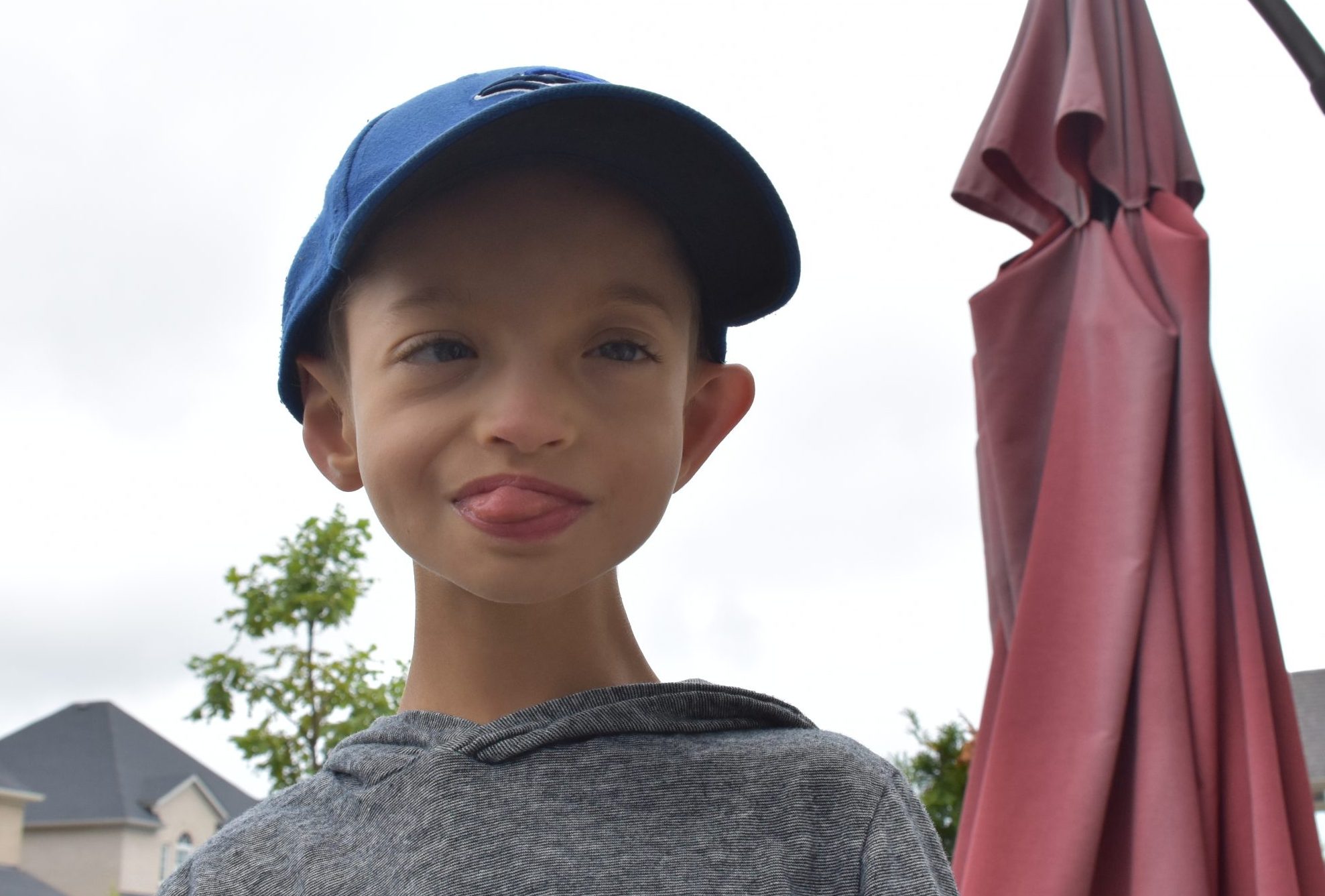 “It’s been a hard year,” Timbers said. “Colton loves being around people and of course, there’s been none of that this year.”

When schools closed, Colton would receive 20 minutes a day of online learning with his teacher and educational assistant, “and he was so happy to see them. But he would meltdown for 40 minutes when they had to leave. We tried so hard but stopped in April,” Timbers said.

Timbers said when she was pregnant with Colton, she had no indication something was wrong with her baby. But shortly after his birth, he was taken to Sick Kids hospital where Wolf-Hirschhorn syndrome was diagnosed.

“I had to Google it – it’s so rare,” she said. “His life expectancy was two years. And then we were told he would never walk. He started walking in 2018. He’s defied the odds.”

Still, his health is fragile and his future uncertain.

“I don’t know what his life will be like a couple of years from now,” Timbers said. “Medical equipment is so expensive.

“But he’s so smart. He’s understands so well. He has no words but he’s a great communicator.”

Colton can say “mama,” “bubba” (for Daddy), and “brabra” (for brother). He knows a bit of sign language and has a communication device, although because he can only point with his thumbs, he often presses the wrong buttons, much to his frustration.

Rice said there’s no pressure for wish families to make their decision in a hurry. Each candidate goes through an intake process and if they qualify, a wish fund of $10,000 is established in that child’s name.

“Families can draw from the fund for a wish or medical support or equipment or whatever they need until the child is 19,” Rice said.

“Then we close the fund. If they drain the fund? – I encourage that.”

The Guelph Wish Fund was started in 1984 by former NHL referee Ron Asselstine and Guelph Mercury reporter Alan Ferris and is funded through donations and a few fundraising events throughout the year.

“That’s a huge leap and we are so grateful for the financial support – especially as we haven’t been able to hold our fundraisers,” Rice said.

Families have been able to access their accounts however, and Rice said there have been a lot of requests for play equipment and computers during the pandemic. And one girl is getting a bedroom makeover.

For information about the Guelph Wish Fund for Children, how to donate, and how to make a referral, visit guelphwishfund.com.