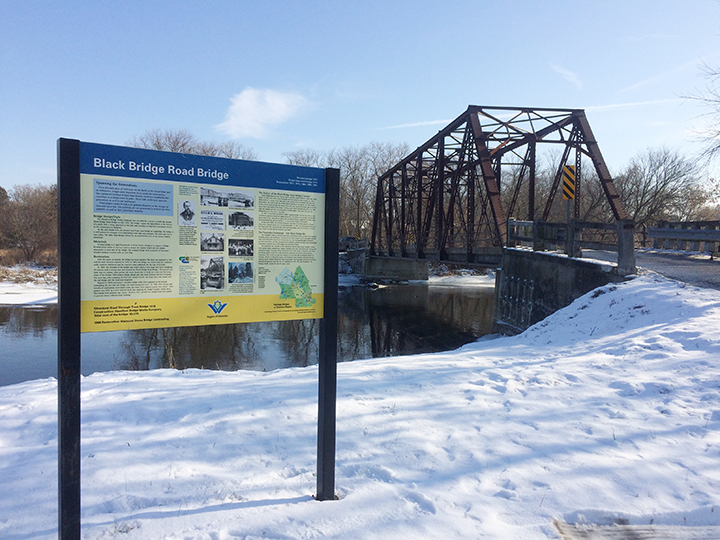 ABERFOYLE – The historic Black Bridge Road bridge will remain part of the local community – as part of a multi-use trail.

Vehicle traffic will move to a new bridge crossing the Speed River slightly upstream from the original location.

The current bridge lies near the border of Puslinch Township and the City of Cambridge.

MacDonald explained the city completed an environmental assessment a few years ago and now the project is at the preliminary design stage.

BT Engineering president Steve Taylor said the project has been ongoing with his firm since 2011. He added there are a few items Puslinch council needs to decide to move forward.

Taylor noted there are currently load limits on the one-lane bridge.

Taylor noted the existing steel truss structure would be retained as part of a multi-use path.

The preliminary design included meetings with all land owners where property was considered necessary and small widening plans were negotiated. The majority of necessary property acquisition comes from agricultural lands and does not impact residential properties.

The proposed land transfer requests the unopened road allowance north of Roszell Road and Black Bridge Road be transferred or recognized to be owned by Cambridge.

Currently, the unopened road allowance is identified on title as owned by the authority with jurisdiction.

If registered to the city, it would allow that municipality to consider its use in negotiations with the owner at 1000 Black Bridge Road, who is currently using the land for a driveway.

A previous council resolution identified that any requirement for private lands would be considered during the detail design.

Taylor said the preliminary design and report will be presented at a public information centre in January.

Cambridge representatives said they would keep the township informed of the progress through detail design and construction.

They will also provide a  summary report of the public comments received.

Possibly the biggest change for some residents would be the switch of the Townline Road, Black Bridge Road and Roszell Road to a three-way stop.

The existing intersection of Black Bridge Road/Roszell Road and Townline Road is a T-intersection with stops  on two approaches (northbound and eastbound), while the westbound approach (Roszell Road) has the right of way.

– the warrants for provision of an all-way stop are to soon be satisfied; and

– an all-way stop would be required as an interim measure to implement other possible changes to the current configuration of intersection.

An all-way stop would require a bylaw to place a stop sign on Roszell Road, controlled by Puslinch.

Taylor again stated “we are very close to having a public information session in the new year.”

Mayor James Seeley asked if the city had plans for the unused portion of Townline Road north of Roszell Road. Taylor said the city has no additional plans.

Council received the presentation and also moved forward on converting the intersection of Roszell Road, Black Bridge Road and Townline Road to a three-way stop.