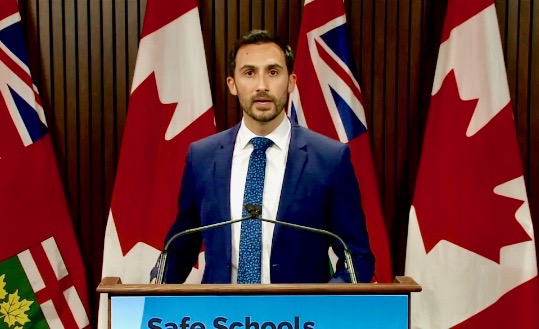 TORONTO – In a school year plagued by near-constant upheaval, students and education workers have been served with yet another major change: a one-month postponement of their annual winter break.

On Feb. 11 education minister Stephen Lecce announced March break, scheduled for March 15 to 19, would be put off until the week of April 12 to 16.

“Delaying March break, not cancelling it, is an important way that schools can help to limit community transmission,” Lecce stated during the press conference.

He explained the decision, based on advice of public health officials, will help “limit opportunities for congregation – while reaffirming the evidence that schools are safe for students.”

The minister noted the province does not want to see a repeat of behaviours that occurred over the Christmas holidays, which led to a spike in COVID-19 cases across the province.

“It is critical we follow public health advice to protect schools and avoid a repeat of the concerning spike in youth-related cases over the winter break, when students and staff were out of schools for a prolonged period of time,” Lecce stated.

He added delaying March break “also limits any further disruptions to students” during a difficult year.

Lecce also reminded residents not to travel at this time, “particularly given the increase in new variants that pose a direct risk to our country.”

He asked Ontarians to “stay at home as much as possible and continue following the direction of public health officials so that we can keep schools open and protect our seniors, frontline health workers and all families.”

Shortly after Lecce’s announcement, the province’s four major teachers’ unions issued a joint press release stating the postponement of March Break is not in the best interest of students, teachers, education works and families.

“These are unprecedented times, and this is a much-needed break for students, teachers, education workers, and families who have been under tremendous pressure throughout the COVID-19 pandemic.

“The government’s decision to postpone March Break does not take into consideration the mental health and well-being of those involved.”

Union officials say if there is a concern about people travelling during March Break, those concerns should be addressed by the government through other means.

“Their decision to postpone, despite unanimous opposition from unions representing educators and other stakeholders in the sector, including all school board associations and the Ontario Principals’ Council, is another example of this government ignoring experts and making decisions that are reckless and baseless,” the release states.

“This decision demonstrates their lack of understanding about the stress and pressures of learning and working in a pandemic.

“Teachers and education workers have gone to extraordinary lengths to teach and support students every day since the start of the school year, whether in person or online. Their efforts should be applauded not diminished.”

-With files from Mike Wilson