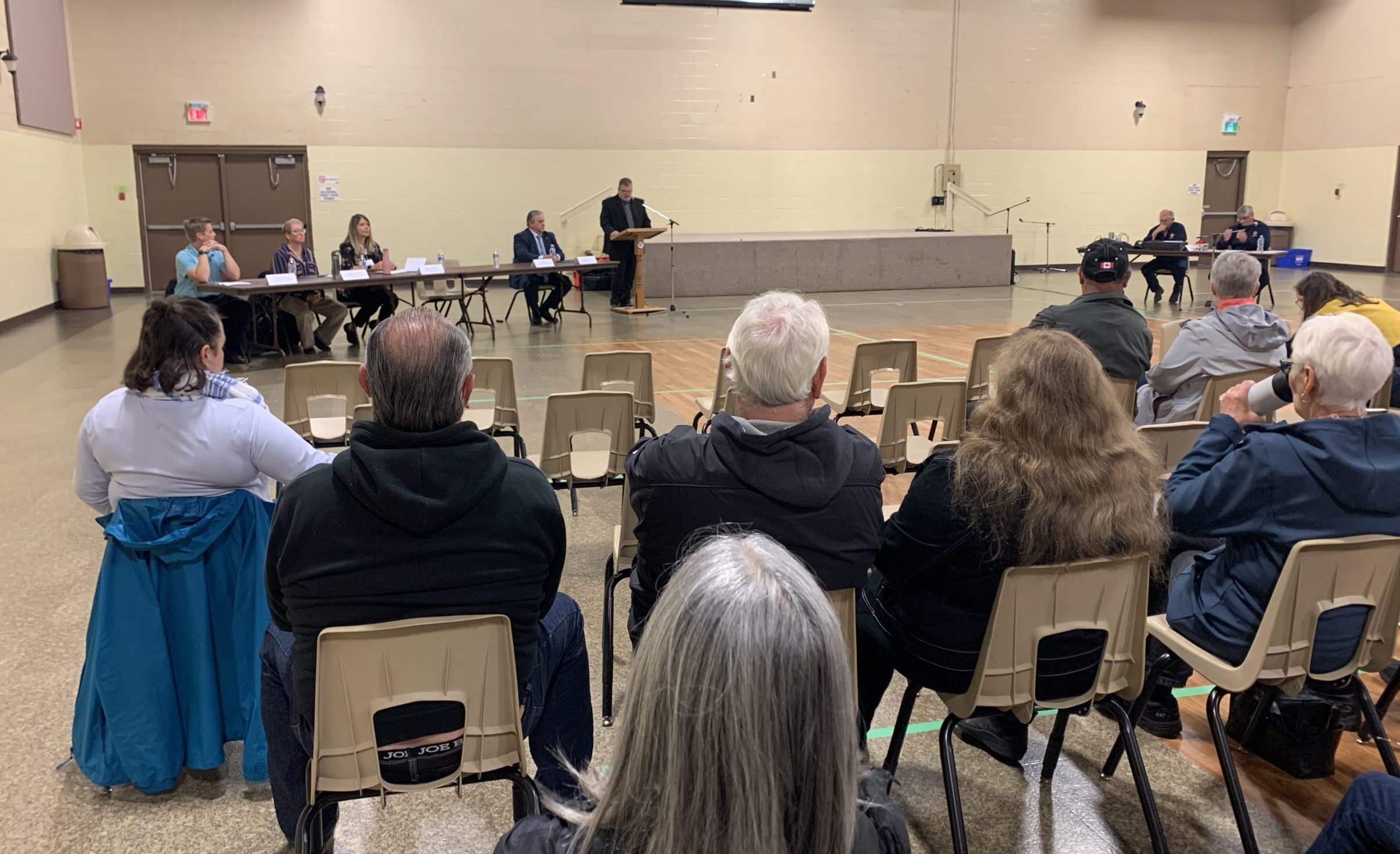 Wellington North mayoral candidate Dan Yake responds to questions during an all-candidates meeting at the Arthur and Area Community Centre on Sept. 27. Photo by Jordan Snobelen

ARTHUR – The fire department, streetscaping, derelict buildings, garbage collection, the Arthur public works building, speeding and a proposed outdoor pool in Mount Forest were just some of the topics addressed at an “all-candidates” night held at the Arthur and Area Community Centre on Sept. 27.

The night began with school trustee and mayoral candidates chatting with electors in the gymnasium of the community centre. There were no council candidates, including three in the running for Ward 1, who participated in the event.

Current mayor Andy Lennox and Ward 1 councillor Dan Yake, who are both in the running for the mayor’s seat, chatted amicably with each other and joked together before the question and answer event began.

Arthur Lions Club members, who hosted and moderated the event, posed questions submitted in writing, and ensured those posing questions at the mic and the candidates responding were kept within their allotted time—30 seconds to ask the question, and a minute to respond.

Following candidate introductions, none of the roughly 40 people seated in the gymnasium jumped to the mic and the first two questions of the night—concerning shared fire services—were read by Lions Club member Phil Wilman.

Is the shared fire service between Minto and Wellington North saving money?

Yake took the plunge, saying the township is large enough for its own dedicated fire chief and service, and added, “I don’t think we are saving the money that we thought we would.”

Lennox said the goal of shared service was not to save money; though he believes there have been savings. The goal, he said, has been to share expertise and increase group purchasing power.

Both Lennox and Yake acknowledged there are certainly some department volunteers who are dissatisfied with the arrangement.

Lennox called it a “challenging environment” and Yake said “the morale of both departments is down.”

Three candidates for trustee in the Upper Grand District School Board (UGDSB) were next up to the mic, responding to a question about violence in the classroom and what trustees could do. (Trustee candidate Daniel Kelly was absent from the debate.)

Robin Ross, candidate and current UGDSB trustee representing north Wellington, said violence in classrooms across the province is a concern.

However, she explained trustees serve a narrowly defined role.

“The only way you can advocate is with system problems,” Ross said, not for individuals.

“I have to find a system problem, and at that point, I can be an advocate.”

UGDSB trustee candidate Natalie Breau said she would want to understand more about what is happening in the classroom and proceed as best she could, even if that only meant interpreting the Education Act or making connections with people better suited to address the issue.

Although follow-up questions at the mic were permitted, there was none for the trustee candidates.

Two people asked questions about how the township was dealing with derelict buildings, specifically a unit immediately adjacent to the east of the TD bank in downtown Mount Forest, and about property standards for unmaintained properties in the township.

Answers ranged from talk of complicated legal and engineering processes (in the case of the building beside the bank) to involving the township’s contracted bylaw service, provided by the City of Guelph.

Another resident asked why Wells Street East, ending at Domville Street, was not being connected to Wellington Road 14.

Both Lennox and Yake empathized with how long the opening of Wells Street has been a topic of conversation, but said it could not be opened until there is servicing and development.

“When the time comes and the time is right,” Yake said, it could be opened and become a thoroughfare.

A submitted written question asked, “Will Arthur residents have to pay for the new pool in Mount Forest, and what percentage of the cost?”

Both candidates said the township isn’t viewed by council as though it were divided between Arthur and Mount Forest but rather a whole community.

A cost hasn’t been determined. As the Advertiser reported this month, a basic design iteration of the pool has gone out for a market pricing assessment to gain a feel for accurate costing for the pool.

Regardless, Lennox said the price of the pool is higher than expected and “we’re struggling to try and figure out what we can [do] and how we can pay for it.”

Lennox added it wasn’t feasible for taxpayers to bear the entire burden of whatever the cost ends up being, and supplemental ways of funding the project are being explored.

A rambling question from a resident asking the mayoral candidates to expand on the township’s fire service arrangement required a moderator to cut off the mic.

Yake said a complete review is needed – and this point of needing a fulsome service review, not just of the fire service, but of all township services, was repeated by the candidate several times throughout the night.

Lennox reiterated points on the service made earlier at the event. 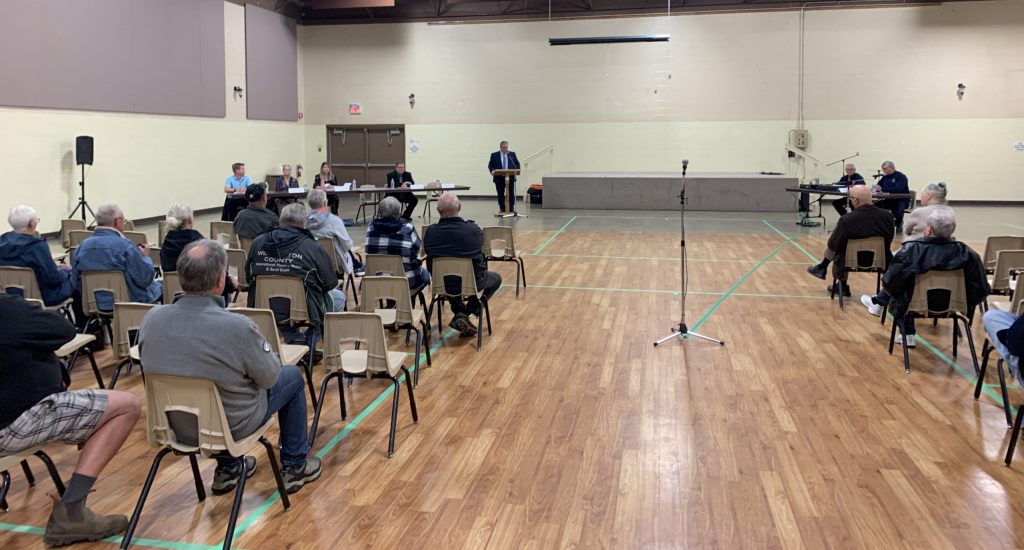 Wellington North mayoral candidate Andy Lennox responds to questions during an all-candidates meeting at the Arthur and Area Community Centre on Sept. 27. Photo by Jordan Snobelen

Many of the questions asked were directed at the mayoral candidates, such as one asking the Lennox and Yake to peer into the future and suppose what might be highest on the priority list.

Lennox said there was no way he could address specifics with the time allotted but said there were big changes coming down from the province.

Yake said local leaders need to ensure the county is looking after the services provided to the township.

One question was about the county’s COVID-19 vaccine requirement of staff and volunteers – and when it would end.

Someone remarked it was a county issue.

Yake said he didn’t have an answer for county policy, but said “it’s a sign of the times” that employers require staff to be vaccinated.

In his remarks, he didn’t side for or against mandated vaccination, and deferred to the county’s judgement.

Lennox also had no idea when/if a mandate would end, and said “vaccination is still very important for the workforce.”

The only question posed to all candidates asked where there was room from improvement within each candidate’s circle of influence.

Growth and development of the community, safety and quality of life, council engagement within the community, and the environment were key points for Yake.

Lennox said rapid community growth and public participation were important and he called for increased public consultation and engagement.

“I don’t have all the answers … but if we’re going to get the best results for our community, it really requires us all to put our heads together,” Lennox said.

Greer said a school board trustee can’t just sit idly by; knowing what is important for people is key. His passion he said, is improving communication.

Mental health for teachers and students were the choices for Breau, who said she doesn’t believe parents are involved enough in their children’s education—from what she has heard.

Ross didn’t directly answer the question, but plugged an Oct. 12 North Wellington Hub meeting, essentially suggesting public participation helps to determine what’s a priority within an open forum where ideas can be shared.

An hour into the night, all written questions had been answered, but more continued being posed at the mic.

A recent situation at the Oakville Trafalgar High School involving a transgender educator who wore large, prosthetic breasts in the classroom was brought up, and trustee candidates were asked how they would respond should a similar situation arise here.

Some in the room weren’t aware of video and photos shared on social media or the recent uproar, and Ross recapped what was going on for those in the gymnasium before explaining that she would be limited within a trustee’s scope.

“I can only work within the very tightly defined role, and that is not a very powerful one, so you can see from the protests that parents have a lot more power to change things than the trustee does, because I have to work within the system,” Ross said.

Greer said he would try to ensure all had a chance to speak and make connections with the right people.

Breau said she wouldn’t be able to do much, but would ensure voices are heard.

Similar answers were given in response to a question about how bullying would be addressed in the classroom, but Ross said “it has to be more of a society discussion.”

“Because that’s how we’re going to solve the problem,” she said.

“It’s not going to be me as trustee that solves this; it’s going to be kids learning how to protect themselves.”

A question about the frequency of snow ploughs on side roads had Yake returning to his determination for a full review of services offered.

Lennox said local service levels are already higher than surrounding municipalities, but levels can be reviewed.

A Lions Club member asked about what the township was doing to promote and attract business, adding anecdotally that he notices more business promotion coming from Minto compared to Wellington North.

Lennox agreed there is more activity coming from Minto, which is why the township’s economic development arm has partnered with Minto and Mapleton to drive business promotion.

However, Lennox said, the issue of attracting businesses comes down to having housing available for employees.

Yake said council needs to work with local businesses to create an atmosphere business operators want to be a part of.

“I mean it’s not really the municipality’s role, I guess, to go out and try and attract Walmart or Giant Tiger or whatever the case may be,” Yake said.

“But if we provide the atmosphere here and conditions are right for them to come here, then they will come here.”

At 7:30pm, ahead of the two-hours scheduled for the event, there were no further questions and Wilman thanked everyone for attending.

There was a short, genuine round of applause before some residents left and others mingled with the candidates while snacking on cookies and coffee provided.