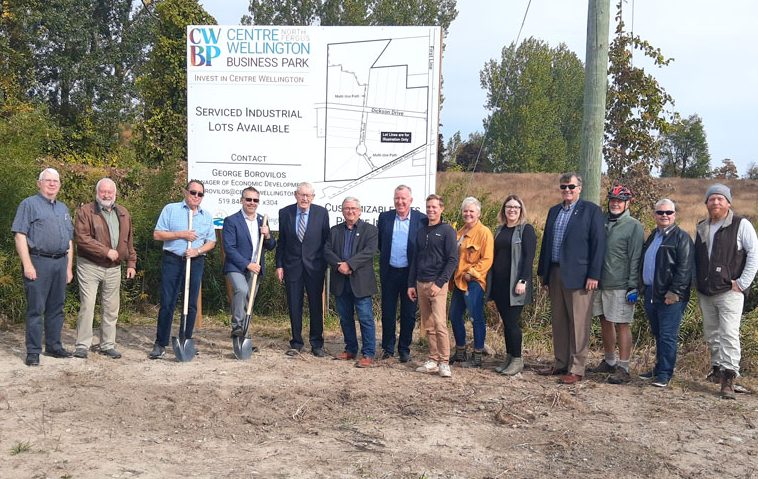 The mayor, councillors and members of the economic development task force gathered for a photo at the groundbreaking of the Fergus North Business Park on Oct. 6. Photo by Joanne Shuttleworth

FERGUS – Centre Wellington staff, council and the economic development task force gathered at the end of Dickson Drive on Oct. 6 to break ground on the new Fergus North Business Park.

The township has purchased 58 acres of land for its first business park.

The parcels of land will be ready for sale in early 2023 after planning, zoning and servicing is completed on the site.

Manager of economic development George Borovilos said the project for servicing and roads is almost ready to go to tender.

He noted there has been pent-up demand for an industrial park for years and since the township purchased the land and announced its intention to open a business park, there has been great interest.

Mayor Kelly Linton said from 1999 to 2014, council of the day would not move forward on the idea of purchasing land for an industrial park.

“They passed up opportunities to purchase land and we would lose jobs to neighbouring municipalities,” he said. 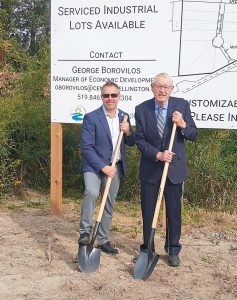 Mayor Kelly Linton and former Mayor Jim Gibbons strike a pose at the groundbreaking for the new business park on Dickson Drive in Fergus on Oct. 6. Photo by Joanne Shuttleworth

When Linton first ran for mayor, he campaigned on this initiative and once in the seat, formed the economic development task force that included local businesspeople.

“Instead of complaining about the township, we invited them to help us do better,” Linton said.

Linton explained the business park will have paved streets, a protected forest and will link with the nearby trail system.

The historic farmhouse on the property will be preserved and there will be attractive entrances on Dickson Drive and 1st Line, he added.

Linton said opening the business park sends the message that Centre Wellington is “open for business.”

“And not a dime of taxpayer money will be used for the business park,” the mayor said.

“In fact, it will be a revenue generator.”

Former Fergus mayor Jim Gibbons said the idea of a business park goes back to the 1970s and while he lobbied for one, it was always a tough sell.

“People thought economic development would happen by private enterprise, but instead property was bought up for housing,” he said.

Anyone interested in purchasing a plot of land in the business park can contact Borovilos at 519-846-9691 ext. 904 or gborovilos@centrewellington.ca.