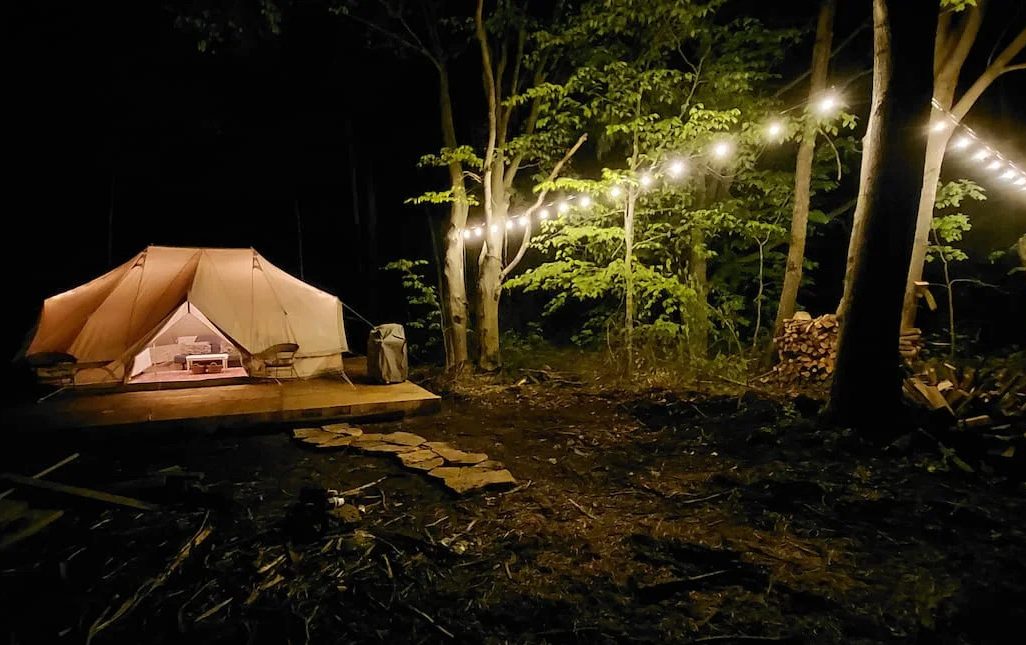 Provincial policy dictating how agricultural land is used in Ontario allows for secondary on-farm uses, but local land use policy and zoning bylaws can get in the way, preventing farmers from diversifying on-farm income sources. This image shows the glamping tent and site at the Pfisterer Farm. Submitted photo

WELLINGTON NORTH – There’s just something about being out on the farm.

Perhaps it’s the fresh air, the quiet, the open space or being out on the land that draws urbanites from the concrete jungles and the neon-soaked skylines of the GTA to the Pfisterers’ farm in Wellington County.

“For a lot of people it’s such a novelty to come out to see how we live and the animals,” said Jess Pfisterer, farmer and co-owner of Pfisterer Farm with her husband, Ryan.

When the pandemic made staycations a thing, forcing Ontarians to explore their own backyard, provincial parks became, in Jess’ words, “totally overrun.”

“So we thought, ‘Why not open an AirBnB type thing on the farm?’”

The Pfisterers farm 100 acres of land in northern Wellington County, near Kenilworth, where they grow and retail their livestock, including chickens, turkeys and pigs.

But like many young farmers, they also work off-farm jobs to pay the bills and raise their family.

Making a living on land their size, Jess says, is “very difficult.”

They are limited in how much they can produce and how quickly, so commodities of scale don’t work here. And with a smaller scale, their bulk input costs are also higher.

“I think that there is a market, but I think you have to be realistic when you’re looking at a business like ours and what can you do to fill the gaps,” she said.

For the Pfisterers, the gaps can be filled by agrotourism, or what’s known in planning circles as “on-farm diversified uses.”

The couple took the idea to rent out a glamping tent on their property to Wellington North for approval and the township was agreeable and charged no fees.

“Which was great,” Jess remarked, saying the township was supportive of the idea.

The tent came from Belgium, brush and debris were cleared from the land, a toilet installed, and insurance waivers drawn up.

In 2020, the on-farm glamping experience was ready, and within 48 hours it was fully-booked for the summer.

“I was so overwhelmed,” Jess said.

While staying two to four nights on the farm, visitors would purchase the Pfisterers’ products to cook and eat.

“It turned out to be really successful for us, and obviously another revenue-generating avenue,” said Jess.

She estimates there were roughly 75 families who stayed at the farm between May and September of 2020.

“It doesn’t seem like a lot, but if those 75 groups happen to stop in at a few other local businesses along the way, it’s helping the whole local economy,” Jess added.

But since then, the Pfisterers have run up against local land use policy when it comes to expanding their agro-tourism business.

This year, the couple wanted to erect a grain bin, converted for year-round stays, on a second plot of land.

Case by case, staff exercise their judgment, looking to the next closest thing on the books: home industry and occupation allowances.

But Jones said the conversion of a grain bin didn’t fit into any agricultural land uses and the idea was rejected with a “hard ‘no.’”

Agricultural-specific rules on the books deal only with the sort of stuff that comes to mind when you think of farming: barns, fencing, manure pits and the like.

“There’s [a] lag from the province, to the county, to the township. So on-farm diversified uses just haven’t picked up in zoning bylaws yet,” Jones explained.

Wellington County is currently examining its official plan, and Jones said once the review wraps up, the township could begin exploring its zoning bylaw.

There is no uniform approach to how each of the county’s seven municipalities handle diversified uses on agriculture land.

For example, in 2021, Erin amended its zoning bylaw to include on-farm diversified uses as a right on agricultural properties, subject to site plan approvals.

“As a farmer, that’s frustrating to know that my neighbours, which are not very far from me … are allowed to do very different things than what we’re allowed,” Jess said of the policy patchwork.

“I think the real issue is that this kind of agro-tourism, value-add stuff, it’s far ahead of its time from where the policies are [and] the policies just haven’t caught up.”

In 2020, the Ontario Ministry of Agriculture, Food and Rural Affairs (OMAFRA) funded a study, overseen by rural planning and development professor Wayne Caldwell at the University of Guelph, to find out, in part, if and how the province’s guidance was being implemented in municipalities across Ontario.

Pam Duesling, a career planner and PhD candidate who conducted research for the study, interviewed 31 municipal and provincial planning staff.

“Our research has identified only a handful of municipalities that have, as a right, on-farm diversified use policies,” she said.

Those that don’t require farmers to, at minimum, seek a zoning bylaw amendment, if not an official plan amendment, and then provide a site plan.

“Those are costly and timely processes for farmers to go through,” Duesling said.

Emily Sousa, an Ontario Federation of Agriculture land use policy analyst and student researcher on the study, interviewed farmers who expressed interest in on-farm diversification to generate additional income.

Some municipalities, such as the Region of Waterloo, where there is a large Mennonite population involved in home industries on farmland, have written on-farm diversified uses directly into their official plan and zoning bylaws.

“In that case, all a farmer would need to do is have their business plan ready to go and see whether or not that use is permitted, and just go ahead and apply for the building permit,” Sousa explained.

“The frustration is certainly there,” she said of the farmers interviewed.

When the steps aren’t so simple, asking for forgiveness can be easier than asking for permission.

“It really is unfortunate, because the idea of this policy is to provide [an] avenue for farmers to generate additional income and to stay on the farm,” Sousa said.

“But if the costs and the time [are] just so prohibitive, then we’re not actually going to be getting farmers to be taking this opportunity.”

The Advertiser talked with one farmer who declined to speak on record, but admitted to an ongoing and illegal on-farm use because of the cumbersome and cost-prohibitive steps required to follow the rules.

Another declined entirely to speak with the newspaper about their on-farm diversified use, saying the rules surrounding the use are too fussy and contentious.

Caldwell, the principal researcher of the study, spent much of his career working as a municipal planner.

He says the province’s guidelines are there to help support farmers’ entrepreneurship while ensuring farmland supports a primary goal of growing food.

“It’s about making sure that for on-farm diversified uses there’s a policy that’s supportive of them … but at the same time, realizing there are limits to what’s acceptable,” Caldwell said.

For example, among other specifics, the OMAFRA guidelines stipulate uses must be secondary to primary agriculture and restrict those uses to two per cent of the farm property to a max of 2.4 acres.

The study doesn’t officially conclude until next year, but a guidance document is being assembled and will be presented to municipalities to help planners better understand how to navigate farmers’ requests for diversified uses.

Wellington County was one of the municipalities involved in the study and will participate in a presentation of its findings.

The county is also reassessing its agricultural land use policy, including on-farm diversified uses, in consultation with an agricultural stakeholder group as it undergoes the official plan review.

“We will be developing new and updated agricultural policies,” Sarah Wilhelm, county manager of policy planning, told the Advertiser.

Wilhelm said the county wants, and needs, to align local and provincial policy to allow for more flexibility when it comes to on-farm diversified uses.

“That’s why we’re working with agricultural stakeholders to make sure that we’re going to strike the right tone and support them the way they need it,” Wilhelm said.

The stakeholder group includes the Wellington and Ontario federations of agriculture, among other local farming and soil organizations.

Proposed changes are expected within the first few months of the new year, but Wilhelm is hesitant to commit to a firm timeline as policy changes rapidly stream down from the province.

Wellington County is also part of an exclusive zoning bylaw review being completed by the Ontario Federation of Agriculture (OFA).

The OFA is covering the cost of a planner who is reviewing zoning bylaws from the county’s seven municipalities and creating a “playbook” to align bylaws with provincial planning policy.

“A lot of the issues that have been coming to the executive have been around land use and land planning,” said Wellington Federation of Agriculture (WFA) president Janet Harrop.

Of all the counties who applied, Wellington was hand picked.

“One of the reasons why Wellington was chosen was because this is an ongoing issue to have some consistency with the provincial policy statement and local planning,” Harrop explained.

The review is expected to be completed in the spring, when the county finishes its work, Harrop said.

The WFA wants local municipalities to use the playbook to guide lower-tier reviews so consistent bylaws can be implemented across the county.

The federation is hopeful for more opportunities for farmers to diversify from an economic perspective.

With October’s municipal elections soon to be buried in the snow, the Pfisterers are hoping to find out what they can do to level the playing field.

“It’s one of those things where you pick your battles and figure out where you want to put your time and your effort,” she said.

For the Pfisterers, the grain bin is about more than a side hustle.

It’s also about sharing the culture of Wellington North and the county with outsiders, Jess said.

“It all goes back to the whole premise of our business and of our farm,” she said.

“We want to connect people with where their food comes from.”