TORONTO — The Wellington-Dufferin-Guelph Public Health  (WDGPH) region will spend another week in the red zone.

The local health unit is not one of seven that will be moving to a different level of the province’s COVID-19 framework next week, which means the earliest the region could move is March 15.

Provincial officials say the framework changes, announced on March 5, were made in consultation with local medical officers of health and are based on the latest trends in public health indicators.

“While all regions have returned to the framework, everyone must remain vigilant to help prevent any further increases in transmission,” stated Dr. David Williams, Chief Medical Officer of Health.

“The best defence against the virus and all of its variants of concern remains continuing to stay at home, avoiding social gatherings, only travelling outside of your community for essential purposes, and limiting close contacts to your household or those you live with.” 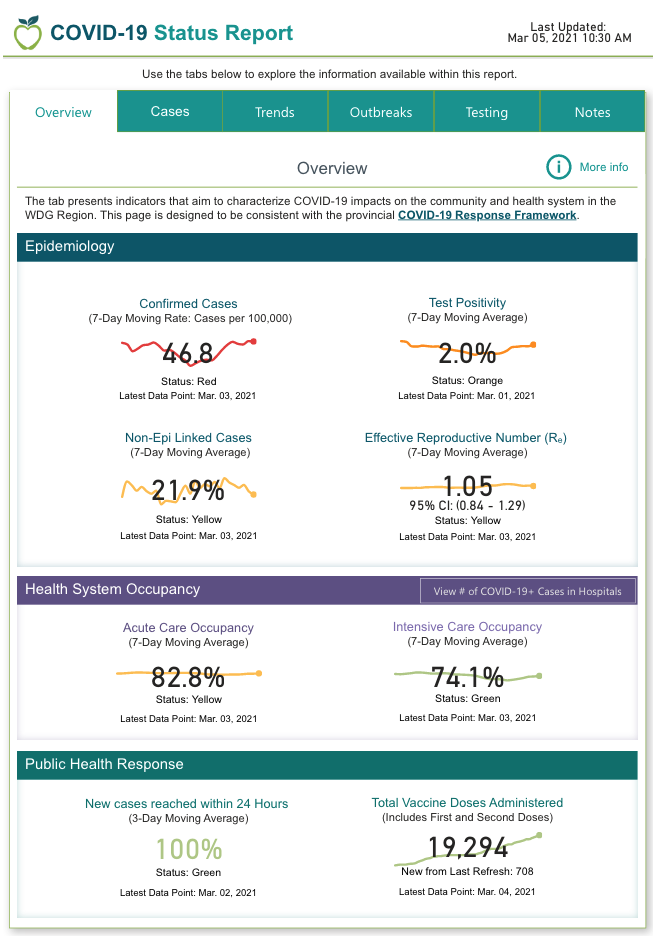 Local Medical Officer of Health Dr. Nicola Mercer told the WDGPH board on March 3 the data with the most significant impact on provincial COVID-19 alert levels are:

WDGPH indicator levels, along with active and new cases, had dropped steadily for six weeks straight following the start of the provincial lockdown on Dec. 26, but increased this week.

The province announced in early February that WDGPH would return to the red level of the pre-lockdown framework on Feb. 16.

The placement was originally to last until March 2, but it has been extended twice. The region will remain in the red zone until at least March 15.

(The province generally announces changes to the framework on Fridays, with the moves effective the following Monday or Tuesday).