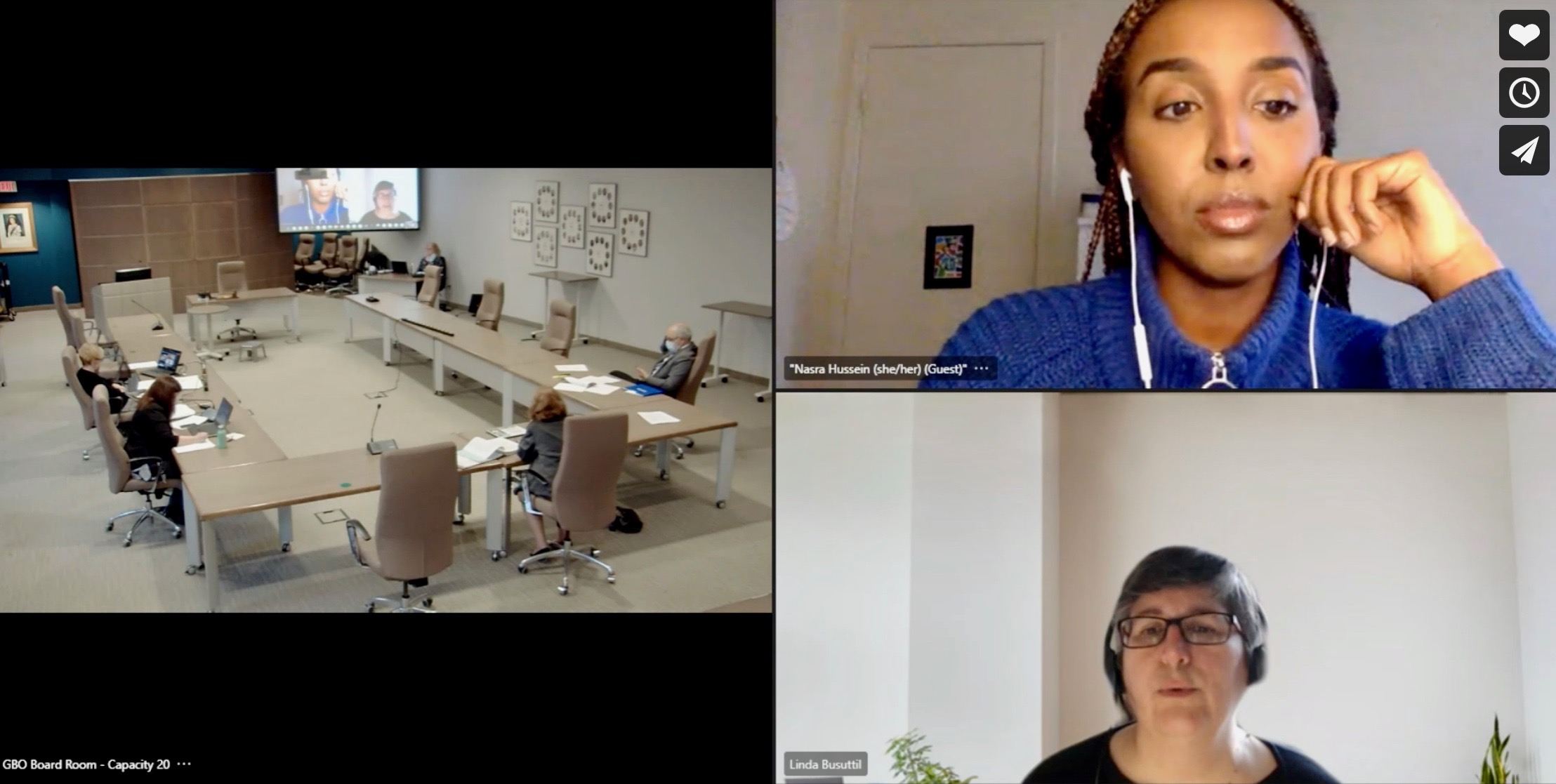 Nasra Hussein, a health equity advocate and researcher, and trustee Linda Busuttil were among those to speak at the April 27 UGDSB meeting.

GUELPH – After nearly a year of review, it’s official: police officers will no longer patrol the halls in Upper Grand schools.

In a unanimous vote, Upper Grand District School Board (UGDSB) trustees passed a motion on April 27 to remove the School Resource Officer (SRO) program from all elementary and secondary schools.

“It was a long, arduous process,” said trustee Mike Foley, a member of the Police Presence in Schools Task Force.

“We spoke to other school boards, members of different communities, experts, police and many police services.

“We reached out to so many different groups through different means and methods that I think we developed as comprehensive and idea of what the community needs and wants, as possible.”

The recommendation to discontinue the program was initially proposed at the March 23 board meeting after a detailed report was released by the Police Presence in Schools Task Force in response to concerns with police targeting BIPOC (Black, Indigenous and people of colour) students.

The motion was deferred until April 27 to give the public additional time to provide input.

“The purpose of deferring this motion was not to indicate or suggest to the community that the board was not in favour of these motions, it is to create space to have conversations around this issue,” trustee Linda Busuttil explained.

Two delegations requested the complete removal of the SRO program in UGDSB schools, introducing alternatives to replace the program and redirecting funds to other resources.

“A transformative shift and move towards healthy, equitable schools is possible,” said Nasra Hussein, a health equity advocate and researcher.

“Imagine what happens when money is divested from policing and criminalizing students. The possibilities are endless.”

The delegates also shared personal experiences with the SRO program in the UGDSB and in Toronto schools.

The issue of police presence in schools was initially discussed by the board in June 2020, following a number of emails and phone calls from community members.

In response, the Police Presence in Schools Task Force was established to review the SRO program.

“Conflict is still in our schools and in our communities and what we want are students who are well prepared to live and work in a diverse and global community and society,” Busuttil said.

The board meeting moved to discontinue police presence in schools, commending the work that has been done through the Schools Task Force program to date.

“We want to have more intense and ongoing professional development,” Busuttil explained.

“It’s important for us to a have a clear system direction from the board around the culture of restorative, alternative practices around discipline.”

In addition to the removal of the SRO program, the March 18 task force report also recommended the following:

The recommendations were created in response to community feedback via surveys, virtual meetings and discussions with the community and regular police consultations.

“It was a tremendous effort from a lot of people from everywhere,” Foley explained.

The recommendations aim to reflect an equity and human rights-based approach to working with the police services in the UGDSB, officials say.

“It’s all about evolving and it’s all about that ‘we can always do better,’ and I think that’s what we’re trying to do here,” Foley said.

Busuttil added, “I think this is an opportunity for us to take a step back, regroup and build.

“Rebuild those community partnerships, not just with the police, but with other community stakeholders and members to build a capacity in the school system and the community.”

In a statement issued on April 28, Guelph Police Service officials said they respect the board’s decision.

“We are committed to ensuring the safety of our schools and to having positive, proactive engagements with youth and our community,” reads the statement.

“We will be meeting with the UGDSB to determine how we can continue to deliver safety training along with other presentations in accordance with the board’s requests and requirements.”

Guelph Police officials say they “look forward to working collaboratively” with the board and community “to develop programs and initiatives which will allow us to best serve our diverse community.”

Wellington County OPP officials were contacted about the UGDSB decision, but did not immediately provide a comment.