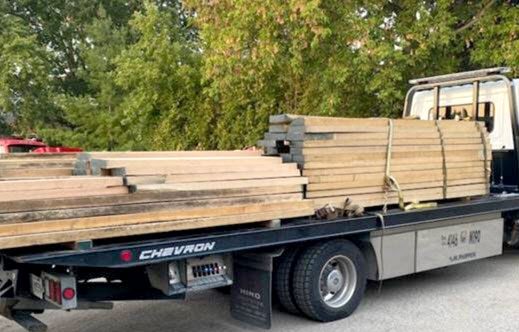 Police have charged three people after over $100,000 in lumber was fraudulently purchased from an Erin business last summer. Submitted photo

On Aug. 27, 2021, Wellington County OPP responded to a reported fraud at a business in Erin.

“The victims had sold over $100,000 in lumber, and a week later, [were] advised that the transactions had been made using fraudulent credit card information,” police stated in a March 14 press release.

“As a result of the investigation, the owners and an associate of City Stairs, Thornhill, have been charged.”

Police added that about  $80,000 worth of lumber was recovered.

Reuven Shmilov, 40, of Richmond Hill, Herzel Shmilov, 39, of Vaughan, and Ruufat Chalmiev, 40, of North York, were charged with possession of property obtained by crime over $5,000, trafficking in stolen goods over $5,000, laundering the proceeds of crime and fraud over $5,000.

All three were to appear in Guelph court at a later date.