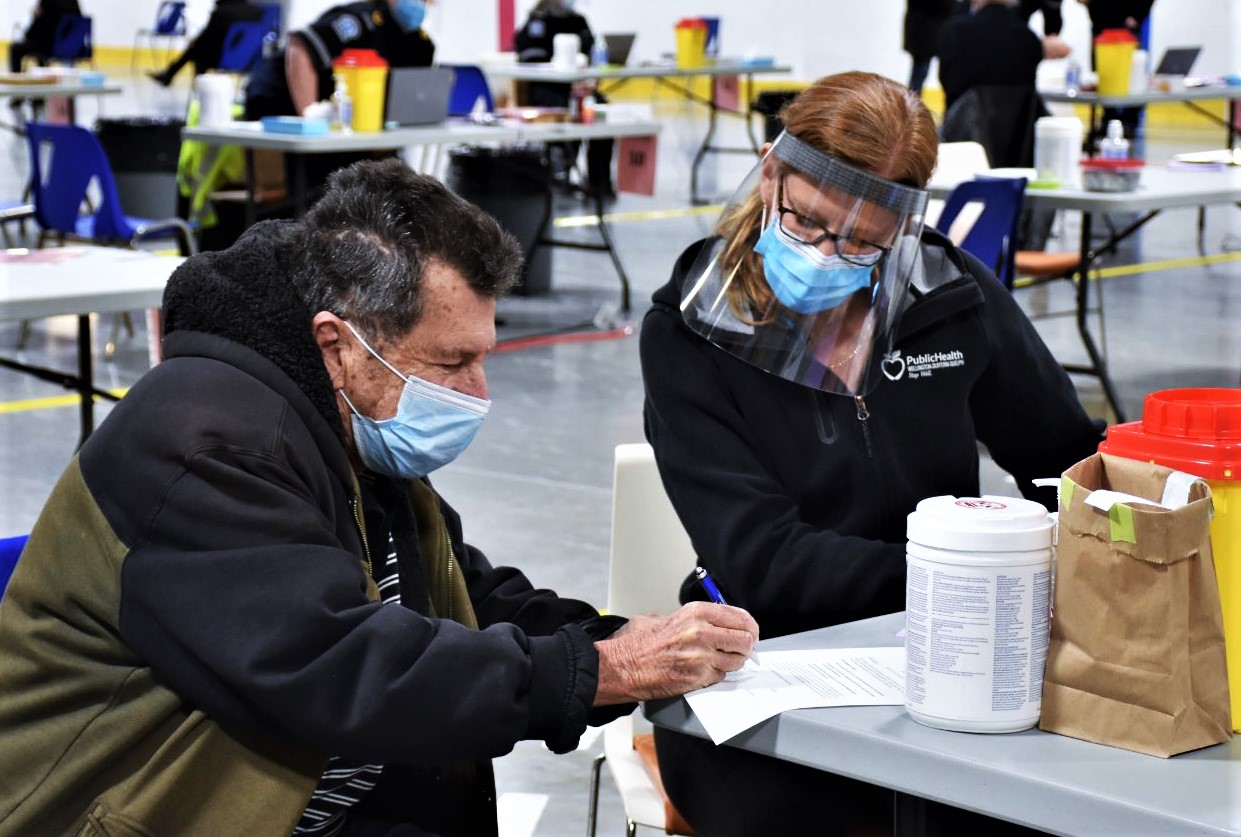 FERGUS – The vaccination centre at the Centre Wellington Community Sportsplex opened at 10am on Feb. 19 and public health anticipated inoculating 300 people that day.

And as distribution of the vaccine starts to flow again, public health says it can administer thousands of shots a day and has a plan to open stationary and mobile clinics in Guelph, Dufferin and throughout Wellington County.

“Supply (of the vaccine) is starting to move again, and we will see more clinics as we ramp up,” Williamson said.

“This is a sacrifice for (Centre Wellington) and the groups that want to use this facility. But this is the most important thing we can do.”

Goldie said the vaccination centre was set up very quickly.

“We got a call from public health two weeks ago asking if they could use the sportsplex,” Goldie said.

He explained that with a large parking lot, room indoors for people to safely spread out, and back-up generators to run the vaccine fridge in the event of a power failure, the arena is an ideal facility for such a large operation.

A week later, county and township staff had figured out how it would work, proceeded with a mock-up and public health conducted an inspection and signed off on the plan. 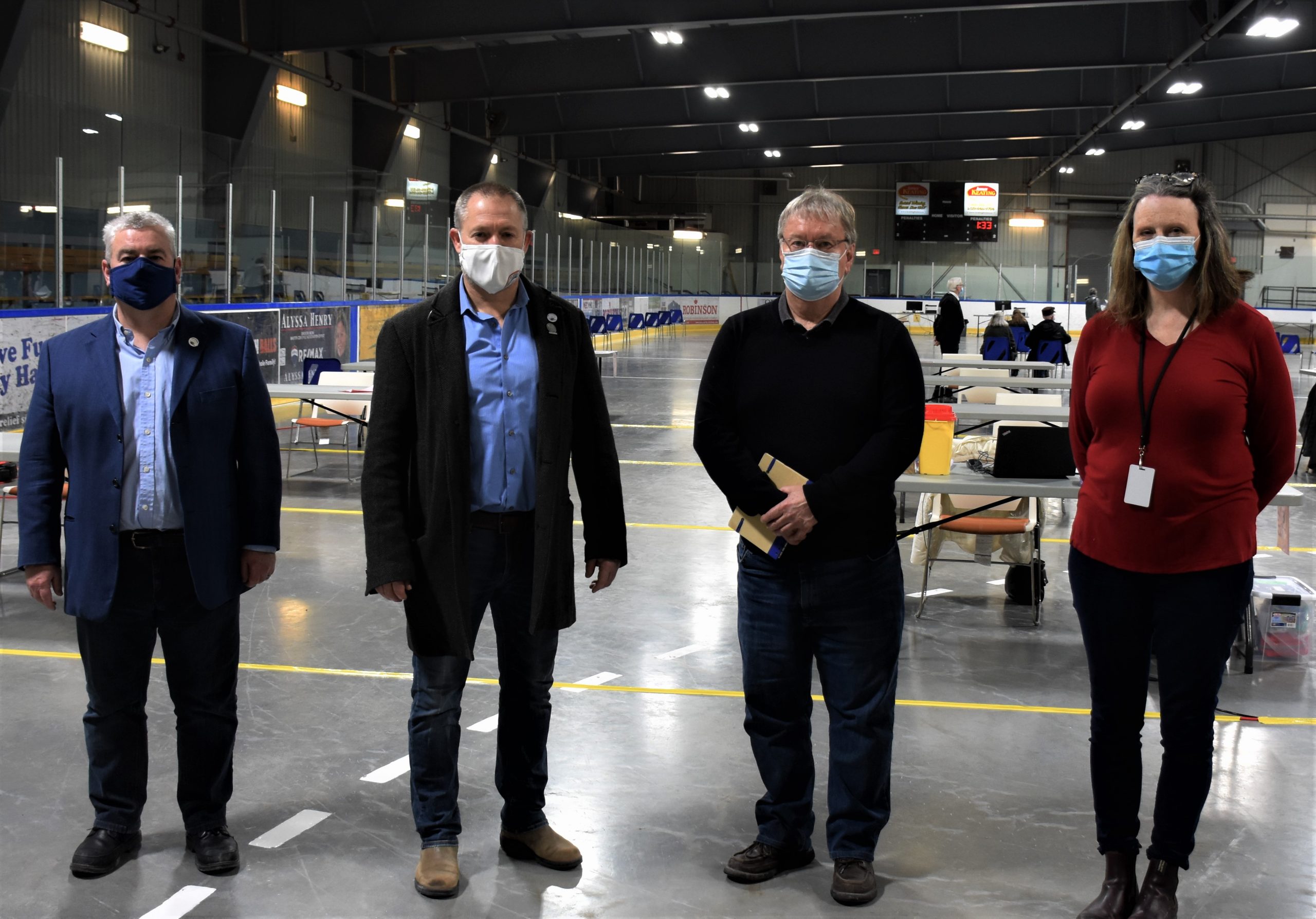 “We thought it would be sometime in March. But we got a call Tuesday (from public health) that they received another shipment, and here we are,” Goldie continued.

Goldie said he’s tracking costs and is hopeful the province will cover them at a later date.

“But this is an initiative the township and county are willing to take on,” he said.

He said there will be clinics in Mount Forest, Palmerston and Arthur for two or three-day stretches in temporary sites, likely in March or April.

And mobile clinics will begin moving through the county when there is enough supply of the vaccine.

“We want as much capacity as we can deliver, as close to home as possible,” Williamson said.

He explained WDGPH is following the province’s priority framework in terms of who gets the shot first and there will be an information blitz when it reaches the broader population.

For now, the priority is vaccinating long-term care and retirement home residents (most have received their two shots), healthcare workers, front-line workers and people over 80.

On Friday, most of the people at the Fergus sportsplex were getting their second Pfizer dose.

The ice is off Pad B and dozens of tables were set up on the rink pad. Each table had a trained public health nurse to administer shots.

Those with appointments passed a screening table by the main entrance and were instructed to follow the floor markings to the registration table.

From there they waited in a short line, and when a public health nurse was available, they were directed to that table for their shot.

From start to finish, the entire process took 15 to 20 minutes.

Constantina Mavronicolas, who is 88, learned of her appointment the morning of Feb. 19 and received her shot that afternoon. 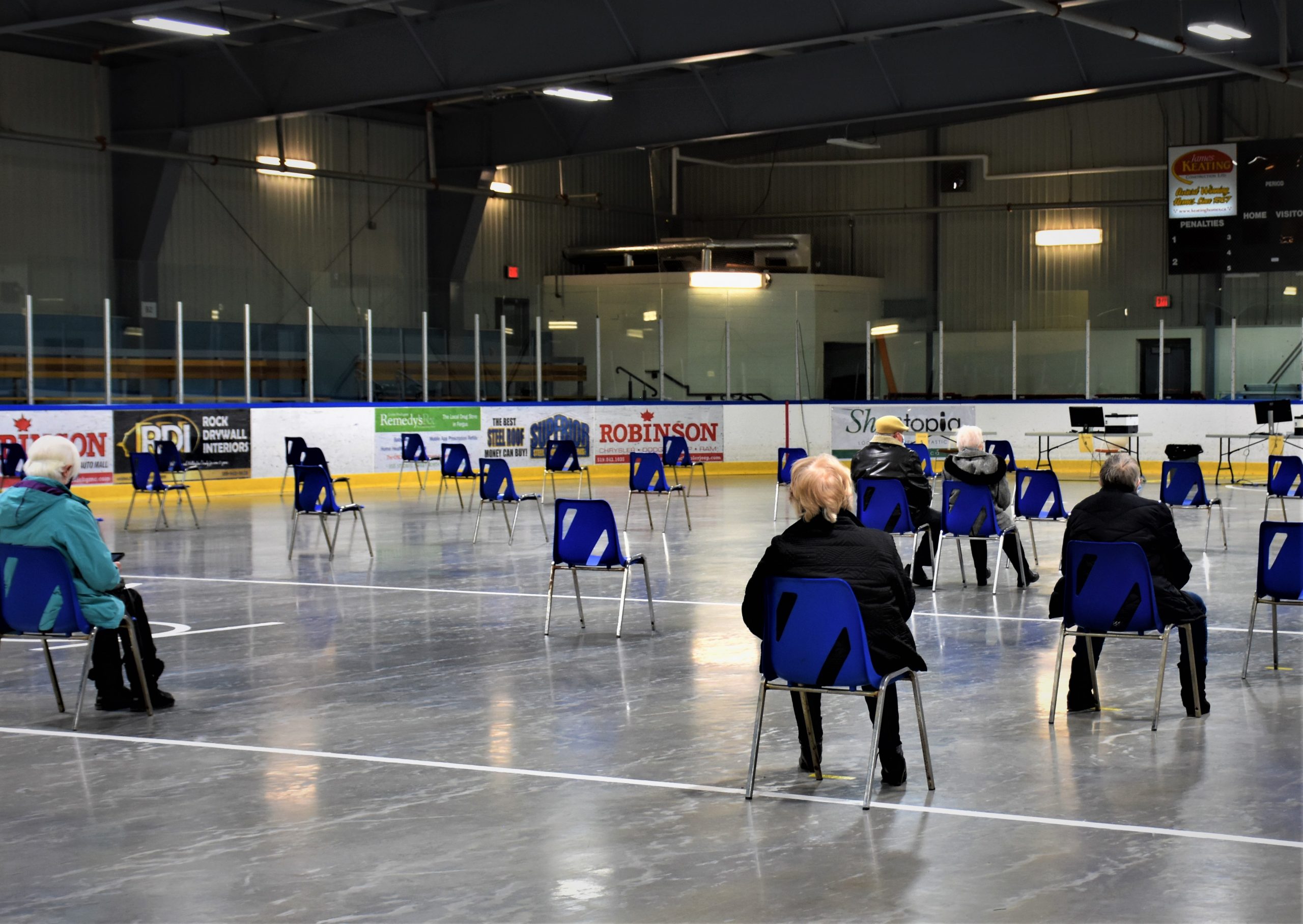 Recipients wait to receive their COVID-19 vaccination on the opening day of the clinic at the Fergus sportsplex on Feb. 19.
Photo by Lori-Anne Little

Linton said he’s proud of the coordination and cooperation between the county, the township and public health and said the other mayors in the county are on “the same page.”

“They are ready to step in and do what’s needed as well,” Linton said.

Williamson said public health hopes to have 75% of the population vaccinated by September, but everyone will have to follow public health measures for a while yet, even after they are vaccinated.

“This has been hard on all of us, but this is not the time to let our guard down,” he said.

That means wearing masks, physical distancing, small gatherings only and good hand hygiene are still the order of the day.

“We are in the end game – we will get to the end of this. But nothing will go back to normal until the vaccinations are done,” Williamson said.

For more information about the local vaccination effort visit the WDGPH website. 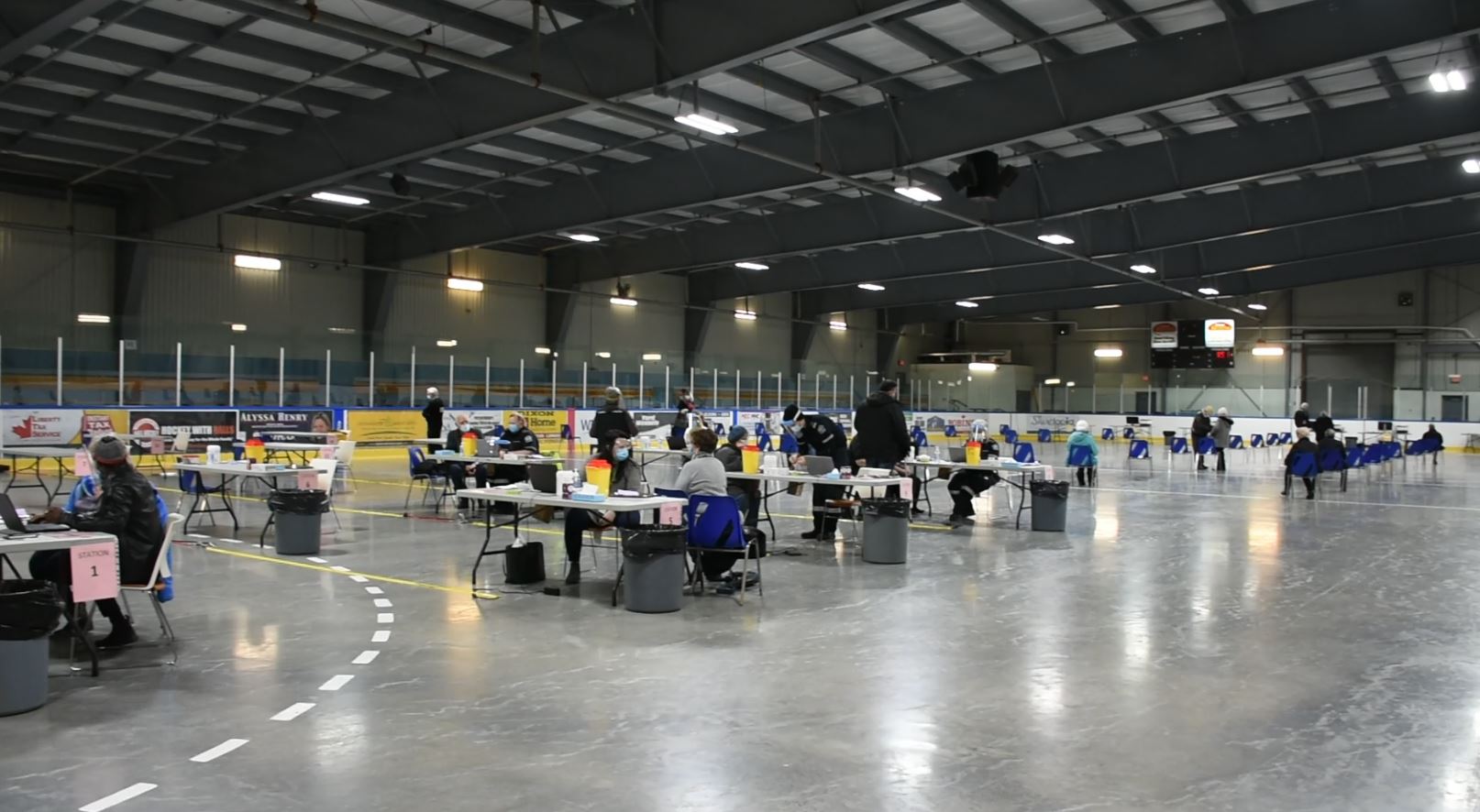 Pad B at the Fergus sportsplex has been transformed into a mass COVID-19 vaccination site. Photo by Lori-Anne Little