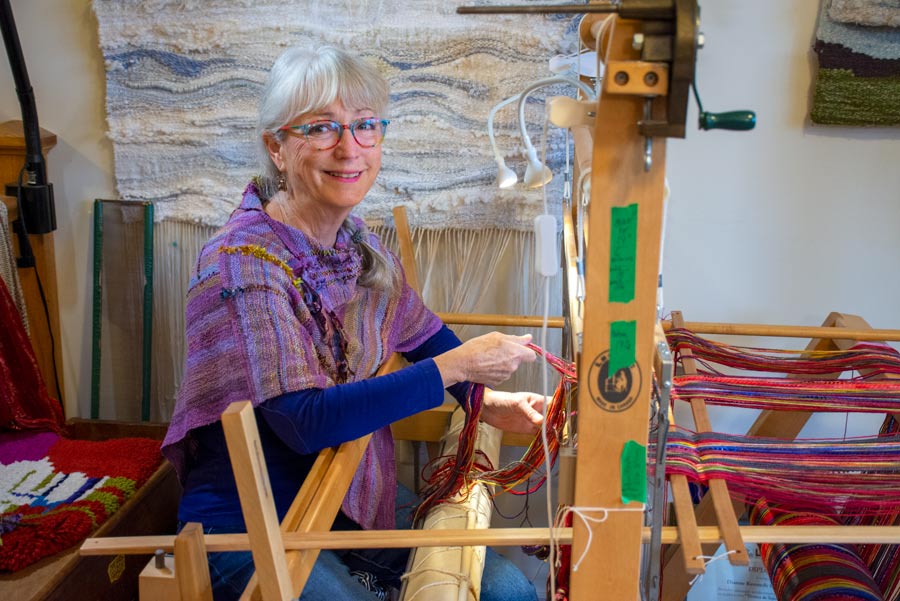 Studio tour - Weaver Dianne Kennedy Cruttenden is one of 39 artists participating in this year’s 33rd annual Elora Fergus Studio Tour. The actual tour takes place on Sept. 28 and 29 as well as Oct. 5 and 6.
Photo by Jaime Myslik

FERGUS – The 33rd Elora Fergus Studio Tour is just around the corner.

With the opening reception scheduled for Sept. 19, artists are preparing for the tour, which will run the weekend of Sept. 28 to 29 and Oct. 5 to 6 throughout Centre Wellington. The studios will be open from 10am to 5pm each day of the tour.

This year there are 39 artists participating and while the majority are within Elora and Fergus boundaries, there are a few artists outside including Alma, Belwood and the outer edge of Fergus.

“It’s (39) artists who open their studios to the public so you can come in and see the work that they do and most people have their studios set up so you can see how they actually work,” explained marketing committee member Dianne Kennedy Cruttenden, a weaver on the tour.

Because the artists are located so close together, she said it’s easy to pack a lot of studios into one day. On a tour in Manitoulin Island, she said the studios were all at least a half hour apart.

“That took forever to catch up and see everybody there,” she explained.

On the Elora Fergus tour many of the studios are within walking distance of each other.

“You can really pack in a lot of various artists in a day or two and then we have it over the course of the two weekends so that gives you four days if you really want to do it all,” Kennedy Cruttenden said.

She suggested starting out at the Elora Centre for the Arts, where every artist on the studio tour will have a sample of their work on display.

“Pick out your favourites and go from there,” Kennedy Cruttenden explained. “There’s a map on [the brochure] so you can highlight where you want to go.”

As an artist, Kennedy Cruttenden said the best part of being on the tour is having contact with people.

“Being an artist is very solitary, unless you have a studio or something … where they have a lot of people and that’s unusual for the artists on the tour,” she explained. “Mostly they’re solitary operations. To get people in and schmooze it’s fun.”

Kennedy Cruttenden also said she personally likes having contact with people because she likes seeing their reactions to her work.

“I take that in and evaluate how … next year I’ll do something different because of the feedback I get,” she said. “I really like showing people how it’s done because a lot of people have no idea and they’re just so curious.”

There are a variety of artists on the tour this year, from painters of different mediums to sculptors, jewellery makers, wood workers, mixed media artists, photographers, decorative glass creators and weavers.

For more information, a list of artists and a map of all the participants, visit elorafergusstudiotour.com.