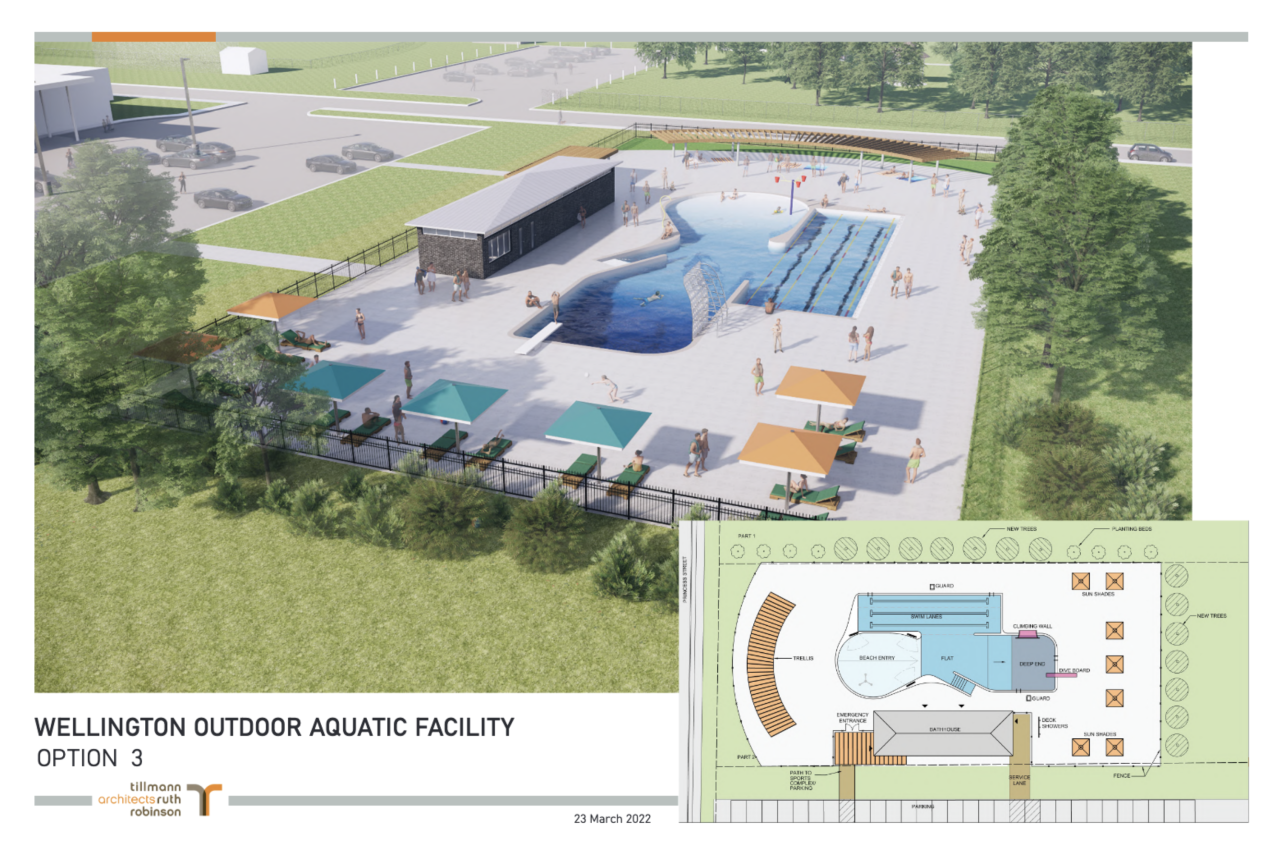 Between April 23 and March 30, 121 individuals responded to 14 questions seeking to understand what residents want from an outdoor pool that would replace the run-down Lion Roy Grant pool. This 3D-rendered conceptual design by Tillmann Ruth Robinson illustrates a combination of two other designs, combining swim and recreation focused elements. The hybrid option was most the most favoured by survey respondents.

WELLINGTON NORTH – The numbers have been crunched from a township survey on a potential new outdoor pool in Mount Forest.

Between April 23 and March 30, 121 individuals responded to 14 questions seeking to understand what residents want from a pool that would replace the run-down Lion Roy Grant pool.

It was recommended, in a 2018 township Recreation Master Plan, that the pool be replaced with a new one, and last year, Toronto-based architectural firm Tillmann Ruth Robinson Inc. was awarded a contract to draw up designs for the replacement, to be located at the Mount Forest and District Sports Complex.

In March, around 30 people came out to the complex for a presentation by Scott Robinson, from the architectural firm, of three conceptual designs.

The survey, distributed in person and online, queried residents on their use of the current Lion Roy Grant pool and what they wanted to see in a replacement.

At a May 10 meeting of the township’s parks, recreation and leisure, and Mount Forest aquatics advisory committees, operations director Matthew Aston said the third concept – a combination of elements from two other designs – was the most popular among survey respondents.

Public swimming is the most popular program offered (56% of respondents), followed by family swimming (50%), and swim lessons (36%).

Fifteen respondents chose an “other” category regarding programming, specifying they watch grandchildren or other family members use the pool.

The majority of people (68%) said health and fitness is the primary reason for visiting the pool, followed by entertainment (55%).

Twelve respondents listed watching family members and attending the pool for birthday parties in an “other” category for the reasons they visit the pool.

There are 66 respondents (54%) who visit the pool at least a few times per month, of which three said they visit every day.

A beach entry to the pool was ranked most favourable by 75 respondents, above a stepped entry option in second place, and a ramp/ladder option ranked least favourable.

When it came to the number of swim lanes, 50 respondents (41%) said the pool should have four, and 19 selected an “other” category, vouching for more than four lanes to accommodate swim teams.

A diving board, sunshades, and a beach entry came out as the top features or enhancements respondents selected from 11 total choices.

Respondents were asked if they had a preference for a spectator section outside of the pool area, in addition to a spectator space on the surrounding pool deck.

There were 57 responses marked “yes,” 22 marked “no,” and 42 respondents were indifferent.

Almost half (47%) feel a speedy drop off at the pool is important, and there are 35 who want to volunteer with pool fundraising efforts, and 35 who want to contribute financially to the pool.

A full breakdown of the data is available at the end of this story.

Jones felt the response was good, but said, “we need to dig in a little bit deeper to understand what that 121 represents,” referring to the total survey respondents.

There were 48 respondents with two or more people in their household who use the pool, Jones explained.

There were also 25 respondents (20%) who said they had never used the pool.

Councillor and aquatics advisory committee chair Sherry Burke said the data provides her committee – tasked with fundraising for pool enhancements – a decent starting point and ideas for what people want.

Burke also said she wants to see elementary school-aged children surveyed to see what makes an enticing pool through their eyes — something the aquatics committee will pursue.

“I think from a staff standpoint we need to look through all of the questions and see what components we can use as a starting point concept,” Aston said.

A fourth design concept – based on the hybrid design favoured in the survey data and incorporating residents’ feedback – will be drawn up by the architectural firm and returned for consideration by the recreation, parks and leisure committee mid-summer.