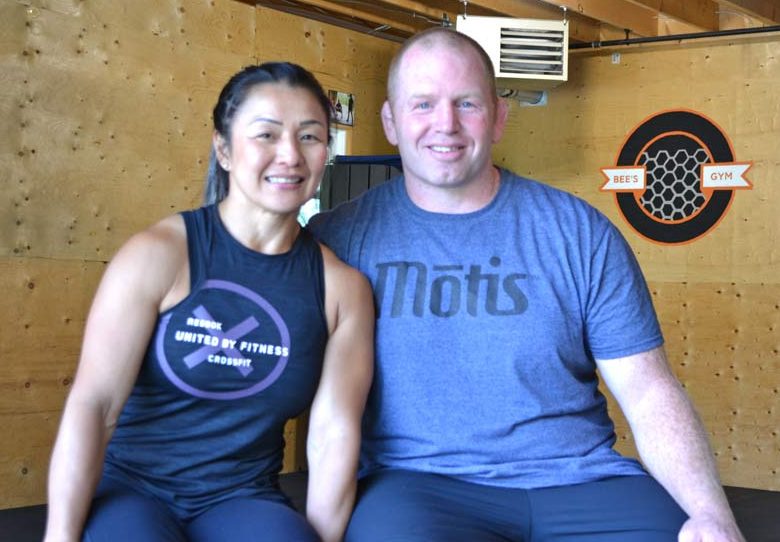 Chris and Belinda Cox both set Guinness World Records this year - she for burpees and he for Turkish get-ups. Photo by Joanne Shuttleworth

SALEM – Belinda and Chris Cox have given new meaning to the term “power couple.”

The Salem couple each set a Guinness World Record for feats of strength and athleticism this year.

Belinda set her record on March 14, completing 775 chest-to-floor burpees in one hour – the most by any woman in the world to date.

Chris said he read the story of Alison Brown of Listowel, who broke the women’s chest-to-floor burpee record last July. She received official word from Guinness World Records in December and that’s when the news broke.

“I had read the story that (Brown) broke the record. Belinda was having a crappy year. She needed something to focus on so I signed her up,” said Chris in an interview at the couple’s home gym.

“I decided not to worry about it until it was a thing,” Belinda added. “Late January I learned I was approved to make my attempt. Then I thought, now what?”

Belinda had six weeks to train for her event and she and Chris worked out a training strategy.

But as Belinda was toiling away, Chris said he decided he needed something to keep him motivated too.

So he applied with Guinness World Records as well.

“I had to put my money where my mouth is,” he said with a laugh.

“I’m not a burpee guy but I do like the Turkish get-up. I signed up the night after (Belinda) did her attempt.”

Burpees are like a push-up only the athlete jumps to their feet and into the air and then back down again.

“They are the most dreaded exercise, but not for me,” Belinda said.

With the Turkish get-up, the athlete starts on their back, raises a kettlebell over their head, and moves to standing position in a particular motion with the weight still raised overhead.

Chris said he alternated arms, which is allowed.

Chris and Belinda began their athletic lives as wrestlers. Belinda moved to Canada from Taiwan when she was 12 and fell into wrestling in high school. Chris grew up in Saskatchewan and has been wrestling since he was eight, he said.

They met in Guelph as both were in the 2000-2004 Olympic cycle. When that ended they tried rugby and later CrossFit.

“This is our common value,” Belinda said. “Fitness, health and sport.”

Belinda taught physical education at a high school in Shelburne and transferred to Centre Wellington District High School in 2019. 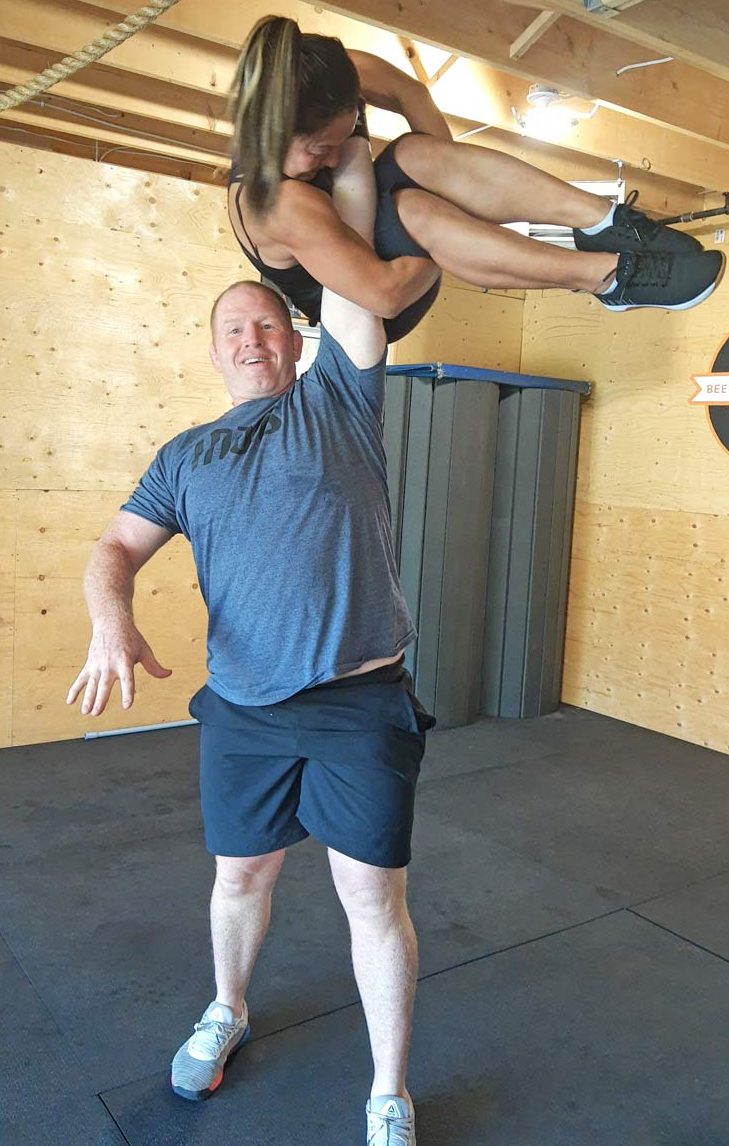 Chris Cox of Salem completes a Turkish get-up lifting his wife Belinda instead of a kettlebell. Photo by Joanne Shuttleworth

“My thing is, control what you can and make the best of the rest,” she said. “During the pandemic year I felt like a fish out of water. So this (setting a world record) was something I could control. And it was really positive. Which I needed.”

Chris is a full-time firefighter in Mississauga and also works with the volunteer cadre in Centre Wellington.

“A lot of our calls were COVID-19 medical calls,” he said. “It was pretty stressful. Training for something allowed me to focus. It’s a good mental break.”

Belinda said she hasn’t met Alison Brown but said Brown reached out to offer congratulations when she set the new record.

“She was so kind. I really related to her story. And I’m sure there’s somebody out there working to break my record,” Belinda said.

Amanda Marcus, PR manager of Guinness World Records North America, Inc., stated in an email that while the numbers have been about the same, the nature of world record attempts has changed during the pandemic.

“Along with a focus on virtual/remote record attempts involving groups, individual time-related records have notably increased (during the pandemic), such as ‘most in a minute,’ ‘fastest time’ and ‘longest time.’”

She added, “These tend to involve typical household items and can be attempted at home or while social distancing.”

The most satisfying part of the experience was working with her husband as a team, Belinda said.

“We set out our game plan together. It was us against the world … We set goals and then tackled them. And to win? How cool is that?”