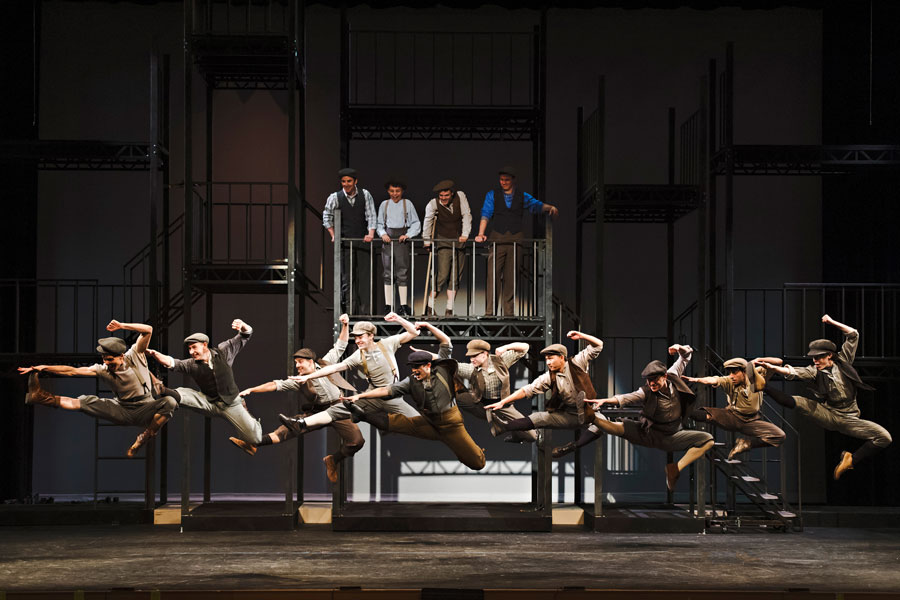 Newspaper history - Newsies is on stage at the St. Jacobs Country Playhouse until Aug. 3.
Submitted photo

ST. JACOBS – A turn of the century New York City hustle is presented on stage in the musical Newsies.

This rousing, passionate performance is especially stirring as the newspaper hustlers are children, and their story is true.

Newsies is inspired by the newsboy strike of 1899 after Joseph Pulitzer of New York World and other publishers raised their selling price.

The street kids who bought the “papes” were already re-selling them at a meagre profit.

These kids were often parentless, living rough and hungry.

Their ensuing battle spoke to working children throughout the city, in every “sweatshop, factory and slaughterhouse.”

Powerful choreography reflecting the theme ebbs, flows and bursts fluently thanks to an immensely talented cast of 22.

Mega-doses of energy infused with emotion in song draws the audience into the story.

Acrobatic, dizzying dance moves keep on coming. Without a weak one in the company, every athletic, appealing character brings flavour to the performance.

Their triumphant spirit is credible and endearing characters such as Romeo, Specs, Race, Buttons, Mush, Elmer, Scab, Les, Davey, Albert and Finch make it so.

The strike is led by 17- year-old Jack Kelly as he rallies his colleagues, convincing them to stop buying the “papes.”

As they recognize, their “part is as important as any reporter or editor” for without them there are no readers.

Though Jack Kelly is a fictional character, there must have been a leader in this famous strike.

That leader would have been a charismatic, bold, sweet dreamer as played by Kale Penny. His spirited, emotion packed performance holds focus. His delivery of the song Santa Fe, his dream place away from “stinkin’ New York City,” is delivered with a longing that is palpable.

His sidekick “Crutchie”, played by Gregory Pember, draws compassion and respect with his role as a disabled cast-off kid remarkably full of spirit and virtue.

Subplots adding interest to the story include ambitious reporter Katherine Plummer having to sidestep her way through a male dominated workplace.

Always using a pseudonym for good reason, she is played by Julia McLellan with a bright energy and clear voice that clarifies much of the story in song.

Stephen Sparks as Pulitzer plays it every bit the privileged, greedy dynamo.

His efforts to increase circulation by sensationalistic reporting had not been very successful.

Going forward from the strike he established The Pulitzer Prize in 1917, an annual award issued by Columbia University for exemplary journalism, music and letter writing.

Playing several characters is Sandy Winsby, the most famous role being Theodore Roosevelt, then governor and champion of the newsboys.

The set by Brian Dudkiewicz is immediately identifiable as a shoddy New York City tenement with moving metal fire escapes allowing multiple views of the performers.

Varying hues of light in the windows add to the realistic feel.  Backdrops appear as if by magic in alternate scenes.

The play is based on the 1992 Disney movie starring Christian Bale as Jack.  It was originally produced on Broadway by Disney Theatrical Productions.

Newsies runs until Aug. 3 at the St. Jacobs Country Playhouse in Waterloo.

Tickets may be purchased in person at any Drayton Entertainment Box Office, by calling the box office toll-free at 1-855-drayton (372-9866), or online instantly at www.draytonentertainment.com.