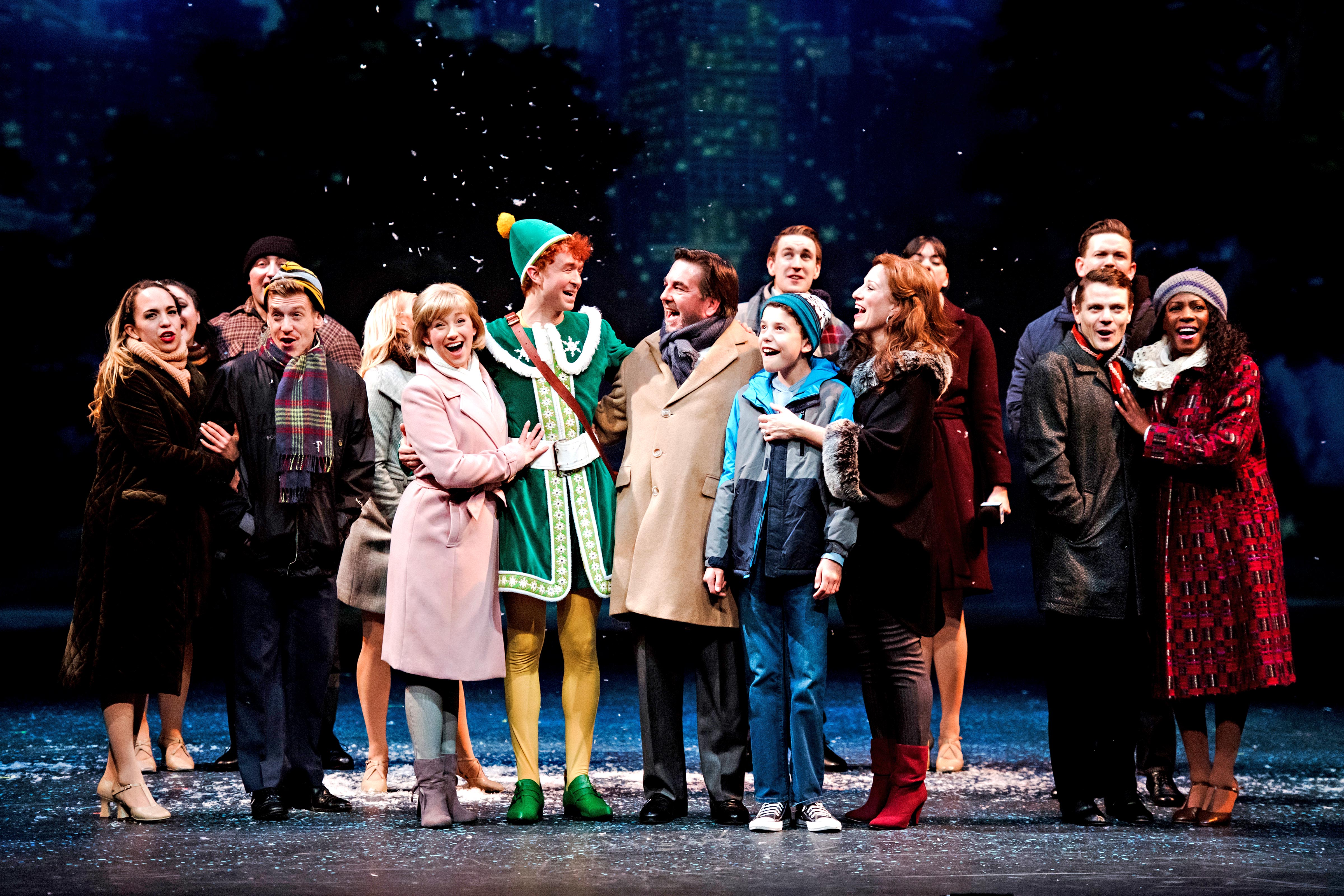 CAMBRIDGE – “The best way to spread Christmas cheer is singing loud for all to hear.”

Fans will immediately recognize that tagline from the 2003 film Elf, as relayed to New York “humans” by Will Ferrell’s character, Buddy.

Elf: The Musical, on stage now at the Hamilton Family Theatre in Cambridge, takes that mantra to a whole new level, resulting in another fun and festive classic – albeit a very different one.

It relays the story of Buddy (played by Tim Porter), who’s mistakenly taken as a baby from an orphanage in Santa’s sack on Christmas Eve. Raised as an elf in the North Pole, the ridiculously upbeat and naive Buddy is shocked to learn as a grown man what his fellow elves have known for years.

With the help of stepmom Emily (Robin Hutton) and brother Michael (Thomas Winiker), Buddy hopes to get close to his dad, a staunch believer that there is no Santa Claus.

Erroneously assumed to be an employee of Macy’s department store due to his festive get-up, Buddy immediately falls for “co-worker” Jovie (Katie Kerr), who also lacks Christmas spirit and has trouble believing Buddy’s crazy back story.

Against all odds, Buddy starts to win everyone over, but a Christmas Eve fight with his dad and a problem with Santa’s sleigh threaten to ruin Christmas.

Porter’s whimsical portrayal, notably in scenes not included in the movie, add depth to the character of Buddy, making him more relatable and less cartoonish but without sacrificing the childlike wonderment that first endeared the character to fans. Acting, singing, dancing and even “skating” – Porter does it all very well with seemingly little effort.

Neil Aitchison is funny and charming as Santa Claus, and outstanding supporting roles are also turned in by assistant director and choreographer Ray Hogg, who plays the Macy’s manager, as well as Winiker, Rudy, Hutton and Kerr.

Gabrielle Jones (Deb/Mrs. Claus) and George Joyce (Mr. Greenway) are great, and special credit should go to the talented and versatile ensemble, which is tasked with myriad costume changes, dance styles and vocal accompaniments.

The creative team, led by director and choreographer Michael Lichtefeld, has obviously provided great direction and its attention to detail is paramount from start to finish. The set and costumes are spectacular, the choreography is impressive and the band is fabulous.

However, the play is a bit light on dialogue in certain sections, it glosses over the Buddy-Michael relationship and completely omits the character of Papa Elf (played by Bob Newhart in the movie).

The production also runs too long for young children and there were a couple minor choreographic slip-ups on opening night on Nov. 21.

As noted, the script (book by Thomas Meehan and Bob Martin, music by Matthew Sklar, and lyrics by Chad Begueli) does diverge quite a bit from the motion picture, but the trade-off is the infusion of musical numbers.

The first half is highlighted by  SparkleJollyTwinkleJingley, a prototypical Christmas celebration song that in a way is a microcosm of the entire production: it’s fun, captivating and infectious. Not to be outdone are the impassioned World’s Greatest Dad and I’ll Believe In You.

The opening musical number of the second half, Nobody Cares About Santa,  is a curious case. It does little to advance the plot and may not be the best image for children (beer guzzling department store Santa’s lamenting the long Christmas season), yet it reinforces the lack-of-Christmas-spirit theme, provides some adult laughs and is wildly entertaining.

Nonetheless, even those not enthralled by its opening will be quick to warm to the second half, thanks to Never Fall in Love (With an Elf), featuring Kerr’s spectacular vocals, and There Is a Santa Claus.

In the end, Elf: The Musical’s shortcomings are more than made up for with an added dose of festive fun.

Drayton Entertainment announced on Nov. 27 that the show has been extended for a second time – it will now play until Jan. 5. But officials say much of the run is already sold out.