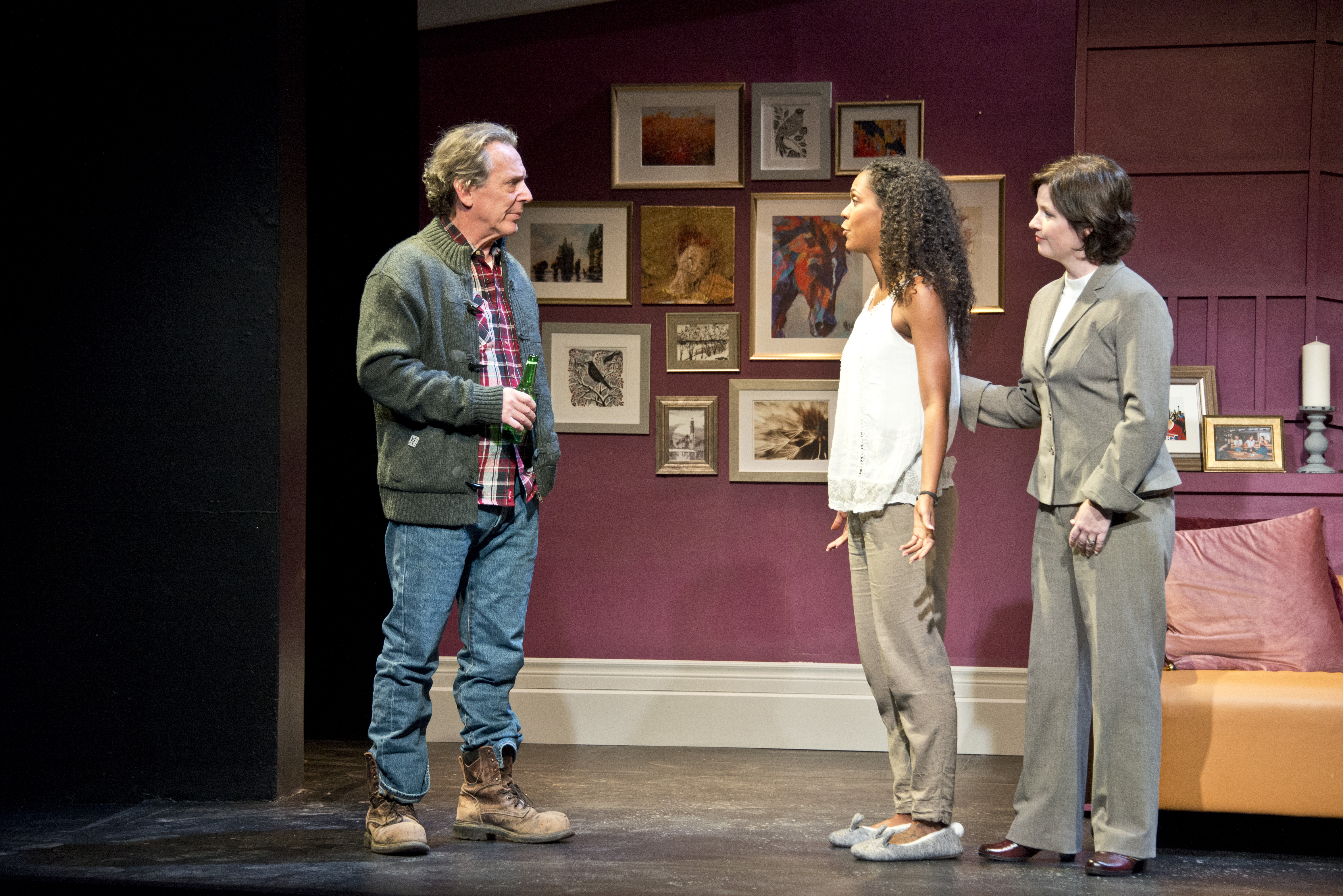 Binding ties - Neil Foster, Joella Crichton and Robin Schisler star in Come Down from Up River, playing at Theatre Orangeville until Nov. 3. Photo by Pete Patterson

ORANGEVILLE – Come Down From Up River is a breath of fresh air – in more ways than one.

Theatre Orangeville’s latest play is yet another comedic treasure from Norm Foster – it is getting increasingly onerous to find the superlatives to describe his unmatched talent – but it’s also somewhat of a departure from the playwright’s other offerings.

Set in Saint John, Come Down From Up River opens with Bonnie (played by Robin Schisler) complaining to her wife Liv (Joella Crichton) about the pending arrival of a visitor: her uncle Shaver (Neil Foster), whom she hasn’t seen in 20 years.

Bonnie is dreading the visit, painting Shaver as an intolerant misogynist from the woods of northern New Brunswick who will not approve of her interracial, lesbian relationship.

Liv, forever the optimist, urges Bonnie to think positive and unexpectedly hits it off with Shaver, who doesn’t  seem to be at all what Bonnie described, despite his gruff exterior.

Yet Bonnie, emotionally scarred by long-ago dealings with her uncle, isn’t convinced Shaver has changed and can’t wait for the conclusion of his visit to town for medical tests. Shaver hopes the “routine” tests will provide an opportunity to reconnect with the daughter of his estranged sister.

All three characters soon discover that things – both past and present – aren’t what they seem, as can often be the case where family and forgiveness intersect.

Schisler is great as Bonnie, the high-strung neat freak whose passion can come off as domineering. But Schisler excels at bringing out Bonnie’s softer side, notably in scenes in which she recounts feelings of abandonment and loneliness.

Neil Foster is terrific, promptly erasing the audience’s pre-conceived notions about Shaver with what appears to be an effortless portrayal of a humble and astute character.

Crichton’s portrayal is remarkably balanced,  deftly illustrating Liv’s inquisitive, personable and excitable side (without overdoing it to the point of annoyance) but also her vulnerability, as evidenced when she relays her method of dealing with racism and homophobia.

Bonnie and Liv don’t show each other a ton of affection – and the few instances seem a bit forced and awkward – but it was refreshing to see real-life diversity mirrored on the stage. Hopefully officials at Theatre Orangeville, and others for that matter, make a point of offering more of these diverse roles/productions.

The second installment of Norm Foster’s “Maritime trilogy” (the others being Halfway There and Lunenberg), Come Down From Up River includes some tearful moments, but it’s also very funny.

And if the phenomenal script and stellar acting weren’t enough, the production offers a few extra hidden surprises, including hilarious playwright’s notes and,  yet again, an amazing set by Beckie Morris (opening night featured, in the middle of the production, an extremely rare spontaneous applause for the set).

Come Down From Up River is first-class entertainment but also an insightful examination of relationships and real-life issues  – qualities not often found simultaneously on the same stage.

Come Down From Up River is on stage at Theatre Orangeveille until Nov. 3. For tickets call 1-800-424-1295 or visit theatreorangeville.ca.